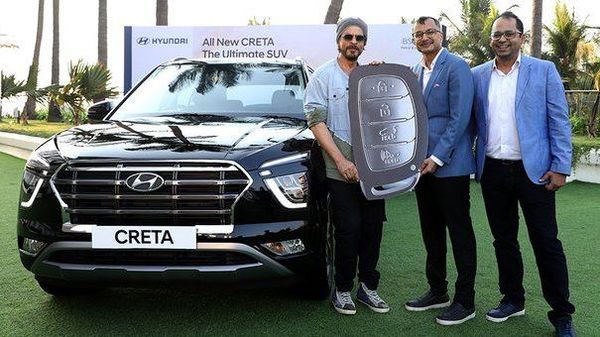 Shah Rukh Khan raved about the 2020 Hyundai Creta when he had unveiled the SUV for the first time at Auto Expo 2020. The King of Bollywood has now become the first customer in India of the second-generation Creta with the company handing over the keys in a small ceremony.

Shah Rukh Khan already has a garage-full of ultra luxury vehicles but had previously said that his fleet also includes the first-generation Creta that was launched in India back in 2015. Interestingly, he was also the first owner of a Creta in the country at the time. He had previously said he loves to drive the car and that his children also enjoy themselves in it. Taking the opportunity, he had lavished praise on the second-generation Creta as well.

Shah Rukh Khan has been a brand ambassador for Hyundai for over two decades. "It's a big honour to be with my Hyundai family," he had said at Auto Expo 2020. "Two things happened in the last 22 years - I had a son and became the brand ambassador of Hyundai India. So I am like the father of Hyundai in India."

The Bollywood superstar who has an unmatched fan following around the world, while praising Creta, had admitted that it is the Santro that is his all-time favourite car.

2020 Creta, however, has the potential to become the new favourite.

The car received more than 14,000 bookings in the first two weeks since these were opened. Hyundai officially launched 2020 Creta on Monday at a starting price of ₹9.99 lakh. It is offered in three BS6-compliant engine options - 1.5-litre petrol,1.5-litre U2 CRDi diesel and a 1.4 turbo petrol.

In its latest avatar, the Creta gets significant design changes which are highlighted by cascading grille and sleeker LED head lights highlight the changes at the front. The rear profile gets sharper LED tail lights and the overall stand of the vehicle is now visibly larger.

It is also feature-packed and gets Advanced Blue Link with over 50 connectivity features. The car had three drive modes - snow, sand and mud while the body structure of the vehicle has been improved to offer more safety.

In India, Creta will battle the enormously popular Kia Seltos and MG Hector.