Many Tesla cars are reportedly allowing drivers to play a selection of video games on their infotainment system even while the car is in motion.
By : HT Auto Desk
| Updated on: 08 Dec 2021, 11:35 AM 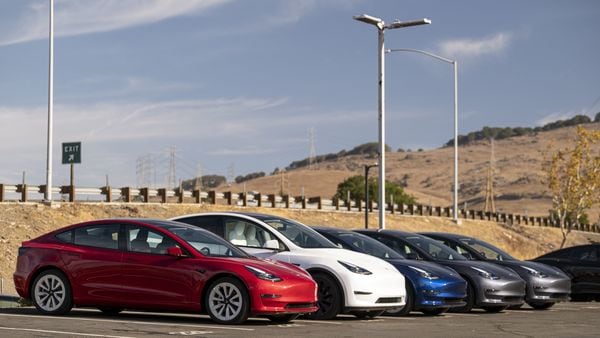 Distracted driving in Tesla cares can result in fatal accidents.

Tesla introduced an interesting feature of in-dash video games that allows the occupants to play video games in some of Tesla cars' infotainment systems. However, this was not meant for playing while driving the car, but while the vehicle is static. However, the latest revelation has shocked the automotive and tech world.

According to a report by The New York Times, many Tesla cars are allowing drivers to play a selection of video games on their infotainment system even while the car is in motion. Such cases can result in fatal accidents on roads.

Tesla rolled out an update earlier this year. Through this update, the automaker let drivers play Solitaire, Sky Force Reloaded and The Battle of Polytopia: Moonrise. The touchscreen reportedly displays a warning before a game of Solitaire starts - "Solitaire is a game for everyone, but playing while the car is in motion is only for passengers." This clearly indicates Tesla is aware that the game is playable while the car is moving.

While the players have to acknowledge that they are a passenger, the driver can tap that button and play the game as well. Also, even if a passenger is playing the game, there is a possibility that the driver will divert his or her attention to the screen. This might result in fatal consequences, considering the fact that distracted driving causes a large number of road accidents and cause many deaths and serious injuries as well.

Combined with the tendency to let the Autopilot semi-autonomous driving system of Tesla cars drive the EV, playing games while the car is running can be a serious issue. There are already several cases reported when Tesla drivers were found putting the car on Autopilot and not attending the steering wheel. Many of these have caused fatal accidents.