The auxiliary systems of the Tesla Model 3 have minimal impact on its range.The integrated lights inside the car cabin does not affect the vehicle's drag coefficiency.
By : HT Auto Desk
| Updated on: 08 Dec 2021, 10:52 AM 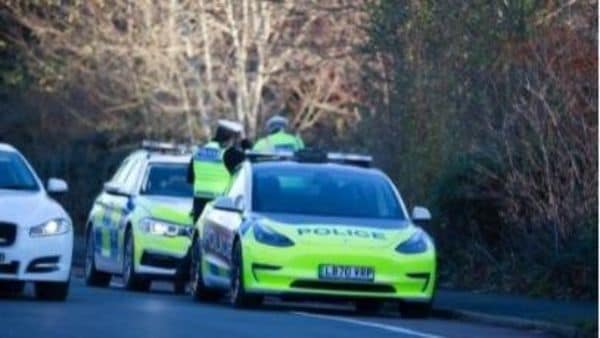 US EV giant Tesla has released findings from its nine-month test program of a Model 3 electric vehicle that the automaker had custom-built as a police patrol car in the UK. Electric vehicles are becoming increasingly popular with police departments and emergency services fleets, especially Tesla EVs.

After testing the vehicle for nine months, Tesla's account manager and emergency services lead posted the results of the Model 3 police patrol car on Linkedin. He mentioned, “(The vehicles have been) 9 months into initial trials with the police we're getting some great results!"

The Model 3 police patrol car can achieve over 200 miles (320 km) of Blue Light advance driving. The auxiliary systems of the vehicle have minimal impact on its range as the Automatic Number Plate Recognition (ANPR) running for 3 hours would take less than a few mile of range off the car while the LED lights could run for days off the battery pack.

The integrated lights inside the car cabin does not affect the vehicle's drag coefficiency and there is no requirement of holes to be drilled into the roof of the vehicle which otherwise would have a negative affect on the cars residual values. Further, the Model 3 police car can be charged in between shifts as it takes less than 20 minutes to juice up to 70% power a V3 Supercharger. This gives the vehicle another 5-6 hours of driving for the shift.

After the vehicle was driven for a total of 15,000 miles, the only maintenance required was for brakes and tyres, which result in minimal running costs. Further, with the help of software updates. the police car gets the ability to send directions to the car via systems such as what3words. The car also gets dash cam, GPS tracking and App access.