BMW Art Cars or the 'Rolling Sculptures' are original masterpieces of art that demonstrate an individual synthesis of artistic expression and automobile design.Since 1975, 19 international artists have created Art Cars based on contemporary BMW automobiles of their times, all offering a wide range of artistic interpretations.
By : ANI
| Updated on: 31 Jan 2020, 12:01 PM 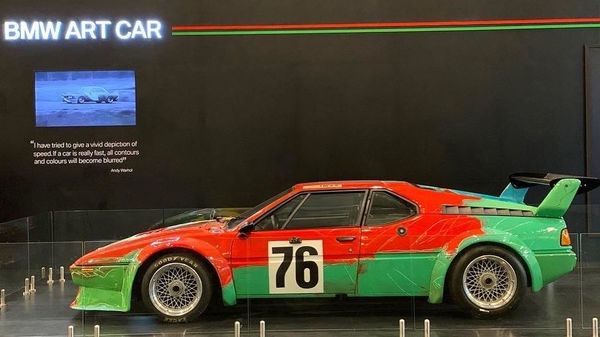 Photo of 1979 BMW M1 Group 4 Race version painted by the renowned American pop artist, Andy Warhol. The art depicts the speed of the car with its vibrant brushstrokes and leaves you open for interpretation. (Photo courtesy: Twitter/@bmwindia)

BMW Group India showcased the 1979 Art Car painted by most renowned American artist Andy Warhol in India. His creation will be exclusively exhibited from 31 January - 2 February 2020 at the India Art Fair in New Delhi.

After Alexander Calder, Frank Stella and Roy Lichtenstein, Andy Warhol created the fourth Art Car for BMW with the BMW M1Group 4 to compete at the infamous 24-hour race of Le Mans.

BMW Art Cars or the 'Rolling Sculptures' are original masterpieces of art that demonstrate an individual synthesis of artistic expression and automobile design. Since 1975, 19 international artists have created Art Cars based on contemporary BMW automobiles of their times, all offering a wide range of artistic interpretations.

We bring to you the work of art on wheels, the #BMWArtCar, a 1979 BMW M1 Group 4 Race version painted by the renowned American pop artist, Andy Warhol. The art depicts the speed of the car with its vibrant brushstrokes and leaves you open for interpretation. #BMWatIAF pic.twitter.com/EyOHPtuqPY

"At BMW, we just don't build the best performing cars, but deeply believe in the intangibles. We hold our design aesthetics very dear, this inspires us as well as our users to stretch their creative boundaries. People love BMW for its superior performance, safety, luxurious experiences, and an underpinning is a design and aesthetic creative sensibility," said Rudratej Singh, President and Chief Executive Officer, BMW Group India.

"To help build and strengthen intercultural platforms of creativity in the field of art, music, design and architecture is therefore very core to us. India Art Fair is a perfect platform for us to reach out to our discerning customers and showcase the brands aesthetics and design philosophy. My personal favourite is the exclusive showcase of the most photographed BMW Art Car in the world - by Andy Warhol," he added.

Singh further said, "It is at India Art Fair and I would urge our fans and patrons not to miss seeing it in person! We bring to India yet another timeless interaction between art, artist and the automobile closer to our customers and connoisseurs of art."

"I love this car. It's more successful than the artwork," was the opinion of Andy Warhol after his sweeping brush strokes had transformed the BMW M1. It took him less than half an hour to create the fourth exhibit in the BMW Art Car Collection. Forty years later, enthusiasm for the mid-engined sports car remains unabated.

Already world-famous at that time, the US icon of Pop Art shared the same passion with many automobile fans of that bygone era. And the fascination of the unique special created by Warhol has indeed increased. Many fans regard his Art Car as the highlight of the entire collection.

A person who declares soup cans a work of art or aspires to have a department store closed so that it may be preserved as a museum for posterity, will not see any conflict between technology and creativity. Consequently, this is how he worked. Instead of first designing a scale model and leaving the final completion to his assistants as his predecessors did, the pop art legend painted the BMW M1 from the beginning to the end himself.

"I have tried to give a vivid depiction of speed. If a car is really fast, all contours and colours will become blurred," said Andy Warhol.

The name Andy Warhol is the quintessence of pop art. Born in Pittsburgh USA in 1928, he studied from 1945 to 1949 at the Carnegie Institute of Technology. He began his artistic career as a commercial artist and was successful in holding his own exhibition in New York as early as in 1952.

In 1956 his work was acknowledged with the coveted "Art Director's Club Award". 1962 saw the creation of the legendary "Factory" - a negation and reversal of traditional artistic ideas as it had never been seen before. His celebrity portraits and paintings of trivial objects became famous. Warhol died in New York in 1987.