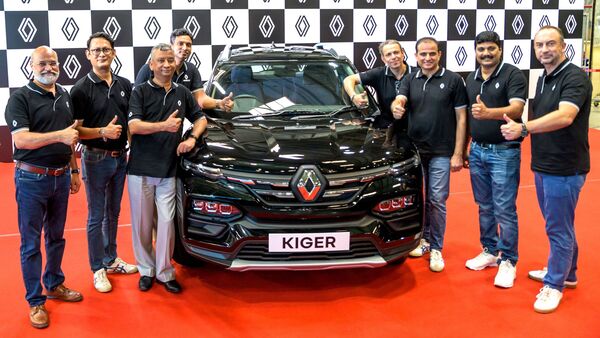 The Renault Kiger is seen here in an all-new Stealth Black shade.

Renault India on Monday informed that it has hit a key production milestone of 50,000 units for its Kiger crossover SUV that was first launched in the Indian car market back on February 15 of 2021. As part of the celebrations, Renault has introduced an additional body colour option - Stealth Black - on the Kiger.

Manufactured at the Renault Nissan Automotive India plant near Chennai, Kiger was launched with a younger car-buying audience as the primary target base. Powered by a 1.0-litre petrol engine mated to three transmission choices - manual, AT and CVT, the Kiger at launch had as many as seven colour choices. Renault claims that the car has been well received in the market here and is faring well even in overseas markets like South Africa, Indonesia, Nepal, Sri Lanka, Mauritius, among others. “Offering a strong value proposition in terms of distinctive design, smart features, leading safety, quality and performance, Renault Kiger has found widespread acceptance among its customers," said Venkatram Mamillapalle, Country CEO & Managing Director, Renault India Operations. “It has proved its mettle in the most competitive compact SUV segment in India and the 50,000th production milestone, despite the pandemic and ongoing semiconductor crisis, is yet another testament to the success of Renault Kiger in this challenging segment."

The segment indeed is competitive and the overall situation in the global automotive space too has indeed been challenging. Renault, however, states that the emphasis attached by the French company to the Indian car market has helped the cause of the Kiger. This is apart from a four-star safety rating from Global NCAP, claim of a fuel efficiency of 20.5 kmpl, young visual highlights on the outside and customization options in the cabin.

Renault Kiger starts at under ₹6 lakh for the base variant here and goes up to around ₹10.57 lakh (ex showroom prices) for the RXZ Turbo CVT Dual Tone variant.