Renault Kiger and Nissan Magnite are the new kids on the block in the sub-compact SUV.Both Kiger and Nissan are coming out of the same plant near Chennai and will have to fight not just against each other but a long list of rivals in the segment.
By : HT Auto Desk
| Updated on: 22 Feb 2021, 12:34 PM 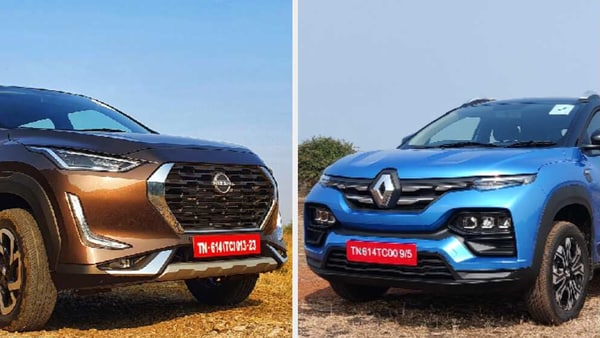 Nissan Magnite (left) and Renault Kiger are promising to take the battle in the sub-compact SUV space to the next level.

Renault Kiger and Nissan Magnite are the two latest challengers in the sub-compact SUV space, one that has a number of established players already vying for attention. The sub-four-meter SUV space has a plethora of options and has been seen favourably by Indian customers for some time now. Little wonder then that even car makers who previously had nothing to show in this segment have now concentrated efforts here.

The Kiger and Magnite are both coming out of Renault-Nissan's Alliance plant in Oragadam near Chennai. And while Magnite has been regarded as a do-or-die product for Nissan in the country, Kiger is looking at building from the success that the likes of Triber and Kwid enjoy.

Kiger is the newest in the segment and has been launched at ₹5.45 lakh (ex showroom) which makes it marginally cheaper than Magnite and therefore, the most affordable sub-compact SUV. The top-of-the-line RXZ 1.0-litre turbo-petrol CVT has a price tag of ₹9.55 lakh (ex showroom). There may not be much to separate the two in terms of pricing but although extremely marginal, Kiger has an advantage over the Magnite.

Magnite is offered in five variants - XE, XL, XV, XV Premium and XV Premium O. There are two petrol engines on offer - a 1.0L motor and a 1.0-litre turbocharged engine. The turbo engine is offered in all except the base variant. It is also offered with a five-speed manual gearbox and a CVT transmission option.

Kiger on the other hand is made available in four variants - RXE, RXL, RXT, and RXZ. It too gets two petrol engine options with a 1.0L naturally-aspirated motor and a 1.0L turbocharged engine. In terms of transmission choices, there is the addition of the AT, apart from what is also offered on the Magnite.

Both Kiger and Magnite have no diesel engines on offer.

Nissan has made an optional Tech Pack available to customers which puts in features such as wireless phone charging, ambient lights, air purifier and more inside the Magnite.

Kiger is made available with five accessory packs - Attractive, Essential, SUV, Smart and Smart+ which, apart from features, adds several highlights like chrome, mud flaps, decals and more, depending on the pack selected.

Magnite is microscopically taller than Kiger and is also wider but is shorter. Both cars have an identical wheelbase and 16-inch tyres.

Magnite is offered by Nissan in eight colour options. This includes five single-tone and three dual-tone.

Kiger gets six colour options and all variants of the vehicle can also be had with a dual-tone colour choice.