Tata announced that the proceeds from this auction will be donated towards the wildlife conservation efforts at Kaziranga National Park.
By : HT Auto Desk
| Updated on: 21 May 2022, 05:43 PM 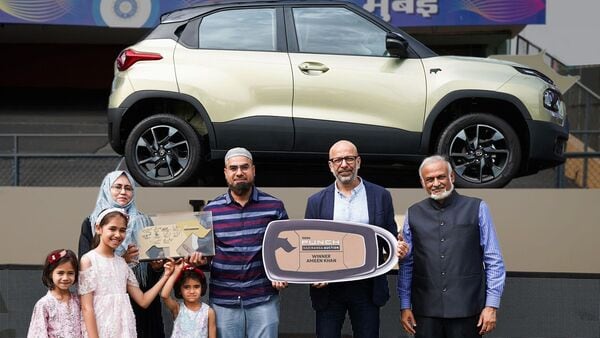 Ameen Khan, from Pune, was announced as the winner with the highest bid.

The company announced that the proceeds from this auction will be donated towards the wildlife conservation efforts at Kaziranga National Park, Assam, as a commitment to conserving the biodiversity in India.

“We are delighted to announce Ameen Khan as the winner of our Tata Punch – Kaziranga Edition auction and we thank him for his generous contribution, which in turn will be used for a cause we deeply believe in. At Tata Motors, we are committed to help preserve the astonishing biodiversity of our country, a pledge we have endeavoured to meet, by consistently working on our offerings, our engagement with various stakeholders as well as through various initiatives," said Rajan Amba, Vice President, Sales, Marketing and Customer Care, Tata Motors Passenger Vehicles Ltd.

The company organised the vehicle key handover ceremony at the famous Wankhede Stadium in Mumbai. Khan also received tickets to the Tata IPL league match in Mumbai along with the car. In addition, he also received a unique Rhino plaque signed by the captains of all the Tata IPL teams, as well as an all-expense-paid trip to the Kaziranga National Park.

“With the proceeds going towards ensuring the ongoing conservation and well-being of the Kaziranga National Park, we have taken yet another step towards this promise. I congratulate Khan for his brand new Tata Punch and thank him again for recognizing our efforts and playing an active role in safeguarding our mighty national parks," he added.