While the new-gen XUV500 will be launched first in India, it will be closely followed by the 2021 Mahindra Scorpio.The new Scorpio will be based on Mahindra's new ladder-on-frame chassis shared with the new-gen Thar.2021 Scorpio is expected to be launched in India in the second half of 2021.
By : HT Auto Desk
| Written By : Prashant Singh
| Updated on: 04 Mar 2021, 09:48 AM

The new Scorpio is expected to be launched in India in second half of 2021. (Image Credits: Youtube/Power Stroke PS)

Mahindra is gearing up to introduce new cars in its portfolio. After the new-gen Thar SUV, the homegrown automaker is now planning to launch all-new Scorpio and XUV500 in the country. While the XUV500 will be launched first, it will be followed closely by the Scorpio.

(Also Read: Mahindra cars may become costlier in Q1 next fiscal. Here's why)

The latest 2021 iteration of the Scorpio has now been spotted once again in the clearest images available to date. The images throw light on the front fascia of the all-new Scorpio which can be seen sporting a new and bolder seven-slat grille at the front. The main grille is flanked by updated headlamp units which are also integrated with DRLs. Lower below, the front bumper is new too, albeit the front fog lamps are fully covered with camouflage for obvious reasons.

The rear angle shows a slightly raked rear glass panel while the tailgate also appears to be fairly new. The taillights have been covered and it won't be a surprise if they are full-LED units. The test unit can also be seen rolling on 17-inch multi-spoke alloy wheels which make the SUV look bold.

The new SUV will be underpinned by Mahindra's new ladder-on-frame chassis shared with the new-gen Thar. This will result in making the Scorpio longer, wider and taller. The wheelbase on the new SUV will also be slightly longer which will enable the Mahindra designers to carve out more cabin space inside the new Scorpio. 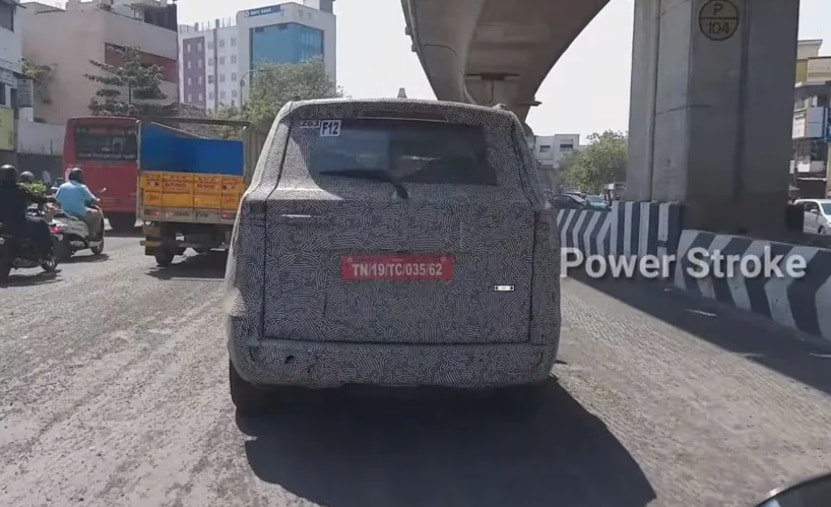 The new Scorpio is expected to be longer, wider and taller. (Image Credits: Youtube/Power Stroke PS)

It will draw power from the company's new 2.0-litre mStallion turbo petrol engine which is featured in the new Thar. Expect it to pump out 150 PS of maximum power and 320 Nm of peak torque on the new SUV. Other than this, it may also receive the new BS 6-compliant 2.2-litre mHawk diesel. The transmission options may include a 6-speed manual as well as an optional 6-speed torque convertor automatic unit.