The report said that about 22.5 per cent of the consumers who were planning to buy a new car last year would now prefer to buy pre-owned car because of their limited budgets.
By : IANS
| Updated on: 03 May 2020, 08:44 PM 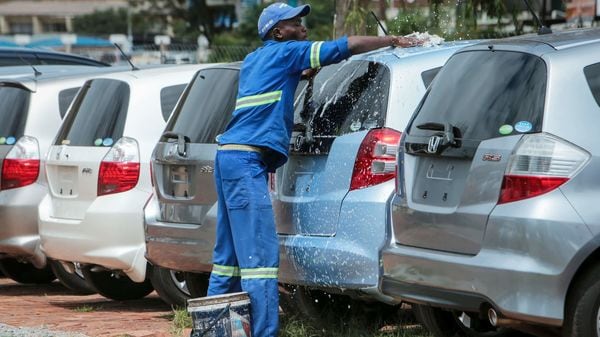 A worker photographed while he washes cars. (Representational File Photo)

The number of people interested in purchasing a used or a pre-owned car has increased in the wake of the coronavirus crisis, according to a report by CARS24.

The report said that about 22.5 per cent of the consumers who were planning to buy a new car last year would now prefer to buy pre-owned car because of their limited budgets.

It further said that a considerable share of the commuters will now look forward to using private cars in the post-Covid world to essentially maintain social distancing, although, affordability and convenience of public transport will keep attracting daily commuters.

"46 per cent respondents said that they have decreased their budget due to the global pandemic, out of which, 50 per cent said that they will be purchasing pre-owned cars once the lockdown is over. In another interesting finding, 22.5 per cent of the consumers who were planning to buy a new car last year would now prefer to buy pre-owned car because of their limited budgets," it said.

Gajendra Jangid, co-founder and CMO, CARS24 said: "Global pandemic has surely transformed the way we used to live and has forced us to think of making a change in our usual practices, including the way we used to commute. Understanding that social distancing will stay in our lives for a little longer in the post-Covid world, people are more inclined towards owing a private vehicle to commute in the future."

He noted that they are not only limiting their budgets for high-priced assets but are also planning to invest their hard-earned money much more wisely and are keener to buy a pre-owned car instead of a new one.

"Expecting the change and the way people will buy cars in future, we expect that 1/4th of our consumers would like to shift to online car selling/ buying platforms in the post Covid world," Jangid said.

In addition to the reduction in the budget of the buyers due to the pandemic, family requirements and the risk of infection have emerged as the major reasons for buying a car among the consumers.

The report revealed that while 42 per cent feel that they now need to buy a car for the family, 53 per cent of the consumers think of buying one within next six months.

However, unlike metros where consumers intending to buy cars increased by 41 per cent, respondents from non-metro cities feel that they would like to switch to two wheelers instead. The analysis further revealed that 55 per cent of the consumers who were using cabs as their primary mode to commute before Covid would now like to shift to private cars while 15 per cent said that they will switch to two-wheelers.

(Also Read: Driving in Green Zone during Lockdown 3.0? Here's all you need to know)

The survey was conducted through various digital platforms for over 3,600 consumers in 11 metros and 37 non-metro cities to understand their sentiments towards car ownership in the post Covid world, CARS24 said.