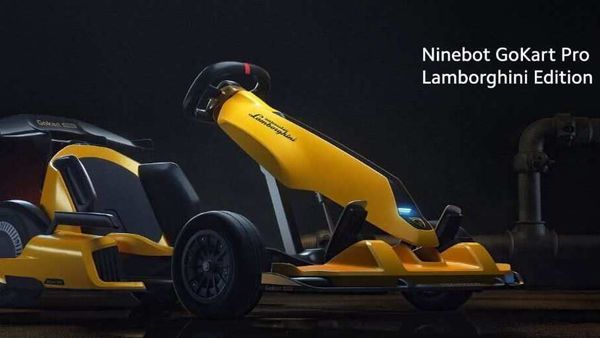 Xiaomi recently showcased its Ninebot GoKart Pro with a special Lamborghini edition as part of its 10-year anniversary celebrations. The Chinese company said it is a result of an official tie-up with the Italian supercar maker and that it is all-electric with a top speed of around 40 kmph.

Featuring a 432wh battery pack at its heart, the Ninebot GoKart Pro Lamborghini edition is dressed in trademark 'Giallo Orion' yellow hues and sports LED headlights and an audio set up that mimics the roar of Lamborghini engines. The tires are custom-made to offer better drift performance while the kart gets Lamborghini decals to establish the tie-up with the Sant'Agata Bolognese-based car maker.

Xiaomi claims that its Ninebot GoKart Pro Lamborghini edition is good enough to last 62 laps of a 400-meter circuit at top speeds.

While the regular edition of Ninebot GoKart Pro has been on sale in several markets around the world, the Lamborghini edition was launched in China for 9,999 Yuan (approximately $ 1,479 or ₹1.10 lakh).

It is not yet clear if Xiaomi will offer the special edition to prospective customers outside of China but the kart has managed to create a whole lot of buzz on social media channels.