The new Toyota Yaris Cross Hybrid SUV has been revealed. It was originally slated to debut at the Geneva motor show this year but the event was cancelled due to the Covid-19 pandemic.

Its exterior design and styling was honed at the company's design studios in Japan and Europe.

Is it an all new SUV?

As the name suggests, the B-SUV is based on the Toyota Yaris hatchback that's sold in the international market. It's been positioned under the company's C-HR model and features the supermini’s wheelbase which spans at 2,560 mm (100.8 inches).

The overhangs have been stretched which has resulted in the overall increment of its length by 240 mm (9.4 inches) to 4,180 mm (164.5 inches). Moreover, in comparison to the Yaris hatchback, it is also 20 mm (0.8 inches) wider and 90 mm (3.5 inches) taller. On the other hand, when compared to the Toyota C-HR, it is still smaller in dimensions.

It rides on wheel-sizes extending up to 18-inches.

It boasts the same 115 PS, 1.5-litre petrol-electric hybrid Atkinson cycle powertrain borrowed from the Yaris supermini. The company claims that the IC powertrain delivers a thermal efficiency of up to 40% and is capable of powering the SUV alone in front-wheel-drive mode.

Also, when the sensors recognize wheel slip or poor grip conditions, the vehicle automatically comes into AWD mode and assist the driver to tackle challenging drive conditions. As per official claims, in the 2WD configuration the model's CO2 emission has been recorded lower than 120 g/km, while in the AWD configuration, the SUV emits below 135 g/km per the WLTP regime. Fuel-economy figures are yet to be revealed. 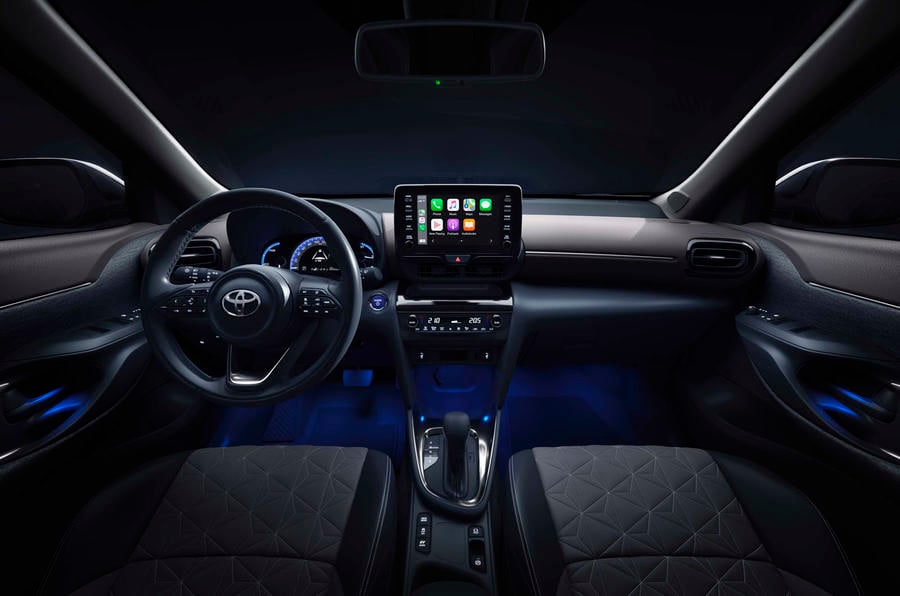 Some of interior highlights of the Toyota Yaris Cross Hybrid include free-standing infotainment display, ambient lighting, and three-spoke multi-function steering.

How about the interiors?

Inside, the Yaris Cross gets a very premium looking and stylish cabin which features ambient lighting, a free-standing infotainment screen and lots of bits sourced from the European-spec Yaris supermini. It's offered with the latest version of Toyota's infotainment system which supports Apple CarPlay and Android Auto connectivity.

On the other hand, its select additions over the hatchaback includes an adjustable floor and split-folding rear seats which the company says 'adds to its practicality'.

For the first time 'Yaris' name plate will be used in Japan since the hatchback is originally known by the name Vitz in the home market. The new Toyota Yaris Cross Hybrid will be manufactured in France.

Will it come to India?

It is too soon to comment on its Indian arrival, chances are less likely though.