Before being allowed inside, each Toyota worker had to pass through one of the tents for a temperature check.Only staff with no health problems or personal obstacles to working were allowed back and operations restarted in phases with smaller teams at first.
By : AFP
| Updated on: 22 Apr 2020, 12:42 PM 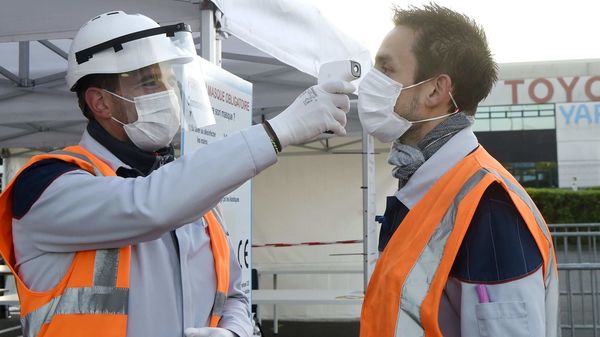 File photo: Supervisors of Toyota company control the temperature of employees on April 21, 2020 in Onnaing, northern France, during the partial resume of the production at the automotive site, amid the spread of epidemic Covid-19.

Large white tents greeted workers at a Toyota factory in northern France when they arrived back to work Tuesday after weeks of closure due to the country's strict coronavirus-busting lockdown.

Before being allowed inside, each worker had to pass through one of the tents for a temperature check -- a high reading being one of the first warnings of infection with the virus that has killed over 20,000 people in France to date.

The site at Onnaing was the first car plant to reopen in France even as confinement measures that have closed all non-essential businesses and battered the economy remain in place until May 11.

"It's reassuring," said Maroua Ryad, 23, who works in production control, as she passed through the tent where workers each received a bag containing face masks, a bottle of sanitising hand gel, and a pen to avoid the need for sharing.

"It is better to restart little by little than all at once on May 11," she added.

The factory closed on March 17, the date that France's lockdown entered into force, compelling people to stay at home except for essential outings.

Under the measures, industrial producers are allowed to continue operating as long as protective measures have been put in place.

Social distancing between people is a key pillar in the strategy to limit virus spread, along with hygiene measures such as regular hand cleaning and covering the mouth when coughing or sneezing.

The Onnaing factory is the only plant of Japanese firm Toyota in France, and employs about 4,500 people.

Only staff with no health problems or personal obstacles to working were allowed back Tuesday, and operations restarted in phases with smaller teams at first.

From 500 staff on site Tuesday, the plant expects to have about 1,400 by Thursday for production to resume, with daily production of 50 cars per day at the start, compared to a thousand daily before the outbreak started.

(Also read: How to resume business operations? Toyota comes up with 'Restart Manual')

In the workshops, marks on the ground indicate the direction of foot traffic and encourage everyone to keep to their right in an attempt to minimise the risk of workers getting too close to one another.

Collective water fountains have been replaced with individual bottles, vending machines put out of service and the catering service cancelled.

Special rubbish bins are provided for used masks, and plastic screens were erected in some areas of the work floor to separate workers.

On the assembly line, some were busy making plastic visors with newly-acquired 3D printers.

Thomas Mercier, a representative of the CFDT union, judged the measures "sufficient", while adding "there is still worry among some of the workers".

But the more radical CGT union denounced what it described as an "irresponsible" move.

Plant workers "are immersed in the population and this is dangerous for us, our families and the entire region," said CGT leader Eric Pecqueur.

"The shareholders of Toyota are putting profits above our health," he charged.

The company said protective barrier measures will remain in place for several months at least.

European automobile sales fell by 55 percent last month due to coronavirus lockdown measures, according to the European Automobile Manufacturers Association.

On Sunday, French Prime Minister Edouard Philippe warned the country was "not out of the health crisis yet", and insisted the lockdown must be strictly respected until May 11, when it will start being lifted in phases.