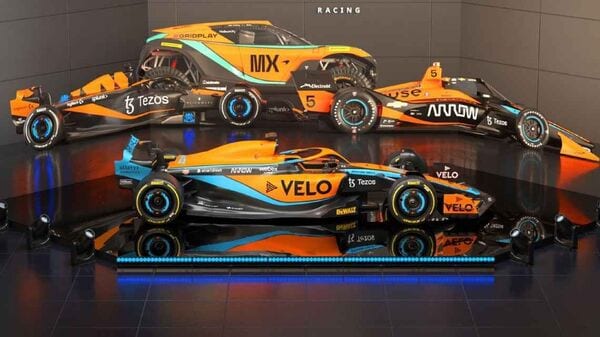 McLaren claims the MCL36 has more styling elements to be revealed.

McLaren is the latest Formula One team to unveil its challenger for the 2022 F1 season. The Formula One team has unveiled its McLaren MCL36 in a new orange and blue livery inspired by the one-off Gulf livery that was seen at the 2021 Monaco GP.

The McLaren MCL36 will make its track debut during pre-season testing at the Circuit de Barcelona-Catalunya on February 23-25.

The new McLaren MCL36 race car aims to capitalise on the regulation changes that have been incorporated in this season by FIA. Interestingly, these are the most number of changes introduced to one single season in three decades. The organisers claim that these changes have been devised to encourage closer racing, with increased ground-effect that is intended to substitute for a reduction in wing-generated downforce.

The FIA and F1 have rewritten the rules of Formula One in 2022. The all-new Formula One race cars this season will come featuring a ground effect floor, simplified front wing and dramatic rear wing. Other changes introduced to the new 2022 Formula One cars include larger Pirelli 18-inch tyres in the 2022 championship. This is the first time, F1 race cars will run on 18-inch wheels instead of shorter 13-inch wheels.

The larger wheel and tyre package is one of the major developments for the 2022 season. This would enhance the edgy limit-handling capability of the F1 cars, significantly higher than last year's model. The larger wheels will ensure comparatively lower downforce levels, lengthen braking zones and will create overtaking opportunities. The new regulations have incorporated new over-wheel winglets and wheel covers.

McLaren MCL36 uses pull rods and has a subtle and elegant profile through its Coke-bottle midriff. The design of the McLaren MCL36 is expected to evolve further before the first race scheduled in Bahrain. McLaren has already said that it is yet to reveal more bits and pieces.

As has been the case with all F1 2022 reveals so far, Key does say the design will evolve considerably before the first race at Bahrain. McLaren has also said that this same car will run in Barcelona. McLaren MCL36 will draw power from a Mercedes-sourced engine, in form of MCL35M.