Maruti is likely to launch the WagonR facelift later this year with several updates. It is likely to get the new infotainment system and other features from 2022 Baleno.
By : HT Auto Desk
| Updated on: 16 Feb 2022, 03:37 PM 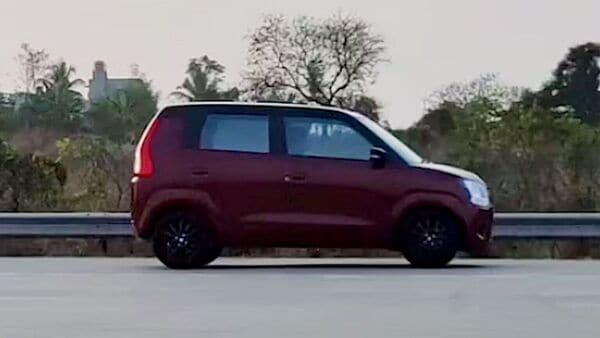 Maruti is likely to launch the facelift version of the WagonR hatchback later this year. It was spotted during a commercial shoot recently. (Image courtesy: Instagram/@Mantram S Shetty)

Maruti Suzuki is likely to drive in the facelift version of its popular hatchback WagonR later this year. A new WagonR model was recently spotted during a commercial shoot, hinting at its imminent launch.

Maruti WagonR, which is currently in its third generation, was launched back in January, 2019. It is currently available between ₹5.18 lakh and ₹6.58 lakh (ex-showroom) spread across 14 variants with the choice of two engines and two transmission options.

The model being shot during commercial shoot does not indicate too many changes on the outside barring a blackened roof, indicating a new dual-tone exterior, and the new set of alloy wheels too.

Maruti is expected to incorporate several changes on the inside borrowed from the upcoming 2022 Baleno hatchback. The WagonR facelift model, therefore, is likely to get the new 9-inch digital touchscreen infotainment system seen inside the new Baleno. Expect other changes in terms of interior features, including the upholstery, when launched.

The 2022 Maruti Baleno, which is all set for launch later this month, will bring in a host of changes which are expected to be used in other Maruti cars soon. Some of the features, like the HUD screen, are segment-first features, and is likely to help increase WagonR's attractiveness in the small car segment.

The engine options for the new WagonR facelift is likely to remain the same. Maruti is also expected to continue with the regular five-speed manual gearbox or the four-speed automatic transmission in the facelift version of the WagonR as well. Maruti may also make certain changes to make the new WagonR more fuel efficient.