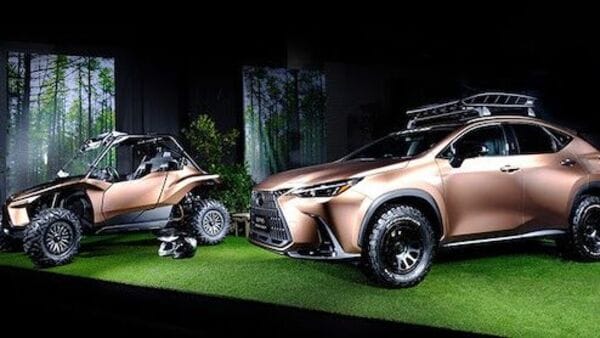 The Lexus concept vehicles are claimed to have been inspired by nature.

The automaker claims that the NX PHEV Offroad concept comes as a customisation concept and is inspired by an adventurous lifestyle. On the other hand, the ROV concept comes connecting nature with a unique driving experience unlike any passenger car, claims the luxury car brand owned by Toyota.

The automaker also claims that both these concepts have been designed and developed pursuing a balance of exhilarating driving with a fun, refined lifestyle while living in harmony with nature. Lexus will also showcase other models at the event that includes a 1/3 scale Lexus aircraft model developed by Yoshihide Muroya, who will participate in the World Championship Air Race this year.

Lexus also said that these concept vehicles come embodying the automaker's efforts to realize a carbon-neutral society, expand customer choices, challenge to suggest diversifying and expanding lifestyles, and provide new values that exceed expectations. It further added that these concepts have been developed with an aim to balance the refined lifestyle and driving pleasure that cars provide while living in harmony with nature.

The Lexus NX PHEV Offroad concept is based on the automaker's first PHEV vehicle that went on sale in November 2021, the NX 450h+. The concept gets BEV and PHEV modes that is claimed to offer refined driving performance and excellent environmental performance while reducing CO2 emissions. It is also claimed to offer reliable driving performance powered by an electric motor on low-friction roads. The body of the concept gets a customized bronze and matte black paint scheme. It gets all-terrain large tyres. The ROV Concept gets a compact body and it is the first Lexus vehicle to use a hydrogen engine, claims the automaker.