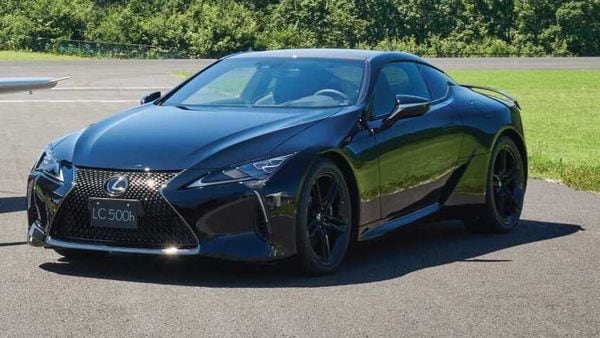 Lexus India has launched a limited-edition model of its sports coupe - the LC 500h - in India at a starting price of ₹2.15 crore. The company says that the coupe's highlight is its refined aerodynamic performance.

The grand-touring coupe's special edition features aviation-inspired design language borrowing from an earlier partnership between air race pilot Yoshihide Muroya and Lexus engineers that helped him win the 2017 Red Bull Air Race World Championships. A team consisting of the same engineers worked on the design of the Lexus LC 500h.

The vehicle gets carbon-fibre roof and rear air wing spoiler inspired by air racing that helps it achieve greater steering responsiveness and stability. Carbon-fibre accents run throughout the vehicle along with other accessories.

In order to evoke the image of a bird, the sports coupe gets black ornamentation on garnish, grille, rear wing and wheels so as to to create a sharp and taut impression. It has been made available in three exterior colours - White Nova Glass Flake, Sonic Silver, and Black.

On the inside, the cabin boasts of black Alcantara-trimmed sport seats that feature elegant Saddle Tan accents and seat belts. The steering wheel and shift lever are also accented in black Alcantara trim and a carbon-fiber scuff plate accents the doors. The LC's silhouette and the exclusive badgings that read 'LC Limited Edition' and 'LEXUS' have been integrated by a carbon-fiber scuff plate, enhancing the look.

Lexus says that the vehicle has been equipped with 21-inch black forged-alloy wheels that help in creating lower drag co-efficient but provide the same level of rigidity. The coupe continues to source power from the 3.5-litre, six-cylinder hybrid engine. "With its bold, aviation-inspired design language, (Lexus is) confident that (the limited-edition LC 500h) will be well received by the discerning guests who value and appreciate the quality of finer things in life," said PB Venugopal, President of Lexus India.