Lamborghini teases its ‘mystery car’ ahead of launch on July 8

The teaser images reveal that the upcoming hypercar will have hexagonal taillights and huge tailpipes which are also hexagonal in shape.
By : Sabyasachi Dasgupta
| Updated on: 07 Jul 2020, 03:03 PM 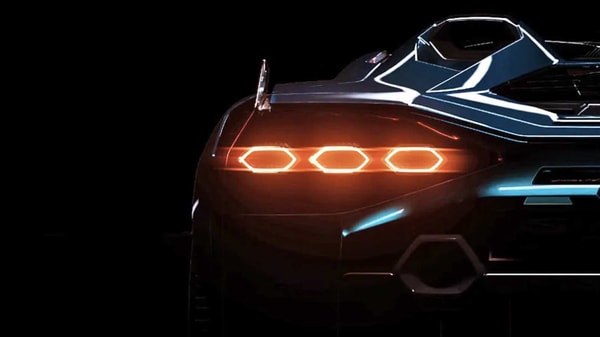 The mystery car from Lamborghini will have hexagonal taillights and tailpipes. (Photo courtesy: lamborghini.com

Lamborghini is all set to drive in its new hypercar on July 8. Ahead of the launch, the luxury sports carmaker took to social media to tease the upcoming ‘mystery car’.

Lamborghini shared two images which partially reveal the new sports car. The sports carmaker claims it ‘will be ahead of its time’.

Very little is known about this upcoming car as there have been very few leaks about it so far. The carmaker has been very tight-lipped about revealing any details on the new sports car. However, based on the teaser images shared by the carmaker on its website, it can be said that the new sports car will hexagonal taillights and huge tailpipes which are also hexagonal in shape. The second photo, shared on social media platforms, shows in detail the rear spoiler, proudly embellished with the writing "Made in Sant'Agata Bolognese". It also shows that the rear part has been modified with new flaps and a different design.

The future is here, and it is unlike anything the world may have seen before. Get ready to witness the official unveiling of our latest creation at 6 PM CEST on July 8th, 2020 on https://t.co/4SLPw939p1, and our YouTube channel.#Lamborghini #AheadofItsTime pic.twitter.com/5yEXz5a3Ye

Certain details, like rear optics or the central exhaust outlet, are clear indications that Lamborghini’s upcoming ‘mystery car’ has unmistakable similarities with the Sian FKP 37 Roadster.

The new hypercar is likely to be powered by a 6.5-litre V12 engine, 785 hp with a rotation limit of 8,500 rpm and a mild 48 volt hybrid system, output 34 horsepower that draws energy not from a lithium-ion battery but from a supercharger. The combined performance of the whole is 819 horsepower, with the electric motor allowing the car to move exclusively with it at low speeds, as in reverse and when parking. It is likely to clock zero to 100 kmph under 3 seconds and have a top speed of around 350 kmph.