Lamborghini has teased the Huracan Sterrato supercar as an all-terrain vehicle. The Italian carmaker is likely to take the covers off later this year.
By : HT Auto Desk
| Updated on: 26 Jul 2022, 15:43 PM 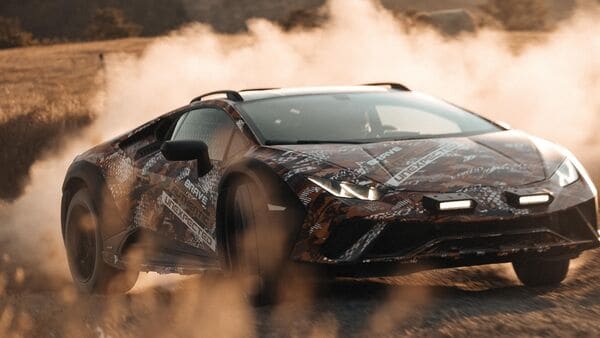 Lamborghini Huracan Sterrato is based on the Huracan Evo. It comes with a V10 engine that can generate 640 hp of power, offers all-wheee drive, all-wheel steering as well as torque vectoring.

Lamborghini Huracan Sterrato Concept, termed by the carmaker as ‘Brave, Authentic, Unexpected’, is likely to be one among the four new products announced a few months ago by Stephan Winkelmann, CEO at the Italian car manufacturing company. The unveiling could happen as early as next month. According to reports, the production number of Lamborghini Huracan Sterrato is likely to be limited to between 500 and 1,000 units.

Earlier in 2019, Lamborghini had showcased a prototype vehicle that offered all-terrain capabilities. The Huracan Sterrato Concept is the closest production version of that car. The all-terrain supercar is expected to come with a 5.2-litre naturally aspirated V10 engine. It is capable of churning out 640 hp of maximum power and 600 Nm of peak torque. Lamborghini is also likely to offer four-wheel drive, all-wheel steering and torque vectoring in the Huraan Sterrato.

The Huracan Sterrato has been spotted earlier doing test runs in Europe. This is the first time that Lamborghini has shared some details about how it performs beyond asphalt or concrete tracks. The video shows the Lamborghini Huracan Sterrato Concept, wrapped in a camouflage, ploughing through a dusty road. It has redesigned side air intakes, tweaked bumpers and a set of 20-inch alloy wheels among certain key exterior features. Expect the Huracan Sterrato to have stiffer suspension than the standard Huracan models.

Lamborghini Huracan Sterrato will be the last ICE model under the brand. It is expected to be replaced by a plug-in hybrid model in the next couple of years.