Kia Motors is gearing up to showcase Sonet and announced last week that the world premier of the sub-compact SUV will take place on August 7.
By : Sabyasachi Dasgupta
| Updated on: 21 Jul 2020, 08:52 AM 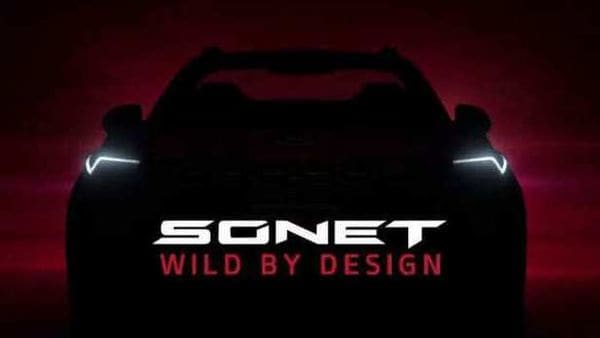 Kia Motors has teased its upcoming subcompact SUV Sonet ahead of its world premier early next month. The teaser image and video highlight some of the features the production version of the SUV will have.

The image shared by Kia Motors is a silhouette of the Sonet SUV with the LED lightbars shining bright. The silhouette suggests broad shoulders for the SUV and thin sharp LED lightbars to dominate the front look. There is no image of how the grille will look, but Kia is likely to stick to its traditional tiger-nose grille as was showcased in the concept version. Sonet was first showcased in concept form at Auto Expo in February of 2020.

There is also a clipping shared by Kia Motors of the Sonet SUV's design at the rear. The taillights, wearing similar design like the DRLs at the front, will be joined through a reflector strip running across the breadth of the SUV's boot. There will be roof-rails, a roof-mounted lip spoiler, rear wiper and rear-set antenna as well on the Kia Sonet SUV.

In terms of styling, Sonet does borrow certain elements from Seltos and has a trademark prominent grille up front. Kia has also promised several segment-first features including a clutch less manual transmission unit. It is perhaps because of Sonet's imminent launch that Hyundai recently brought out the iMT technology in the Venue. Sonet's other highlights may similarly force other rivals to re-look at what their respective products may lack.

He's got the guts. She's got the looks. Beyond that, they've got something that's wilder than your imagination. Taking you on a wild adventure in their all-new #KiaSonet. Catch the #SonetWorldPremiere on 07th Aug 2020.#WildByDesign#SonetIsComing #ComingSoon

(Watch: Kia Sonet's clutchless gearbox could be the gamechanger)

The world premier of the Kia Sonet sub-compact SUV will take place on August 7. The Koreans are almost certain of Sonet's success because it fits right into the extremely lucrative - and extremely competitive, sub-compact SUV segment which currently has Maruti Suzuki Vitara Brezza and Hyundai Venue as the top players.

All eyes will now be on the pricing of Kia Sonet SUV. It will be interesting to see how competitive Sonet will be compared to some of its rivals like Brezza and Venue.