Hyundai Venue has introduced an intelligent Manual Transmission (iMT) unit in the Venue. This eliminates the need to press the clutch while still allowing drivers to retain control of slotting gears.Kia too has promised to bring clutchless transmission to Sonet.
By : HT Auto Desk
| Updated on: 04 Jul 2020, 10:06 AM 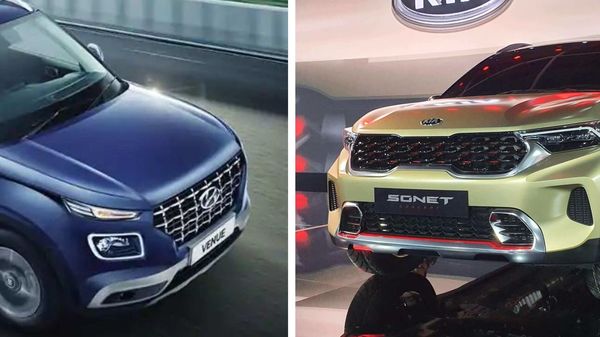 Hyundai Venue is expected to face stiff competition from Sonet once Kia does launch the car in India.

One of the biggest highlights in the upcoming Kia Sonet sub-compact SUV in India is the clutchless manual transmission unit that was touted to be the first in India. On Friday, Hyundai beat Kia to it by introducing the technology in Venue - a sign that while there may be a demand for it, the company is also gearing up to fend off the potential challenge that Sonet could pose.

Venue has been one of the most popular product from the Hyundai camp in India. With over one lakh units sold in a year since its launch in the country, it has found favour among buyers due to multiple reasons and despite stiff competition in its segment. This segment, though, is all set to get even more packed with new launches lines up in coming months, thanks to the Sonet from Kia and Nissan's upcoming offering.

Sonet was showcased in concept form at Auto Expo 2020 in February and received a positive response, according to the company. Speaking to HT Auto earlier, Manohar Bhat, Head - Marketing and Sales at Kia Motors India, had said that the launch schedule remains on track despite Covid-19-related challenges. He had also highlighted how segment-first features inside the Sonet is likely to propel its popularity after launch. The clutchless transmission was one of these features with Bhat promising the convenience of an auto unit along with the control and thrill of a manual box.

Hyundai may be Kia's parent company but there is clearly a close rivalry and there seems to be no intention of ceding ground to the newer player who has made quite a mark in the country thanks to the Seltos SUV, its debut product here. Seltos continues to give the immensely-popular Creta a very stiff competition and many predict the Sonet to do exactly the same to the Venue. Introducing an intelligent Manual Transmission (iMT) unit in the Venue, then, may well have been a move to ensure the vehicle does not appear shorthanded when the Sonet does launch. "iMT is a technology that accounts for pleasure of driving and also the convenience needed to ease the hectic burden of daily commutes," said SS Kim, MD and CEO, Hyundai Motor India.

The iMT technology, also referred to as a clutchless system, is a 2-pedal system that eliminates the need for drivers to constantly use the clutch pedal as in a conventional manual transmission while retaining control to slot gears manually. It seeks to play a balancing role between convenience and driver engagement and could prove to be a useful addition in cars on Indian roads which are notoriously infamous for traffic snarls.