Kia Seltos vs Hyundai Creta vs Nissan Kicks: Features on offer in base variants

Kia Seltos and Hyundai Creta offer a whole lot of features and recent updates have made both vehicles even more well-equipped right from the base variants.Nissan is also hoping the base variant of 2020 Kicks is able to draw people towards it.
By : HT Auto Desk
| Updated on: 02 Jun 2020, 02:01 PM 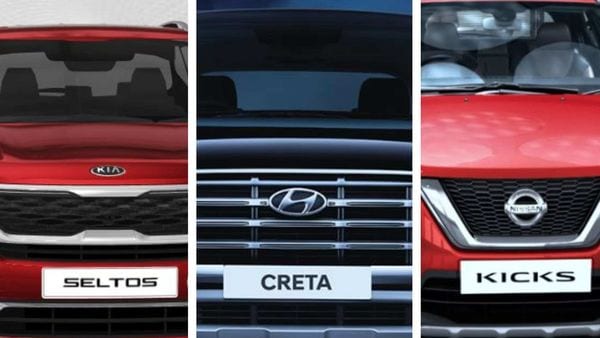 Seltos and Creta are the hot favourites in the compact SUV segment in India with Kicks looking at carving some space for itself here.

Kia on Monday announced an updated Seltos in the market which, among several highlights, brings certain features available in upper variants to some of the variants at the lower end. When the car was first launched as Kia's debut product in India back in August 2019, it already boasted of a mile-long list of features which made its the top-selling UV in the Indian market overtaking even the hugely successful Hyundai Creta and Maruti Vitara Brezza. By the turn of the year, rivals took a cue and upped their respective games in a bid to mount a challenge to the challenger. The 2020 Hyundai Creta was first showcased at Auto Expo in February before an official launch in March. Nissan also drove in the updated Kicks recently with a whole lot of upgrades and features straight from the base variant onwards.

As such, Seltos' updates are being widely seen as Kia's strong reply to Kicks and its own sibling Creta.

How does the updated Seltos stack up in terms of features against the new Creta and the new Kicks, especially in the lower variants. Here's a look:

When it comes to the starting price of these vehicles, Nissan manages to emerge as the most affordable with the 1.5 XL petrol variant positioned at ₹9.49 lakh*. Seltos' HTE is priced at ₹9.89 lakh* while Creta's EX variant is ₹10,000 more expensive at ₹9.99 lakh*. It is important to note here that the price of the base variant of Seltos has not been changed despite the recent update.

It is not surprising that siblings Seltos and Creta share several features in their respective base variants but how does Kicks' base variant compete?

Kicks XL packs in quite a lot of features even though it is the most affordable of the three cars here. The base variant of the vehicle gets auto AC, rear AC vents, cooled glove box with illumination, rear parking sensors, ABS, EBD, Breaking Assistance, front passenger airbags and a two-DIN audio system with Bluetooth connectivity, AUX and USB support. Some of the more noticeable misses in Kicks XL vis-a-vis base variants of Seltos and Creta, however, are projector headlights and steering-mounted audio controls. The former is available only with the Kicks' XV premium variant, while the latter is available with XV variant.

All three cars seek to pack in the basics and then some more in the base variants itself. And while a whole lot more goes into defining the success of a vehicle - looks, engine capabilities, service concerns etc, it is clear that Kia, Hyundai and Nissan are keeping each other in their respective crosshairs.

*All prices are ex showroom

Note: All features listed above are from company releases and for reference purpose only. Please check with individual OEMs for complete details.