While the 7-seat Hyundai Creta will share a similar exterior appearance as its 5-seat cousin, there will be a number of cosmetic/structural differences between both the models.
By : Prashant Singh
| Updated on: 02 Apr 2020, 01:13 PM 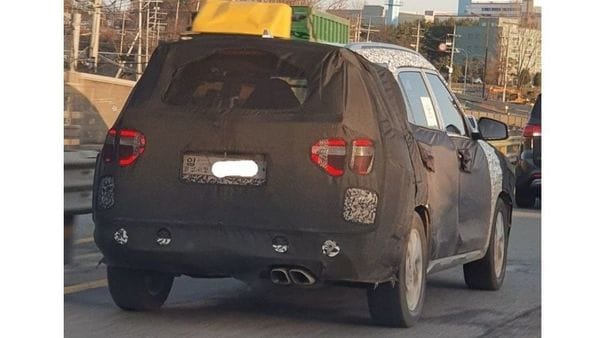 It is no news that Hyundai is working on a 7-seat version of the Creta. It was spied getting tested on public roads in Korea a few days back. Now, the SUV flaunts its rear three-quarters in a new spy image showing a slightly tweaked tail design.

While the 7-seat Hyundai Creta will share a similar exterior appearance as its 5-seat cousin, there will be a number of cosmetic differences between both the models. The 7-seat Creta will feature several structural updates including a completely new tailgate design, as visible in the spy image (above). It will have a more conventional looking rear-section and the back quarter glass seems to be mildly raked. The tail gate is more upright in order to make space for the third-row passengers. Moreover, another big update is the use of wider LED tail lamps which extend towards the tailgate, contributing to its wider look. It may or may not get the reflective strip in the centre as its 5-seater cousin.

Another structural difference will be the use of flatter roof and a bigger quarter glass. While these changes make this model look like a smaller Palisade SUV, these are utilitarian tweaks, introduced to make the SUV more convenient for 7 occupants.

In terms of dimensions, the 7-seat Creta will have a slightly longer length as hinted from its looks. While it may share the same wheelbase, its rear overhang will be stretched and it goes without saying why. For the record, the 2020 Creta spans 4,300 mm in length, 1,790 mm in width and 1,635 mm in height (roof rails). It has a 2,610 mm wheelbase.

In terms of engine options, the 7-seat version may get the same powertrain choices as the smaller Creta. Speaking of which, it may run on a 1.4-litre turbocharged and 1.5-litre naturally aspirated petrol options, along with a 1.5-litre diesel engine.

Expect the 7-seat Hyundai Creta to be launched in the Indian market after its international debut. It will be pitted against the likes of Tata Gravitas and the MG Hector Plus.