Home Auto Cars News In A Sea Of Supercars, Mclaren’s $358,000 Latest Is Value For The Money 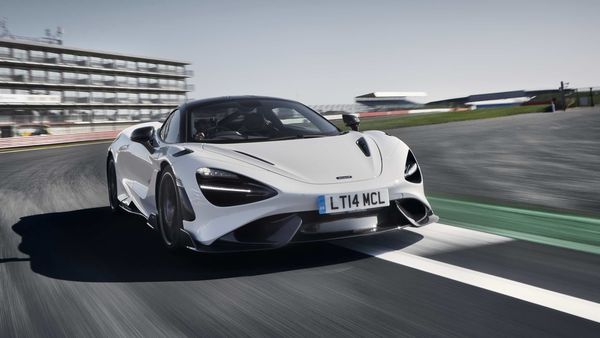 The $1 million Senna is a 789-horsepower sports car made to dominate the racetrack.

With a curb-weight of just 2,641 pounds and none of the creature comforts typically associated with a vehicle of that price, it’s also so bare-bones it has nauseated some automotive writers, as Motor Trend’s Jonny Lieberman noted in a series of increasingly green-faced Instagram posts last year. (To say nothing of its recall for fire risk.) Nonetheless, Senna represents the top of the line at McLaren, a status that is irresistible to the select car buyers with the means and iron stomach to acquire such a machine. The 500 models planned for production sold out almost immediately after the car’s debut in 2018.

Which brings me to the 2021 McLaren 765LT. At $358,000, 755-horsepower, and a whippet-thin 2,709 pounds, it presents all of the driving thrill of the Senna at a fraction of the cost, and no vomit bag needed. If you missed out on the Senna or want something slightly more suitable to highway driving on your way to the track, this new Longtail is worth considering.

McLaren has a history of producing so many cars so imperceptibly different in look and performance it befuddles consumers and critics alike. Few of us can note the differences between the 570S, 570GT, and 540C without painstaking examination. What’s more, the company itself has experienced shaky ground recently with habitual balance sheet and liquidity issues, according to a Sept. 1 report by Bloomberg Intelligence analyst Joel Levington, as well as the surprise sale of what had been its crown jewel, the laboratory-like corporate and research and development headquarters in Woking, England.

But the 765LT lends a grounding sense of identity and specificity to the brand. You can tell it’s special from your first glimpse of its dorsal fin and extensive mesh rear grill, its four centered tail pipes, and the new signature “Special" ($2,430) and “Elite" ($5,430) paint jobs in “Burton Blue" on the one I recently drove up California’s Route 2.

It’s noticeably longer (by 2.3 inches) and more svelte than its predecessor, the 720S, with a cacophony of unique carbon-fiber aerodynamic wonders on the front splitter, sides, and rear that provide ventilation and ease air flow. (Speaking of cacophony, McLaren has also engineered a new note on the car to amplify its low rumble throughout the cabin: “Every change in rpm is amplified, not only to occupants’ ears but also as a feeling through the seats," the press specifications say. Do not buy this car if you hate ostentation or if you suffer from tinnitus—it will only further agitate your agitation.)

The doors flip open like switchblades; a rear spoiler extends automatically to act as an air brake at high speeds. The car is extremely low—5mm lower in the front than the already stressfully low 720S—but an essential push-button lift kit to help prevent the front fender from scratching over speed bumps comes as a no-cost option.

With such aggressive and distinctive good looks, the 765LT manages to look like a car of its own standing, not another cookie-cutter McLaren. Better yet, with more sound insulation and a not-quite-as-bone-jarring chassis, it’s infinitely more drivable over longer periods of time, in real-world conditions, than the Senna ever will be.

The big emphasis for McLaren engineers when they designed the 765LT was losing weight, compared to the 720S, which I detected in the car’s hyper-nimble and lusty V8 engine and seven-speed dual-clutch transmission as soon as we launched up Angeles Crest. Some proof: It shifts and accelerates quicker than a 720S (some 15%, McLaren says) and has the fastest lap times at the Nardo Ring testing track (among others) of any McLaren Super Series model. Zero to 60mph takes 2.7 seconds; top speed is 205mph.

The car swooshes and cuts through canyon roads like a rapier: instantaneous, sharp, and demanding. Its carbon ceramic brakes and body harmonized into some perfectly balanced ballet as I rushed up and down California’s mountain roads, the downhill portions infinitely more technical than driving uphill. (Those brake discs and calipers, by the way, are the same as those in the Senna and are Formula 1-inspired, with caliper cooling ducts so integrated they make for sublime brake pedal feel and stopping power par excellence.)

The standard version of the 765LT is so scant that it comes sans radio (which saves three pounds), with feather-light racing seats (weighing just seven pounds) and a new exhaust system that saves eight pounds over the 720S. Along with additional weight savings in such things as wheels, redacted carpeting, and the lack of infotainment and climate control (you can opt for those at no cost), the car is 176 pounds lighter than the 720S. Which means, in short, that at just a few pounds heavier than the Senna, and with nearly equal power, the 765LT feels as exciting to drive as even McLaren’s current top dog—even if, on paper, it’s a shade slower.

Best yet, as I alluded to earlier, it offers more usability for daily driving—offering such things as the Rear View Camera and Parking Sensors that come standard on cars slated for the U.S. market. I recommend retaining the 8-inch infotainment screen and associated capabilities; you’ll want that little luxury to ease the drives out and back to the track, which I expect many 765LT drivers will take. I’d select the power adjusted steering column, power adjustable heated seats, and air conditioning as well. All are no-cost options.

This is a new tack for me. I’ve been hard on McLaren in the past because the craftsmanship, fit, and finish of their cars’ interiors fell far sub-par, compared to anything in the competitive set. McLarens have been known to drive owners crazy with plastic-y components and confusing, glitchy interior technologies. When it comes to craftsmanship and interior élan, the 765LT is still no Ferrari. It’s not even a Porsche. But it is a strong step forward. For the McLaren lover, the car presents an exceptional value for money.

Production of the 765LT coupe is restricted to 765 units, roughly 18% of the 4,100 cars the company is likely to sell globally in 2021. A third of those will be sent to the U.S. Not too many more will be made than the extraterrestrial Senna, all things considered—but if you hurry, you’ll have a fighting chance.