Hyundai Venue sub-compact SUV is one of the best-seller from the Korean carmaker in India, which is offered with manual, automatic as well as the iMT gearbox.
By : HT Auto Desk
| Updated on: 21 Dec 2021, 11:48 AM 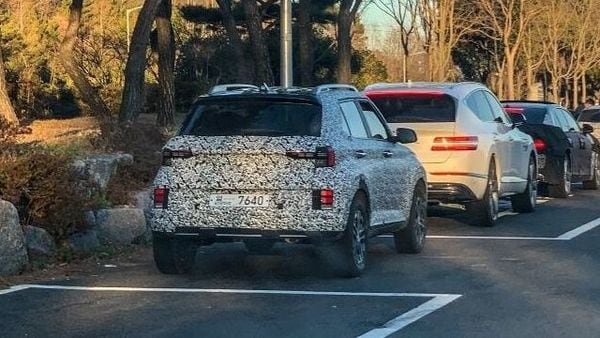 Hyundai is likely to bring in the facelift version of the Venue sub-compact SUV to India. The Venue facelift model was recently spotted testing in camouflage abroad. According to reports, Hyundai may also include the N-Line version of Venue when launching the facelift model some time next year in the country.

The spy shots, shared by Autospy, shows a completely revised rear section of the SUV, which include a newly designed tailgate, a new bumper, as well as redesigned taillights.

The chrome-plated twin exhaust pipes, as well as alloy wheels seen in the spy shots, hint that there could be also an N-Line version of the Venue soon. These characteristics are seen on the N-Line models from Hyundai. The Korean carmaker launched its first N-Line model in India last year when it drove in the i20.

The front face of the Venue facelift is also likely to come with a redesigned grille, a redesigned bumper as well as a new set of headlights. Expect changes inside the cabin of the new-generation Venue as well. According to reports, the cabin of the Venue sub-compact SUV is likely to get certain cosmetic changes with new interior colour theme, new materials for seats, a bigger touchscreen infotainment screen among others. In addition, the Venue facelift could also come with more features.

Hyundai Venue, which rivals the likes of Maruti Suzuki Vitara Brezza, Tata Nexon, Mahindra XUV300, Kia Sonet, Nissan Magnite among others, was first introduced in India in 2019. It received a facelift a year later with the introduction of the iMT gearbox along with the manual and automatic transmissions already available.

Hyundai is likely to continue with the same powertrain as is offered in current models. Venue comes powered with a 1.2-litre 4-cylinder naturally aspirated petrol engine that produces 82 hp of power and 115 Nm of peak torque. There is also a 1.0-litre 3-cylinder turbocharged GDI petrol engine that can produce maximum output of 118 hp and 172 Nm of torque. The engines come mated to transmissions with the option of a 6-speed manual gearbox, a 6-speed iMT clutchless gearbox or a 7-speed dual-clutch automatic transmission.