Hyundai Custo MPV will be based on the company’s N3 architecture and is expected to be available with a 1.5-litre naturally-aspirated four-cylinder engine.
By : HT Auto Desk
| Updated on: 28 Jul 2021, 09:25 AM Hyundai Motor has teased Custo MPV, its new minivan, ahead of launch in China.

Hyundai is all set to launch a new multi-purpose vehicle after it introduced the Staria MPV with futuristic looks earlier this year. The new MPV, called Custo, will be unveiled in coming days. Ahead of the official debut, Hyundai has shared a few images with the MPV in silhouette to give an idea about its size and design elements.

Hyundai Custo stands smaller than the Staria MPV that made debut in April this year. Custo MPV stands 4,950 mm in length, 1,850 mm in width and 1,734 mm tall.

In first glance, the design of the Hyundai Custo MPV appears to be inspired by the new generation Tucson SUV. This is especially noticeable from the front. The Custo MPV wears a very similar looking grille with integrated daytime running lights and slim LED headlights.

Contrary to more recent Hyundai's designs, the Custo MPV does not get as many side creases. However, the alignment of the door handles indicate it could be the same technology as seen in Kia Carnival MPV in which the door to the rear seats slide open.

Custo also gets LED lighting signature at the rear and is made up of fairly slender C-shaped design, linked by a horizontal bar.

There are no details of its interior yet, but it is possible to assume that it will have a configuration of six or seven seats in three rows of seats. 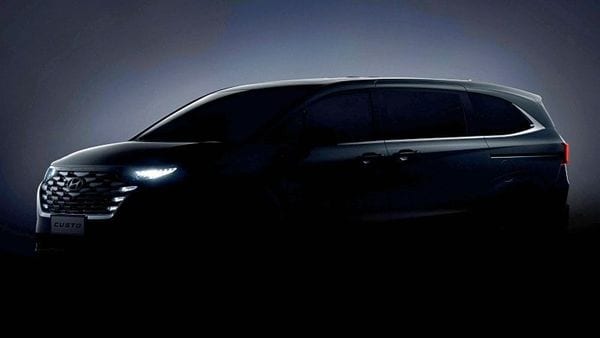 The design of the Hyundai Custo MPV appears to be inspired by the new generation Tucson SUV.

According to China's Ministry of Industry and Information Technology (MIIT), the Hyundai Custo will come powered with a 1.5-litre petrol engine with a maximum power of about 170 horsepower and a 2.0-litre engine with up to 236 hp of power. The Custo MPV is expected to be essentially a front-wheel drive to keep it more affordable.

Hyundai will launch Custo MPV exclusively for the Chinese markets as of now. It has not revealed any plans whether the vehicle will make it to other Asian countries any time soon.