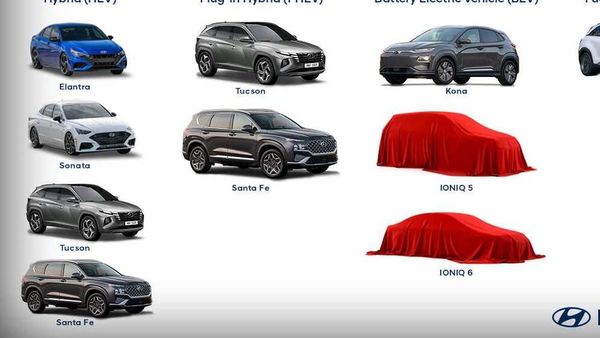 Hyundai Motor plans to expand its electrified, eco-focused vehicle lineup in the next two years. The Korean carmaker has announced that it will offer 10 new models by the end of 2022, which will include seven SUVs.

Most of the new vehicles Hyundai plans to launch in the next two years will be electric or hybrid versions of existing models as well as a few all-new models.

Besides the two Ioniq models, Hyundai plans to upgrade some of the existing models by adding hybrid and plug-in hybrid variants. Hyundai Elantra, which recently received upgrade with a performance N Line model, is set to add a hybrid model in the lineup. Among the other hybrid models are Hyundai Sonata, Hyundai Tucson and Hyundai Santa Fe. The new Hyundai Tucson and the Santa Fe lineup will also get a plug-in hybrid variant too.

Hyundai recently showcased the new Tucson SUV. The latest Tucson is expected to hit several international markets, including the US, in the early parts of 2021. The SUV gets a massive style upgrade on the outside and in the US, will be offered in SE, SEL, Blue Hybrid and Blue Plug-in Hybrid options. With an extremely sleek roofline, athletic fenders, prominent splash of character lines on the side, new front grille and a whole lot more, the 2022 Tucson seeks to stand not just away from the preceding model but even from its rivals.

Last month, Hyundai also revealed the new Santa Fe SUV. It has a slew of very significant updates to the exterior design elements while also promising a number of feature options on the inside. Much like the upcoming Tucson, Santa Fe seeks to break free from its preceding model in terms of its styling in a possible bid to re-ignite interest in models that have been in the market for some time now.

The only fuel cell vehicle planned by Hyundai is the NEXO, which is set for an upgrade by next year.