Hyundai Ioniq 5 EV, expected in India soon, gets official range of over 480 kms

Hyundai Ioniq 5 will nearly match the range of its technical cousin Kia EV6 which recently got EPA rating of nearly 500-kms range on single charge.Hyundai will launch as many as six electric cars in India in the next seven years, which is also likely to include the flagship EV Ioniq 5.
By : HT Auto Desk
| Updated on: 09 Dec 2021, 12:39 PM 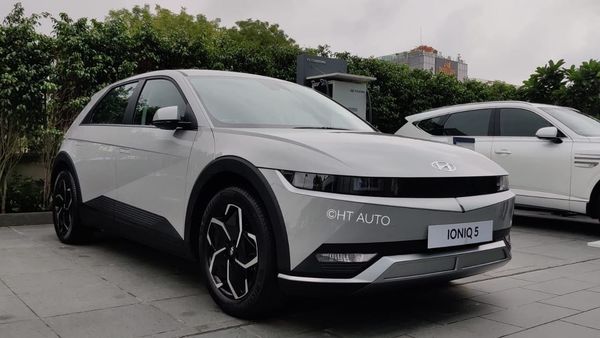 Hyundai’s flagship electric SUV Ioniq 5 has received an official range of more than 480 kms on single charge. The range has been officially rated by the Environmental Protection Agency, or the EPA, a US body that rates energy efficiency of electric cars. The EPA range now confirms that Ioniq 5 will nearly match that of its technical cousin Kia EV6 electric SUV.

EPA has rated that the Ioniq 5 has an estimated driving range of 303 miles (487 kms) on a single charge. The range is less for the all-wheel drive version of the Ioniq 5, with an estimated range of 256 miles (411 kms) without the need to recharge.

The EV range of the Hyundai Ioniq 5 is now officially better than other popular models like the Volkswagen ID.4 Pro, Audi RS e-Tron GT, Ford Mustang Mach-E among other long range electric cars available in the global markets.

Hyundai Ioniq 5 has already been unveiled for the global markets earlier. It is expected to go on sale by the end of this month. The electric SUV is part of Hyundai’s plan to introduce 23 all-electric cars in the next four years and sell a million EVs worldwide. Hyundai has also announced that it will launch as many as six electric cars in India in the next seven years, which is also likely to include the flagship EV Ioniq 5. The Korean carmaker had recently showcased the Ioniq 5 EV at its headquarter in Gurugram, and at the Auto Expo last year.

Ioniq 5 is available with a 77.4 kWh battery pack mated to either a single-motor or dual-motor setup. The top-of-the-line dual motor setup is an all-wheel drive (AWD) option producing a combined power output of 320 horsepower and 604 Nm of torque. It can go from 0 to 100 kmph in nearly five seconds and has a top speed of 185 kmph. The single-motor layout with a rear motor offers 225 horsepower and 359 Nm of torque.

Hyundai Ioniq 5’ can support both 400-V and 800-V charging infrastructures. The platform offers 800-V charging capability as standard, and it can accommodate 400-V charging without the need for additional components or adapters. With a 350-kW charger, Ioniq 5 can charge from 10 percent to 80 percent in just 18 minutes. The standard 10.9 kW on-board charger completes a full charge in 6 hours and 43 minutes using Level 2 charging.