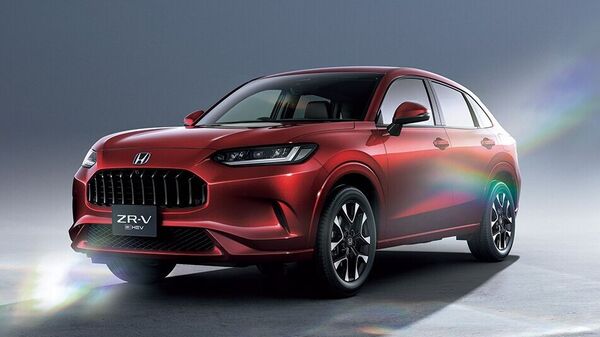 Honda has officially introduced the new ZR-V facelift, which is also known as H-RV in markets like United States.

Honda has officially introduced the new generation ZR-V compact SUV in Japan. The ZR-V facelift model comes with the same e:HEV hybrid powertrain that the Japanese carmaker has introduced in India for the first time in the Honda City e:HEV models. ZR-V is also know as the HR-V is some global markets, like the United States, and is one of the most popular models from the carmaker. Honda ZR-V is scheduled go on sale from next month.

In terms of design, the new Honda ZR-V appears smart and elegant with a sleek design character all around. It is reflected in the ZR-V's large yet smooth design from the front to the rear. The front face of the ZR-V showcases a vertical grille and horizontally long headlights for a sporty look. At the rear, the ZR-V appears wide with a thick bumper and a sleek roof line.

The interior of the SUV gets a touchscreen infotainment system and a digital instrument panel on a dual-tone dashboard. The overall design of the interior appears simplistic yet premium. The centre console separates the driver's seat and the passenger seat to create personal space.

Honda will offer the ZR-V with the choice of two powertrains. Besides the standard 1.5-litre turbocharged petrol version mated to a CVT gearbox, Honda will also offer the crossover with hybrid technology that is similar to what the City e:HEV gets in India. The hybrid model of the all-new ZR-V will be the first Honda SUV to be equipped with 2.0-litre direct injection engine that made its debut on the Civic e:HEV and the advanced 2-motor hybrid system (e-CVT). Honda claims the e:HEV tech will offer improved driving experience in cities highways as well as in hilly terrain.

Honda will offer the ZR-V with AWD options in both hybrid and petrol models. The real-time AWD promises improved performance on difficult terrain, such as snow.