Harrier to Nexon: Tata Motors offers benefits of up to ₹85,000 on select cars

Tata Motors has offered benefits on its SUVs like Harrier, Safari and Nexon, hatchbacks like Altroz and Tiago as well as the Tigor sedan in March.
By : HT Auto Desk
| Updated on: 07 Mar 2022, 10:01 AM 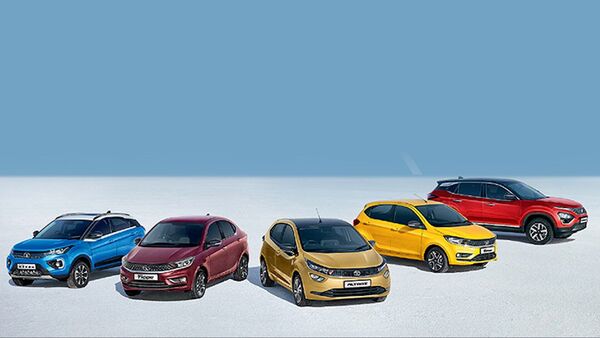 Tata Motors offers benefits of up to ₹85,000 on select models like Harrier, Nexon, Safari, Altroz, Tigor and Tiago in March.

Tata Motors has offered heavy discounts of select models till March 31. The benefits go up to as much as ₹85,000 depending on models and variants. The discounts are offered on Tata cars, which include SUVs like the Harrier, Safari and Nexon, hatchbacks like the Altroz and Tiago as well as the Tigor sub-compact sedan. The discounts will be applicable on select variants of these models till the end of this month. Tata Punch, the latest SUV from the carmaker's stable, has not been included in the list of beneficiaries.

The biggest beneficiary of this scheme is Tata's five-seater SUV Harrier. The SUV gets the maximum benefit of ₹85,000. Besides a corporate discount worth ₹25,000, the Harrier SUV models launched last year will get a benefit of ₹60,000, including a cash discount of ₹20,000. For the 2022 Harrier models, the exchange benefit has been reduced to only ₹40,000.

Tata Safari three-row SUV also gets heavy discounts this month with benefits worth up to ₹60,000. Tata is not offering any corporate discount on this model, unlike the Harrier. The 2021 models gets exchange bonus worth ₹60,000, while the newer 2022 models get exchange bonus of up to ₹40,000.

Tata Nexon SUV, which is the best-selling model from the carmaker and the highest-selling SUV in India for the last three months, also gets benefits worth ₹25,000. The diesel variant of the Nexon gets an exchange bonus of ₹15,000 for the 2021 models. There is also a corporate discount of up to ₹3,000 on the petrol variants of the SUV, which goes up to ₹5,000 on the diesel variants. Tata is not offering any discount on the Nexon EV models.

Besides the three SUVs, Tata is also offering heavy discounts on two of its popular hatchbacks - the Altroz and Tiago. The Tiago is offered with a cash discount of ₹10,000 for the 2021 models. There is also an exchange bonus worth ₹15,000 on these models, as well as ₹10,000 on the newer 2022 models. Tata is also offering a corporate discounts of up to ₹3,000. The CNG variants of the Tiago, which was introduced earlier, is not included in the offer. Tata Altroz premium hatchback also gets benefits of up to ₹10,000 for the turbo-petrol variants.

The 2021 models of Tata Tigor sub-compact sedan comes with cash benefit worth ₹10,000. They also get exchange bonus worth ₹15,000, which goes dow to ₹10,000 for the newer models. Besides these, there is also a corporate discount worth ₹3,000. Like Tiago, Tigor's CNG models too do not get these benefits.