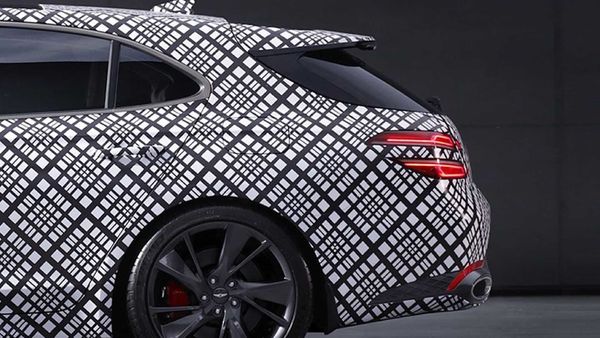 Hyundai-owned luxury car brand Genesis has teased its G70 wagon online, which appears to be a longer roof-equipped version of the G70 luxury sedan. Back in early 2020, when Genesis released an image showing the brand's future product lineup, there was a car that looked like a wagon. It was rumored to be the G70 wagon and now, the automaker has teased the car.

The teaser image showcased by Genesis in its Instagram profile doesn't show the entire car, but only the camouflaged rear profile, that too partially. However, despite the tight camouflage, the wagon shows off its rear profile design including the bisected LED taillights, roof spoiler, large oval-shaped exhaust tips, swooping rear glass area, etc.

As it appears, the car appears to be a typical wagon with a sloping hatch glass and a modest spoiler. If we look closely, the Genesis G70 wagon appears to have borrowed design inspiration from the refreshed G70 sedan.

However, unlike the sedan that gets the taillights off the trunk lid, the wagon comes with lighting elements extending onto the rear door as well. The rear bumper of the G70 wagon looks the same as the sedan.

Overall, the car is likely to get a shooting brake-style appearance. The Interior of the upcoming G70 wagon has not been revealed. But expect it to get a similar appearance as the sedan. It could boast a large 10.25-inch touchscreen infotainment system.

Not only design and features, but on the mechanical front too, both the sedan and wagon are expected to share similarities. The upcoming G70 wagon is likely to get the 2.5-litre engine that is capable of churning out 290 hp of power and 420 Nm of torque. There will be a twin-turbo 3.3-litre V6 engine as well, alongside a diesel motor.