Ford Everest is the new Endeavour. SUV teased ahead of global debut

Ford Motor will officially take the wraps off the new Everest SUV early next year. It will be launched in Australia and South East Asian markets. Ford claims the SUV has the versatility to handle mountains, tracks or city streets.
By : HT Auto Desk
| Updated on: 17 Dec 2021, 03:53 PM 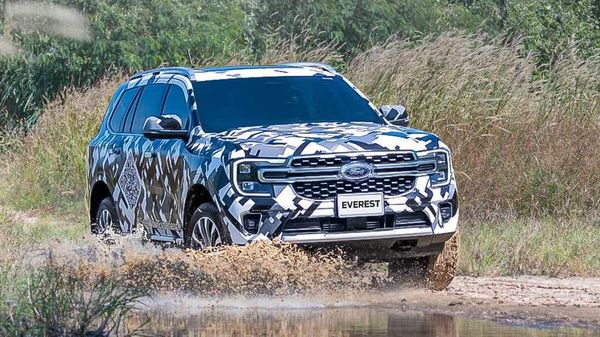 2022 Ford Everest is likely to be launched early next year.

Ford is all set to launch the new generation Everest SUV, which derives a lot of inspiration from the Endeavour SUV sold in India. Ahead of the global debut next year, the company has released the official teaser of the new Ford Everest in a video.

The next-generation Everest has entered the final testing phase of Ford's global program. It is expected to be launched in the South East Asin markets besides Australia. Ford may also bring the SUV to India as well through the CBU route since the carmaker has stopped making cars in the country.

Dressed in digital camouflage designed by Lee Imrie, designer at Ford Australia, some of Everest's key visual design clues will remain under wraps until revealed in the first quarter of 2022. But its similarities with the Endeavour is quite visible even under the wraps. According to Ford Motor, “The Next-Gen Ford Everest builds on its award-winning capability, and has the versatility to handle mountains, tracks or city streets."

The 2022 Everest comes with a muscular front design, C-shaped LED headlight, 3D grille and Ford logo in the middle. The side profile of the upcoming SUV is very similar to the current model. Also included are large alloy wheels, roof rails, a sidestep and upright pillars. As per the teaser video, the rear profile gets C-shaped LED tail lamps, roof-mounted spoiler, high-mounted brake lights and a large greenhouse.

The SUV is likely to be offered with two engine options - a 2.0-litre four-cylinder twin-turbo EcoBlue diesel unit and a new 3.0-litre V6 turbo diesel. The latter engine will generate 254 bhp power and 600 Nm torque. A 10-speed automatic transmission can be brought as standard in the SUV. While the India-spec model is likely to be offered with only the 2.0-litre engine.