On Wednesday, Lucid unveiled the production version of Air electric sedan, which the company claims is the fastest-charging EV ever with an estimated range of 517 miles.
By : Bloomberg
| Updated on: 10 Sep 2020, 07:55 AM 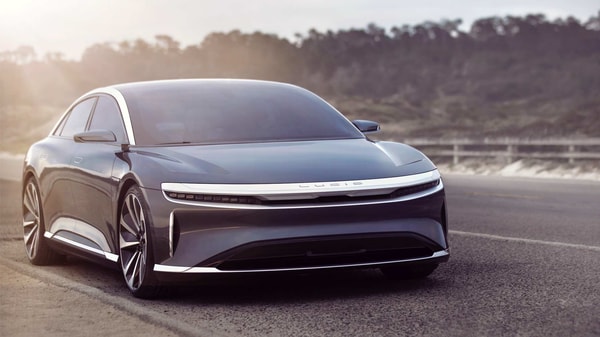 Lucid unveiled the production version of Air electric sedan with an estimated range of 517 miles.

Lucid Motors Inc., the electric-vehicle startup that has yet to build a production car, is following Tesla Inc.’s footsteps into the energy-storage business.The Newark, California-based company is developing home batteries -- similar to Tesla’s Powerwall -- and utility-scale devices, Chief Executive Officer Peter Rawlinson said in an interview. They will have the same battery-cell modules the company is installing in its debut EV.

“There is a multiplier effect: They are cost-effective to make," so they can be used in stationary storage systems, Rawlinson said.

His comments came ahead of the unveiling Wednesday of the production version of Lucid’s Air electric sedan, which the company says has an EPA estimated range of 517 miles and claims is the fastest-charging EV ever. The Air also will have two-way, vehicle-to-grid charging that allows owners to power their homes in the event of a blackout.

The energy-storage systems are an extension of the same technology but may require lower-performance cells than the cars, Rawlinson said. Lucid has an agreement with LG Chem Ltd. for the cells in its battery packs. The company aims to have a prototype of a commercial system installed at its headquarters by the start of next year that will store power generated from solar panels on the facility’s roof and provide electricity during peak hours.

Lucid is also in preliminary talks with Saudi Arabia’s Public Investment Fund about an industrial-scale energy-storage system, Rawlinson said. The goal is that Saudi Arabia could store solar-generated power in Lucid’s batteries, helping the country to shift from dependence on oil and diversify its economy. The fund -- which invested more than $1 billion in Lucid in 2018, giving it a much-needed injection of cash and credibility -- declined to comment when asked about any energy-storage discussions.

“It’s a natural place for us to help our investors and work with our investors," Rawlinson said.The company is often compared with Tesla, in part because Rawlinson was chief engineer on Tesla’s Model S between 2009 and 2012. But Lucid has catching up to do in both EVs and energy storage. Tesla has been offering storage products since 2015, when it introduced the Powerwall. It doesn’t report revenue data for batteries alone but recorded $1.5 billion in sales last year for batteries and solar arrays. By comparison, Tesla earned $20.8 billion in automobile revenue in 2019.

On Tuesday, CEO Elon Musk played down the role Rawlinson played in the Model S in a tweet, saying he didn’t contribute to the vehicle’s powertrain or battery.

The timing of Lucid’s move into energy storage is odd because the company has yet to start production on its EV, according to James Frith, a BloombergNEF analyst and head of energy storage. Lucid is aiming to begin assembly of the cars, and the battery packs that will power them, by year-end at a plant under construction in Casa Grande, Arizona. BloombergNEF forecasts that demand for energy storage could grow to a cumulative 1,095 gigawatts by 2040, driven by more than $650 billion of investment.“They presumably have their battery-pack line up and running ahead of full-scale production" of the Lucid Air, Frith said. “They can use this production line to generate revenue for the company, and the stationary storage market makes sense in this case as margins have traditionally been higher."