2021 Tesla Model S comes with a completely redesigned steering that looks like a yoke instead of a wheel.Tesla is working on progressive steering wheel, confirmed Elon Musk.
By : HT Auto Desk
| Updated on: 25 Jul 2021, 09:40 AM 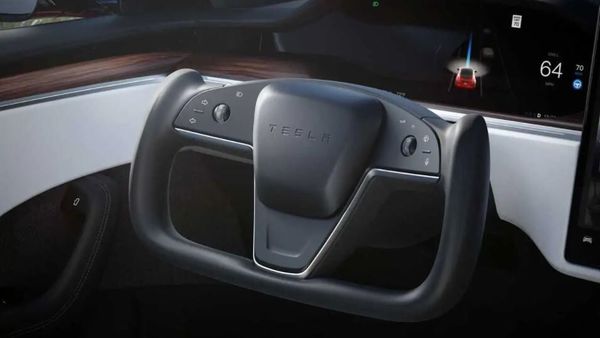 To yoke or not to yoke - this has been the question from many Tesla enthusiasts for the company. Tesla CEO Elon Musk has a one-word reply for them, confirming that the Ev manufacturer has chosen to yoke its future Model S cars. Not only the Tesla Model S, but the automaker is also possibly thinking to add the yoke in other future models as well.

A Tweeter user asked if there is any chance of a normal steering wheel option? Elon Musk replied to him with his single word "No." The yoke shaped steering wheel design has received mixed reactions from Tesla fans around the world. While some praised the new design for being unconventional and unique, some are against it.

There have been reports that Tesla at some point, considered at least offering a conventional steering wheel on the non-plaid version of Model S. The company however ditched the idea at a later stage.

The new Tesla Model S Plaid delivery was commenced last month. A highlight of the electric sedan is the yoke steering wheel with a 14.0:1 steering ratio. The design might be very unique but proving to be impractical at lower speeds for many.

According to some Tesla Model S owners, all the controls on the yoke are now touch-sensitive and at some point, they are hard to adjust to. The steering wheel really appears futuristic compared to the old conventional steering wheel.

Meanwhile, Tesla CEO Elon Musk has already confirmed that the electric car manufacturer is working on progressive steering. But it would years to roll out for the public.