Audi RS Q8 has a multiple personality syndrome - it is a large SUV but also fast enough to be a sports car. Fortunately, it isn't a disorder because the flagship Audi shines on both fronts.
By : Shubhodeep Chakravarty
| Updated on: 14 Nov 2020, 09:55 AM 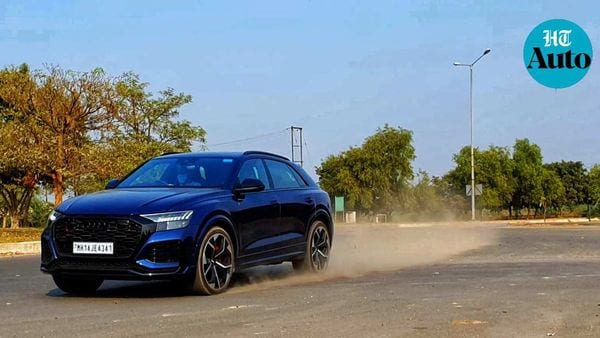 Audi RS Q8 is slightly faster than a Porsche Cayenne Turbo and only marginally short of figures achieved by Lamborghini Urus in a 0-100kmph sprint. (HT Auto/Sabyasachi Dasgupta)

Brawn and brains. Style and strength. Power and panache - I can keep hurling adjectives from the dictionary to describe the Audi RS Q8 and yet, a simple 'wow' could also describe that feeling of getting into one of the world's most powerful SUVs, turning on the ignition, switching on the RS mode, turning traction control off, slotting the gear to 'Drive' and taking off!

This is, honest to god, the closest I have come to knowing what a fighter pilot feels like when taking off from an aircraft carrier. Because the Audi RS Q8 is a speed monster with a thunderous roar and ability to take off from standstill. Not only is it the fastest Audi SUV ever made but it is right up there in the list of fastest SUVs in the whole wide world. And that it is here in India is a big thumbs up from the company for fans of performance vehicles here, a delicious reward of sorts for those who have an addiction for speed and a wallet to back it up with.

At ₹2.08 crore (ex showroom), the RS Q8 is clearly for the niche among the niche performance buyers. Up against the Lamborghini Urus though, it is almost a crore cheaper and still shines bright as an SUV that thinks it is a sports car. 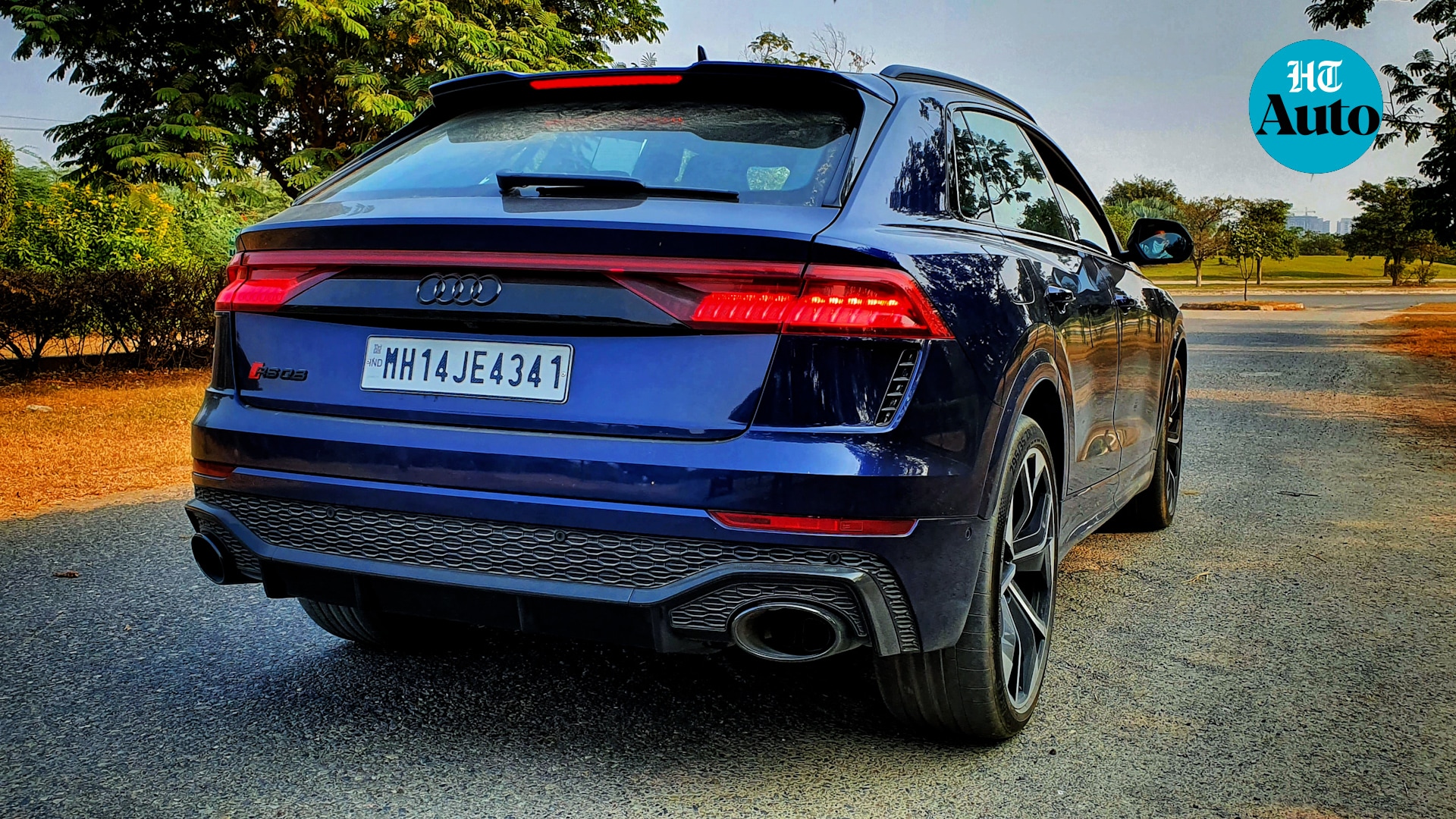 With 600 hp of raw power and mammoth 800 Nm of torque being fired from the 4.0-litre twin-turbo petrol engine, the RS Q8 deserves the crown for being a performance SUV. Its younger twin sibling - the Q8 - has a 3.0-litre TFSI engine which offers 340 hp of power and 500 Nm of torque. And while I had previously swooned over how the acceleration on the Q8 was quick yet confident, the RS Q8 plays the same game with its own set of rules.

While the Q8 fires from 0 to 100 kmph in 5.9 seconds, the RS Q8 claims to hit the same mark in 3.8. And while this isn't a faceoff between the twins, the RS is clearly the more gifted of the two and this is instantaneously more evident from the word go. 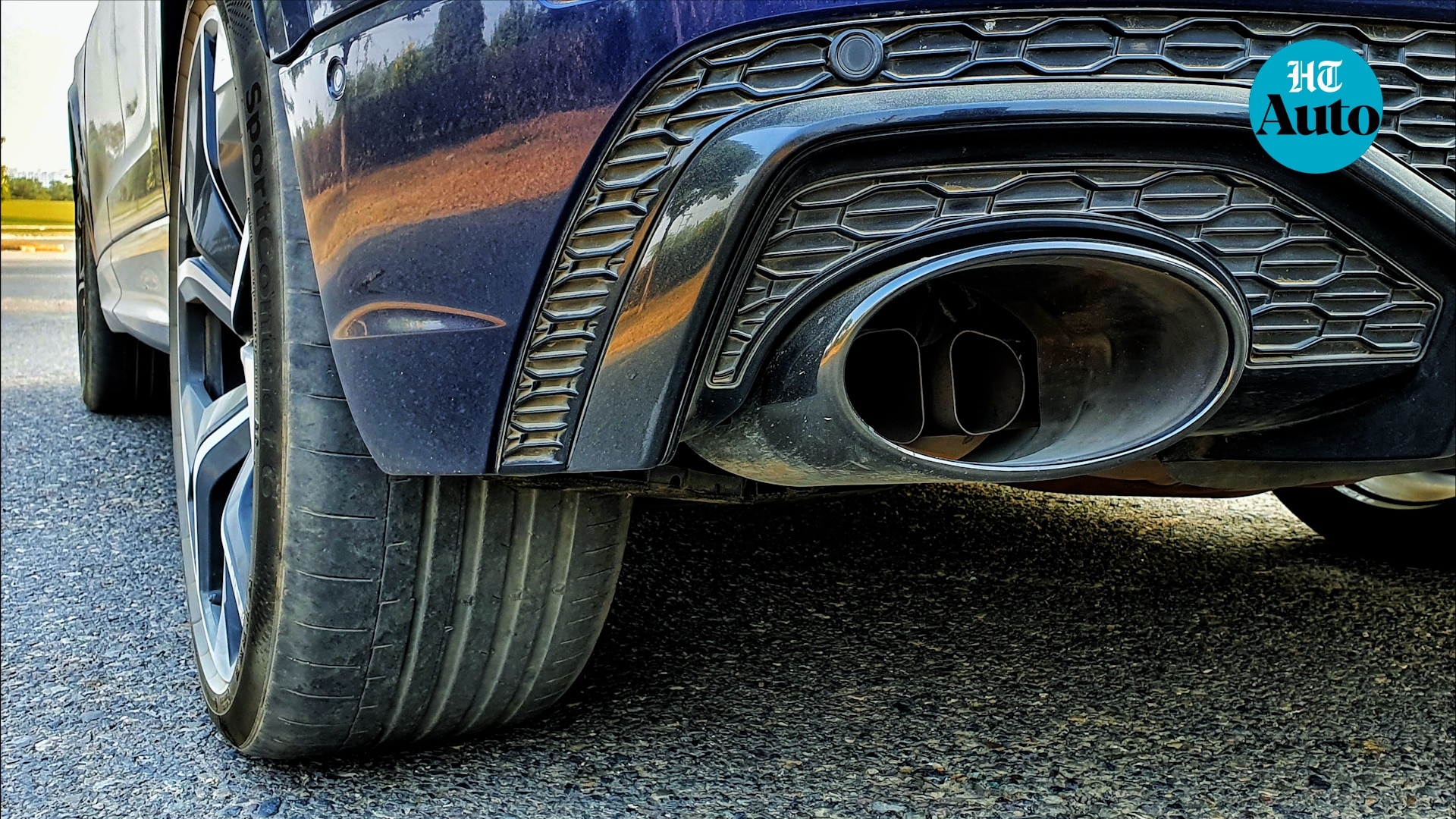 While no photo may do justice to the massive roar the Audi RS Q8 makes, it is important to note that it is quite thunderous. (HT Auto/Sabyasachi Dasgupta)

The massive power in a car as massive as this - remember, here is a nearly 2.5 tonne beast - is impressive but what is even more impressive is that the RS Q8 is not just claiming to thrill but is actually thrilling. That feeling of putting the pedal to the metal on a straight stretch of road was every bit as exhilarating as that Hulk coaster ride in Florida that I was brave enough to get on before Covid-19 struck down all travel plans.

Indeed, pushing the car to perform to what it claims to do best is like a bullet fire. Don't, for one instance, be fooled by the large SUV proportions because here is a trebuchet that is built for the speed offensive. That its top speed is limited to 250 kmph - 300 kmph is optional, is not just a statistic because given a controlled track and a qualified driver behind the wheels, the RS Q8 does have the absolute capabilities of touching its max potential. Keeping the road rules of where I was at into consideration - as always, I chose to quieten the car down after hitting the legal limit of 110 kmph. Those couple of sprint sessions though, aren't something I am going to forget in a complimentary rush.

All of the 600 hp of sheer power and that exhilarating torque figure are indeed the crowns on the RS' proverbial head but the jewels are surely the characteristics this car has when not being rushed as if its the last drive on Earth. Yes, this beast has a heart and it is one that may make it a delightful daily drive option too. This is because the RS Q8 handles itself just so well that you could mistake it for a docile SUV out for a ride in the sunshine. It keeps to its straights with purpose, takes corners with precision and the suspension is done just right to give a sense of comfortable luxury to occupants.

The sports seats also go a long way in ensuring whether you are racing against the wind or cruising past time, you stay plonked and planted. 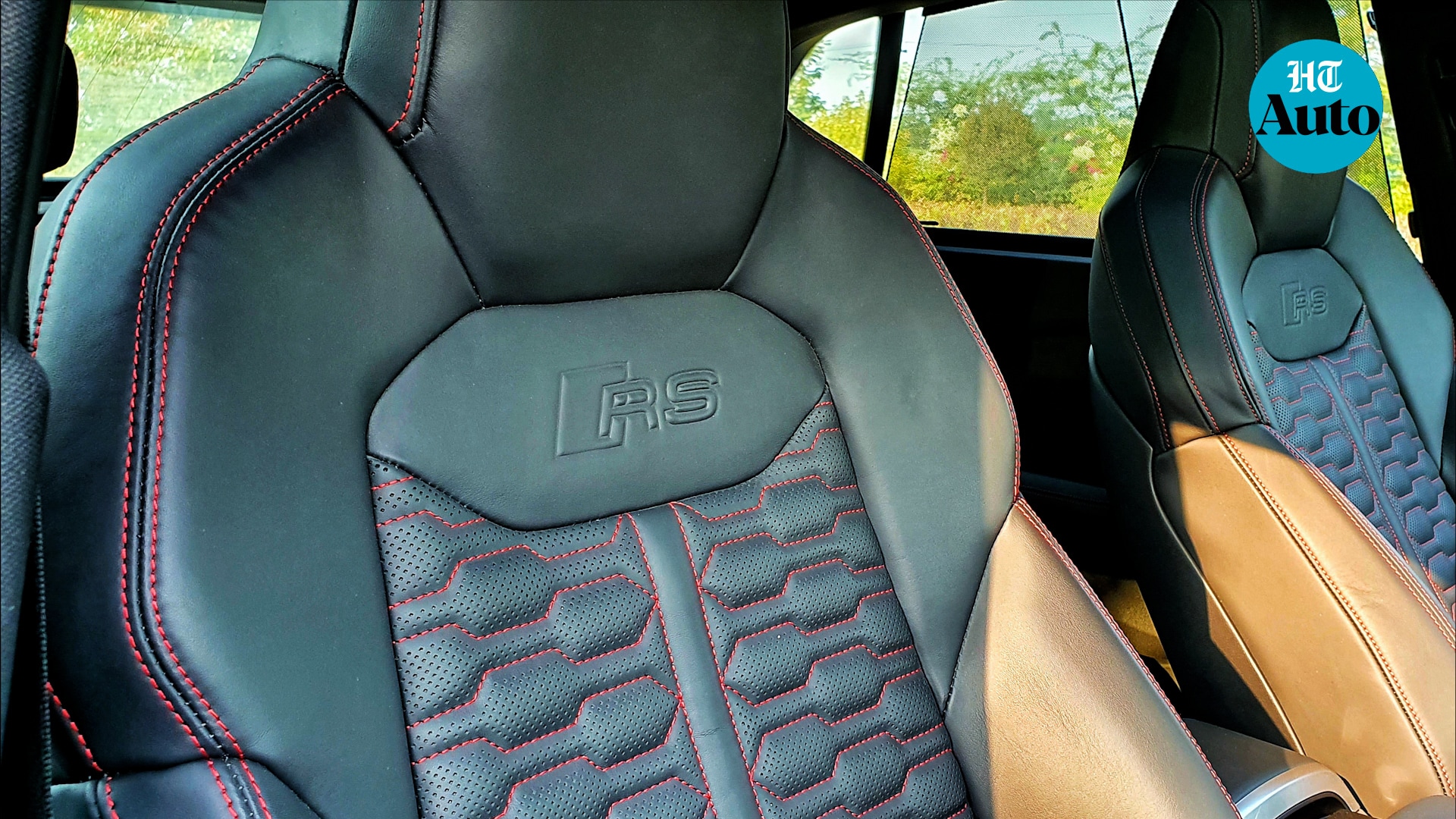 The sports seats inside this Audi RS Q8 adds to the racing charm of the Audi RS Q8. (HT Auto/Sabyasachi Dasgupta)

The steering also has its own varying hues and can be exciting or reassuring, or both, depending on what you expect the SUV to do for you. There is a sense of slight understeer when taking corners at speeds but the onboard computers clearly jump in at lightening speed and the active-roll stabilisation system ensures the RS Q8 grips the road like its addicted to it. No doubting the grip on offer, whatsoever.

This is also ably helped by the gigantic 23-inch wheels that my review unit had that give the Audi performance SUV even more character and flavour. And pay a little closer attention to the massive brake calipers and it is evident that bringing down all of the acceleration and momentum almost instantly is effective too. Phew, a relief I say.

And because it is, afterall, an SUV, the RSQ8 is able to blunt any challenge from speed breakers that conventional sports cars would struggle to go past. 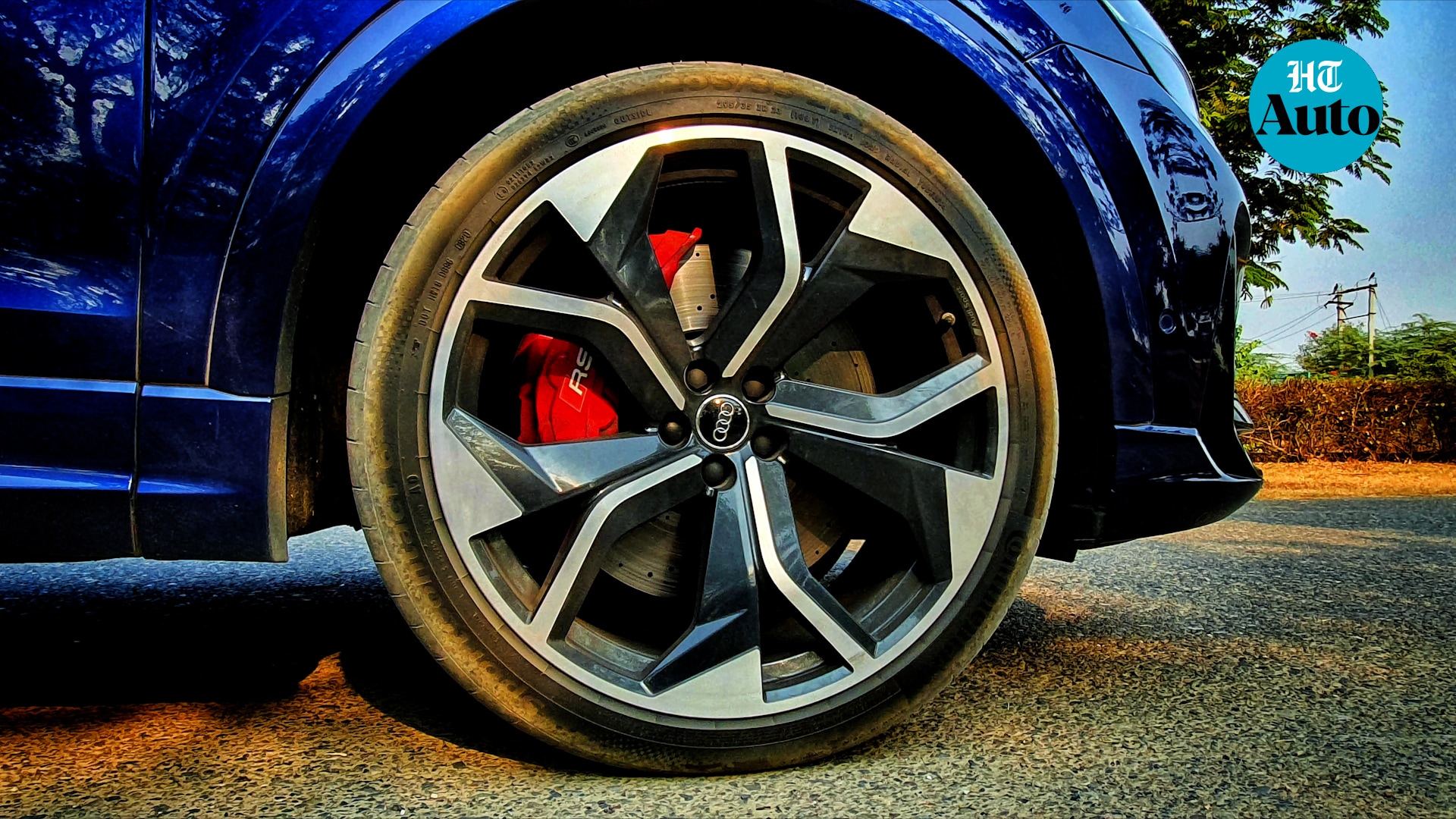 Audi RS Q8 is offered in 21 and 22 inche wheel sizes, as well as these enormous 23-inch wheel too. (HT Auto/Sabyasachi Dasgupta) The visual elements to set the Audi RS Q8 apart from the Q8 are subtle but sporty with blackened four-ring logo, blackened casing around the grille and more. (HT Auto/Sabyasachi Dasgupta)

The Q8 is one of the most stylish-looking SUVs around and its coupe-ish profile gives it that track superstar appeal. The same visual element actually does full justice to the RS Q8 which, to be honest, is the real track-star after all. The massive blacked-out front grille with the RS badge, the black outlay around it, the sharp LED matrix headlight with patterned illumination, the frameless-windows - all of these blend together to make the RS Q8 really, really striking to look at. The most capable SUV from the Audi family isn't trying hard to impress, it just does.

As such, while some of its very few direct rivals often dress up to back up their claims of being a performer, the RS Q8 sticks to being an impressively-designed product minus the visual shenanigans.

It is quite the same inside the RS Q8 too with the cabin exuding class and sophistication while adding more than a generous dash of sportiness. The twin-touch infotainment screen, the Virtual Cockpit digital dials, the red stitching - every aspect and element is not just well appointed but well done.

On the flipside though, the touch-enabled controls, screens and the piano black finish on the dash and center console does attract a whole lot of finger prints and you would be best advised to either wear gloves or carry a microfiber on you at all times. 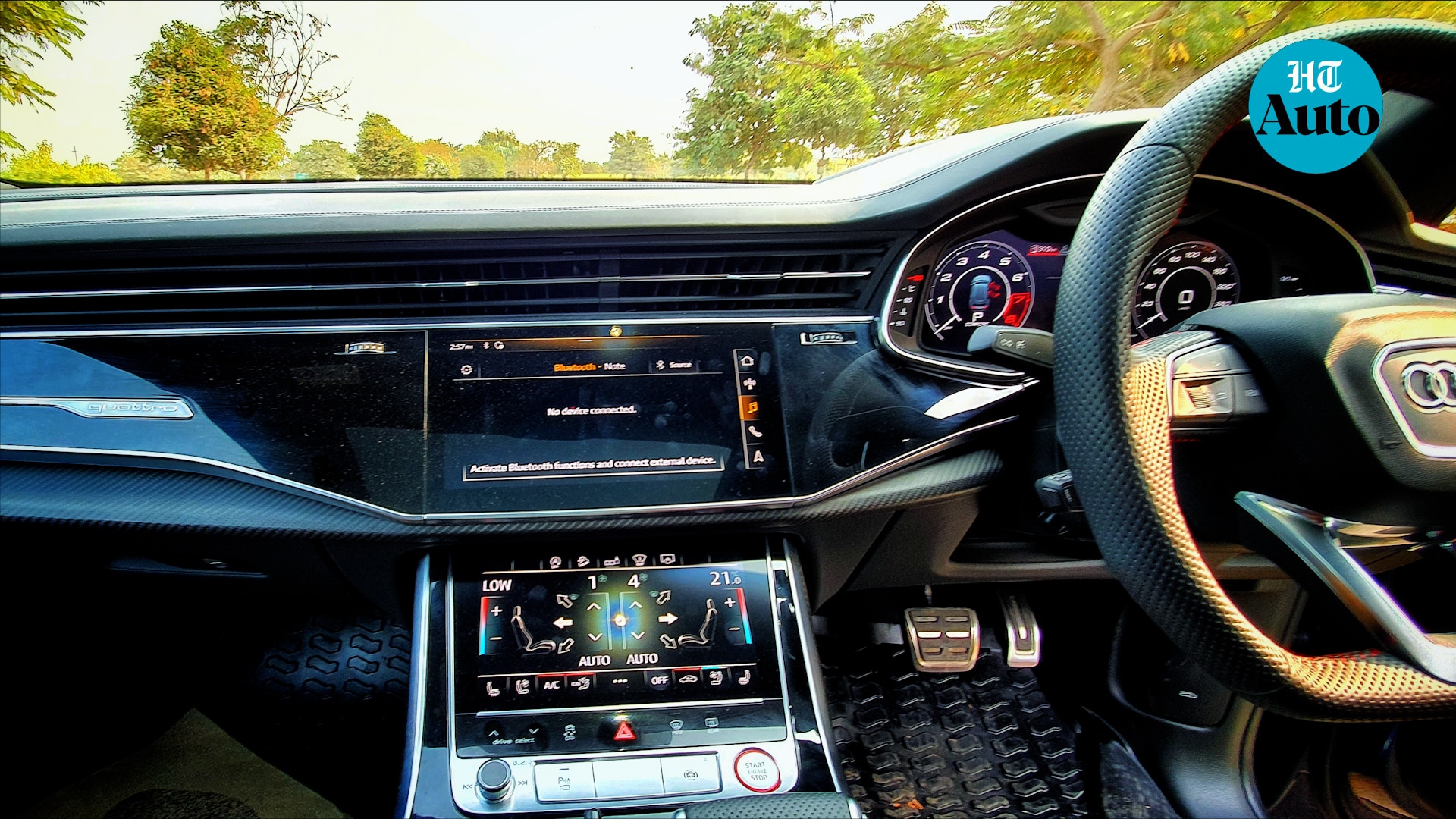 The cabin of the Audi RS Q8 is plush and premium, and gets a host of features even if the center console is a fingerprint magnet of sorts. (HT Auto/Sabyasachi Dasgupta)

Speaking of carrying things inside the RS Q8, that's one more aspect where a little more attention could have been given. Storage spaces are rather limited, almost as if the good folks at Audi didn't really think the driver would bother carrying anything apart from his thrill for speed. Yes, the SUV has massive boot space at over 600 litres. Yes there is a whole lot of space for passengers but a little more ingenuity when it comes to storing knick-knacks would have been good. What, most certainly, would have been even better is some form of rear-seat entertainment.

This is something I pointed out in the review for the Q8 as well. After all, it just doesn't seem fair that while the driver is getting the thrills from the drive, the other occupants don't really have much to do except hang on. Rear seat screens, therefore, are sorely missed.

Let's be honest. If I wasn't an automobile journalist, I don't think I would have spent as much time - or any at all - inside an RS Q8. It isn't meant for the masses and it won't notch up massive sales figures. But Audi obviously isn't expecting it to either. 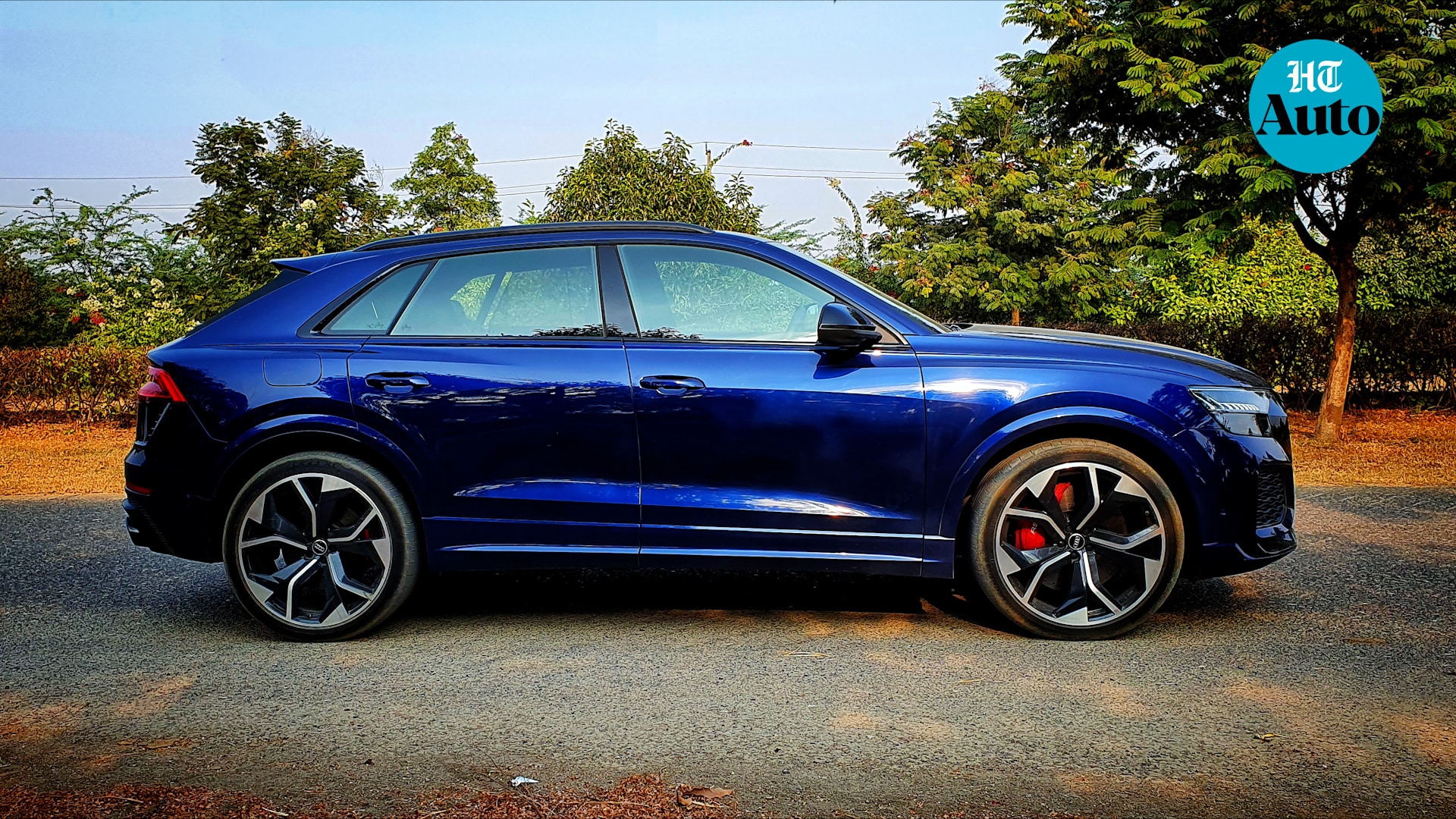 Audi RS Q8 is a power-packed performer which has the capabilities of a sports car minus their inabilities to tackle bad roads. A high ground clearance means it may be well suited to Indian road conditions. (HT Auto/Sabyasachi Dasgupta)

At around ₹2.10 crore (ex showroom), here is an SUV that performs like a sports car and delivers speed thrills which would satiate the ravenous appetite of even the most ardent adrenaline junkie. And there may be things money can't buy but the Audi RS Q8 isn't on that list. It does come with a substantial price tag, one that is significantly more than even the Q8 but - and smartly enough - undercuts the Lamborghini Urus by nearly a crore. There is very little reason then that if someone has the budget and the passion for a performance-oriented SUV, the RS Q8 may just be the best of the best in the garage.