Home Auto Reviews Discovery Sport 2020 Drive Review: At Home In City, Out And About Beyond

Discovery Sport 2020 drive review: At home in city, out and about beyond

Discovery Sport 2020 facelift gets several updates in a bid to renew its rivalry against some very capable opponents.A three-row set up, a premium cabin and off-road capabilities are some of the highlights of the new Discovery Sport.
By : Shubhodeep Chakravarty
| Updated on: 30 Dec 2020, 06:36 PM 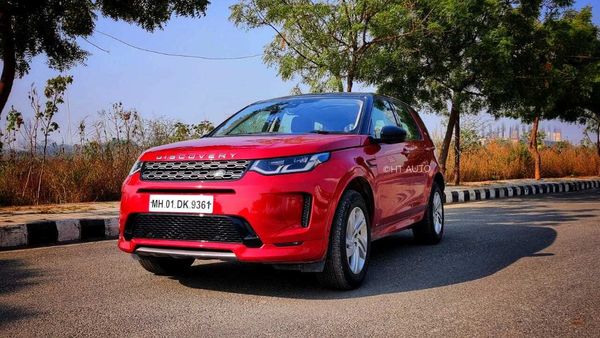 Land Rover Discovery Sport 2020 is the kind of SUV you would want if you are stuck in cities with a spirit to break free. Here is a vehicle that has always claimed to be a solid option as a daily drive car but one that also has some impressive off-road capabilities for those inclined towards taking the beaten path on occasions. And while the updated Discovery Sport launched earlier this year may be a facelift rather than a full-fledged update, the changes are both noticeable and noteworthy.

We finally got a chance to park ourselves inside the 2020 Discovery Sport to figure if it enhances its inherent strengths or are the updates mostly superficial.

Give it its own credit

Discovery Sport has often been compared to some of its siblings and for good reason. But the 2020 Discovery Sport seeks to also make a mark of its own in the looks department and assume a larger, more taller profile. Quite obviously, it isn't because the proportions have changed but because visual cues have been enhanced. Of note then are the reworked headlights which are significantly sharper than before, an updated grille and a cleaner front bumper which houses the fog lamps and air vents. 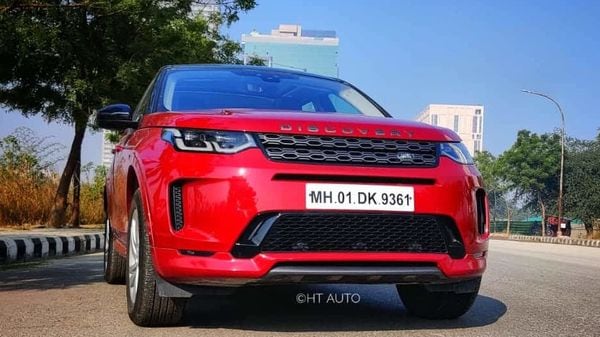 2020 Discovery Sport seeks to also make a mark of its own in the looks department. (HT Auto/Sabyasachi Dasgupta)

It continues to have a decent ground clearance and maintains its compact rear proportions, highlighted smartly by the typically large 'Discovery' badge and the LED tail lights. 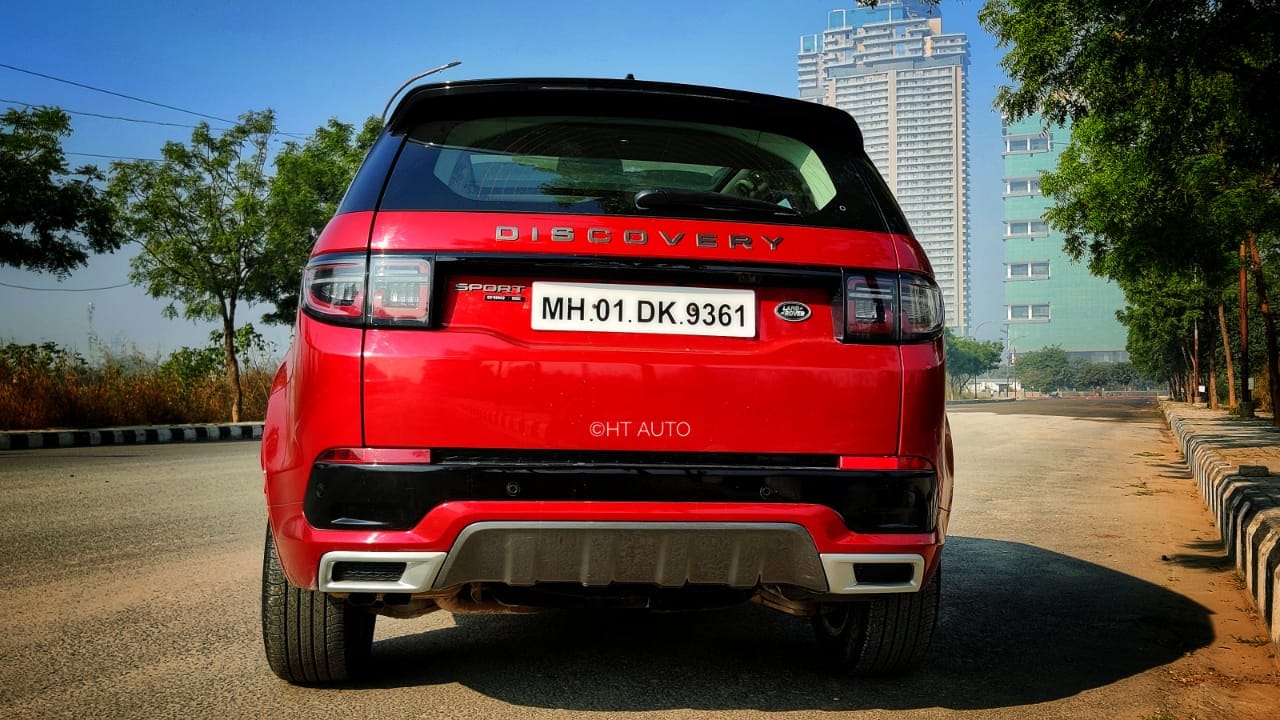 Discovery Sport may be just about 4600 mm in length but it does manage to offer a third row even if space here is absolutely bare minimum. This gets us to the cabin of the SUV itself.

The cabin of the Discovery Sport somehow manages to appear premium without trying too hard. In fact, that is a standout feature that I observe in almost every Discovery vehicle. And it's great.

The new Discovery Sport continues to offer soft-touch materials all around the cabin for that upmarket feel but the real update of note is the large 10-inch infotainment screen, packed nicely under the AC vents to avoid much glare and reflection. It is easy to operate and is responsive while putting out stats and information. 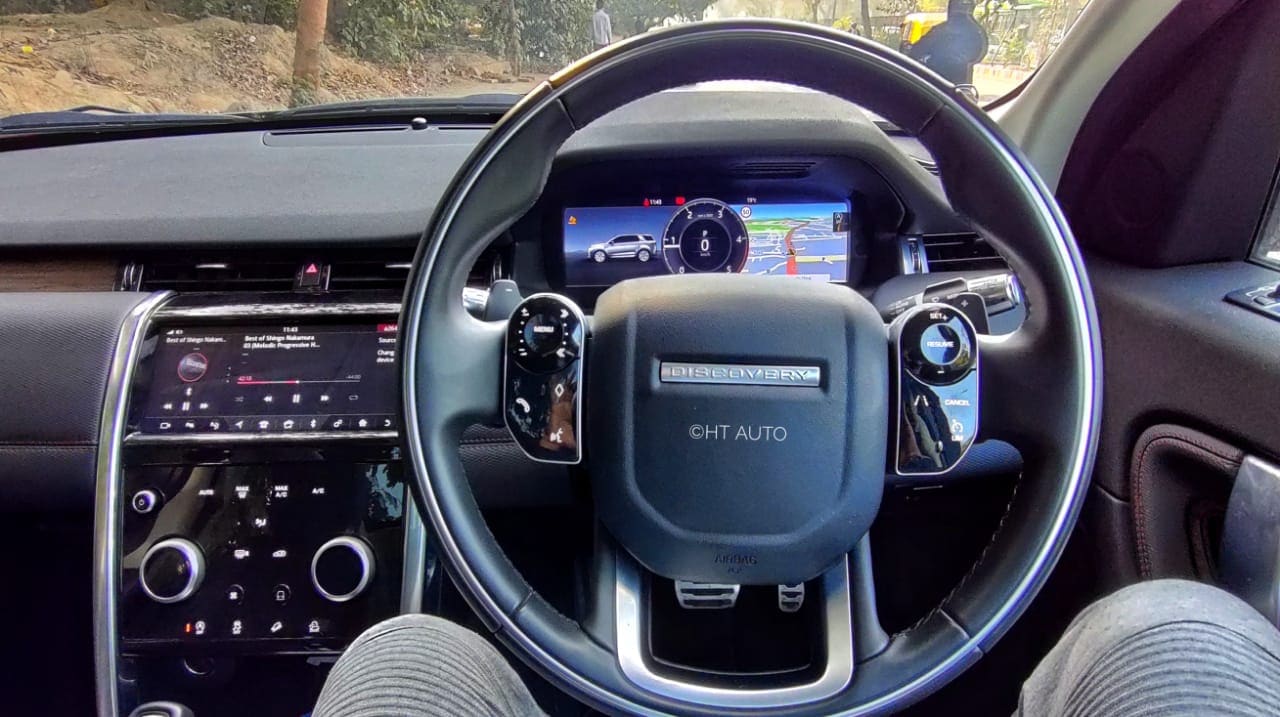 The large 10-inch infotainment screen has been packed nicely under the AC vents to avoid much glare and reflection. (HT Auto/Sabyasachi Dasgupta)

Under the screen are the two dials for AC control and for selecting terrain modes but the familiar gear selector dial has been done away with for a gear lever. Personally, I feel there was just no need to make this barter because the dial worked just fine, better perhaps than the lever. But more grumble about the gear when we do get to the drive part of this review. 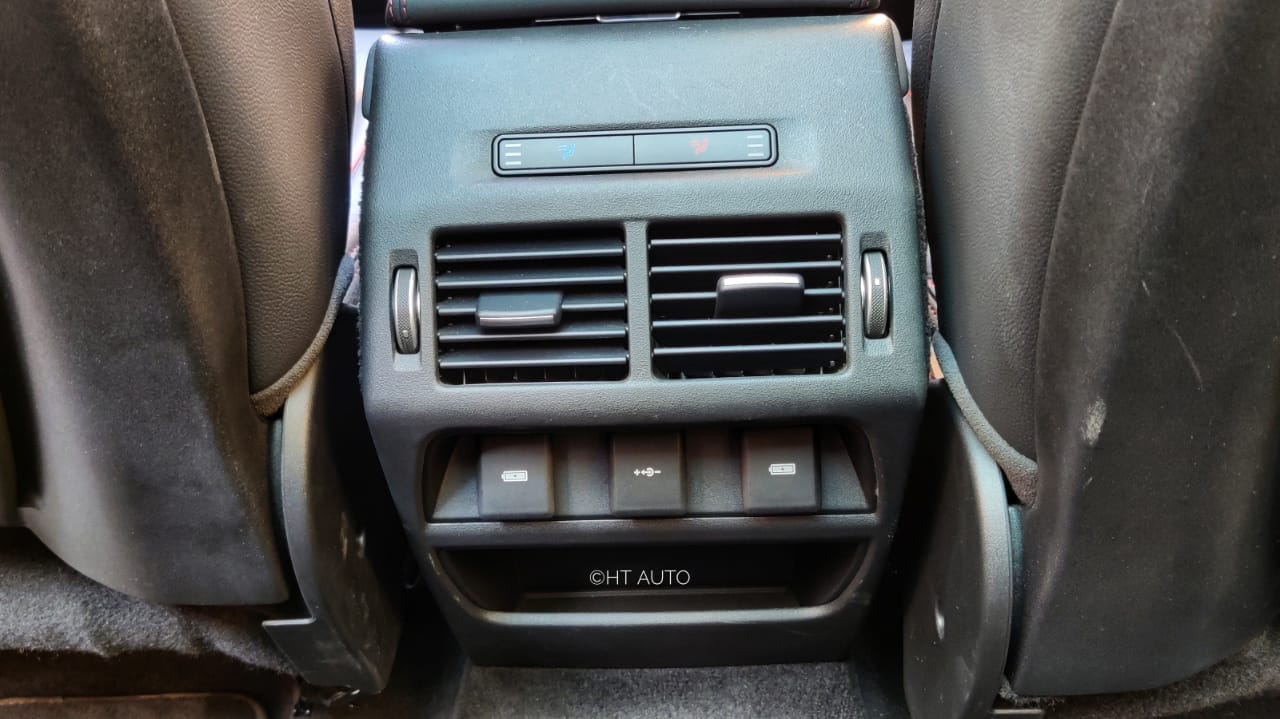 The middle-row passengers get the rear AC controls and a long list of 12v and USB charge points. (HT Auto/Sabyasachi Dasgupta)

There is nothing to grumble about though when it comes to the sheer seating experience inside the Discovery Sport. The level of cushioning, the stitching and the back support is top notch, ensuring that long journeys on at least the front two rows are going to be a relaxed affair. The front seats can be electronically controlled for customized position and support while there is generous amounts of under-thigh support, kneeroom, legroom and shoulder room in the middle row. What also helps the middle-row passengers are the rear AC controls and a long list of 12v and USB charge points - five is what I could count.

There is also a whole lot of storage space - on the doors, under the front armrest - which also has a space for wirelessly charging phones, and in the dashboard.

I kept the third row folded for most parts because while it is always good to have the option of additional seats, the last row is just too cramped to deserve any further details. 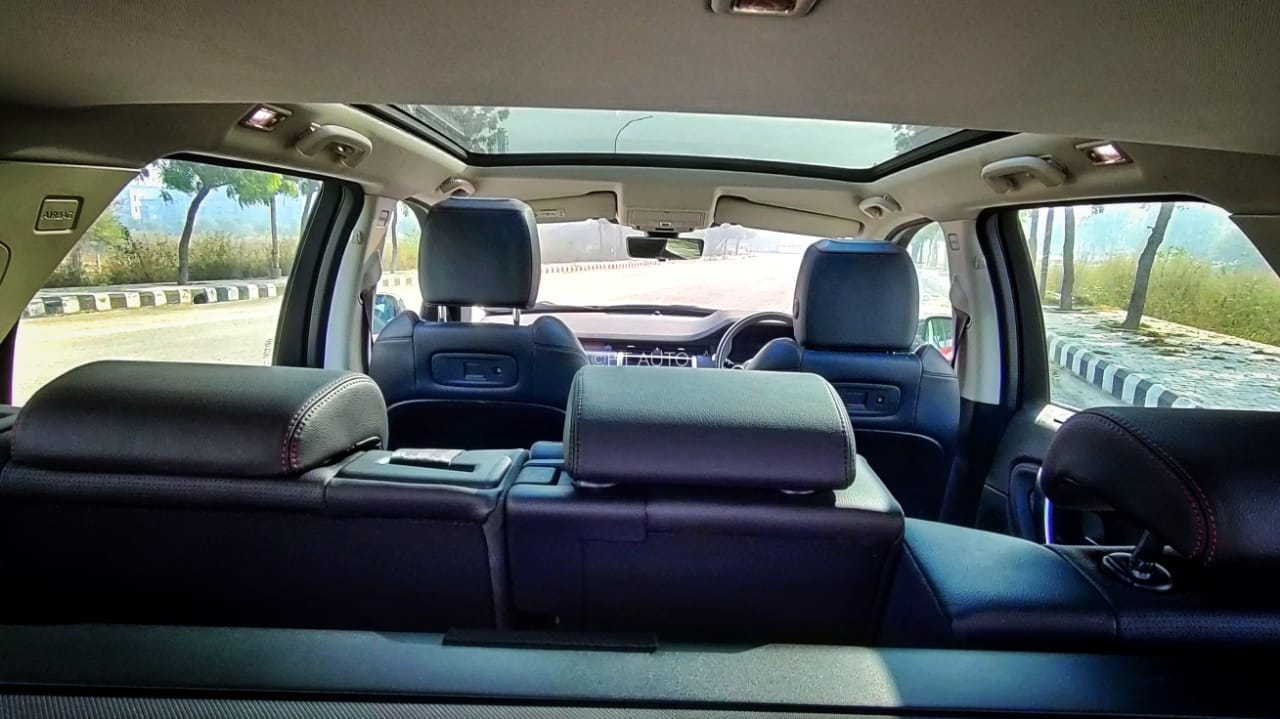 The 2020 Discovery Sport gets a one-touch panoramic sunroof that is fixed. (HT Auto/Sabyasachi Dasgupta)

Then there is a mammoth one-touch panoramic sunroof which complements the large windows all around to make the cabin of the Discovery Sport truly come alive to back in natural light. And while the sunroof is fixed and it may be a put off for a few, I personally think it is for the best considering how many like to bob heads out of roofs in violation of safety standards.

The Meridian 380W 11-speaker audio system also deserves a very special mention here because of its crisp and rich notes. There is a sub-woofer to pack more punch and while I don't claim to be an audiophile, those who do are also likely to appreciate what's on offer. The 2020 Discovery Sport churns out around 180 hp of power and has 430 Nm of torque. (HT Auto/Sabyasachi Dasgupta)

As its name suggests, Discovery Sport is best experienced when out and about - whether within city limits or beyond. The 2.0-litre turbocharged diesel engine churns out around 180 hp of power and has 430 Nm of torque. That's great for a leisurely drive but also good if and when there is a need to get a move on.

The D mode ought to mostly suffice, helping the large and over 2 tonne vehicle amble along nicely. And while the diesel engine does have a general grunt about it, it isn't too disconcerting unless the throttle is slammed in. It is the nine-speed automatic gearbox though that tends to miss its mark when the SUV is being pushed around. There is a split-second hesitation on when best to upshift which, even in S Mode, is evident. The suspension set up on the updated Discovery Sport allows it to swallow almost any road deficiencies with absolute ease. (HT Auto/Sabyasachi Dasgupta)

The Discovery Sport truly rewards you though when it is in its comfort zone - build speeds up to the triple-digit mark and this here is a composed, comfortable and classic performer. The rigid chassis is just so capable to allow the vehicle to offer a refined ride while the suspension set up allows it to swallow almost any road deficiencies with absolute ease. A really well-balanced steering only adds to the refined overall experience. Body roll is at a minimum - a bit when throwing the car into sharp turns - while the large tyres grip the road like the embrace of long-lost lovers. And all of that can be safely put aside for a new revelation when taking the Discovery Sport to roads less taken.

The Terrain Response System works effortlessly over the sand and mud tracks to provide ample control and grip. It is unlikely that the Discovery Sport is going to find itself in a sticky spot too often and while it may not be a Defender, this SUV appears content to offer the option to its owners for the occasional wild ride. 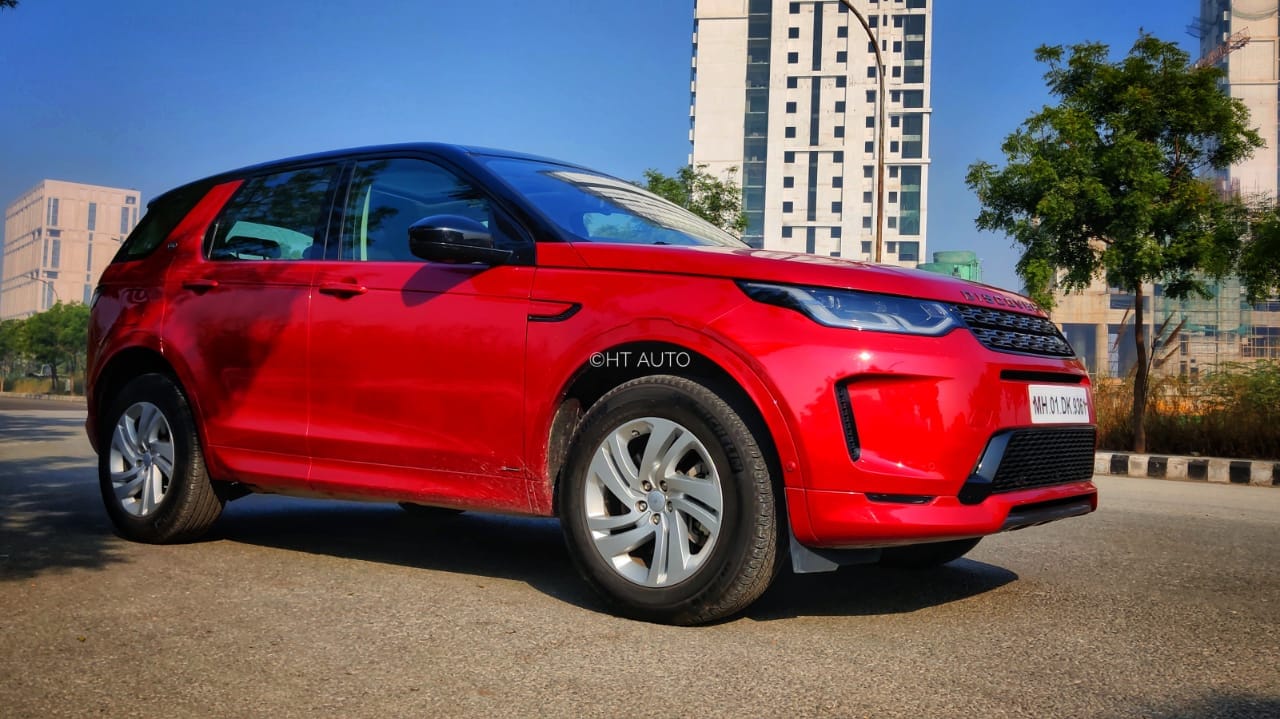 Discovery Sport 2020 is a capable SUV that offers a premium cabin, a refined drive and sophisticated looks - in precisely that order. It has some very, very mighty rivals to fend off against but the fact that it has some credible off-road capabilities is a bonus.

At ₹48 lakh (ex showroom), this SUV makes a solid case for itself and faces off against the likes of Mercedes-Benz GLC, Volvo XC60 and Audi Q5.