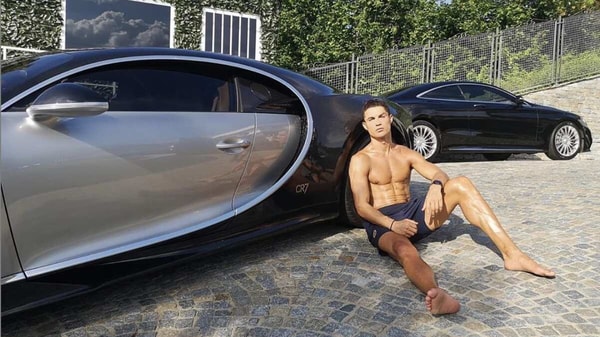 Ronaldo will be one of the 10 lucky owners of a car that is worth nearly ₹75 crore. (Photo courtesy: Instagram/@cristiano)

Portugal’s national footballer and Juventus star Cristiano Ronaldo has bought the world's most expensive car Bugatti La Voiture Noire. Ronaldo, who recently helped his club, the Italian giant Juventus, win the 36th Serie A championship, bought the car for himself as a gift. Produced only 10 worldwide, the Bugatti La Voiture Noire or the Centodieci is worth around 8.5 million euros (approximately ₹75 crore) to its collection.

The star player shared the update from his Instagram account. He also dropped a note saying "You choose the view" with the photo of him posing with the car. The 35-year-old footballer also drew attention to the fact that he wrote CR in his car's initials. The total value of cars in Ronaldo's garage, the owner of the world's most expensive car, is estimated to be 30 million euros (more than ₹264 crore).

You choose the view 😉😅

The Bugatti La Voiture Noire car can speed up to 380 km per hour, reaching 60 km in 2.4 seconds. The car is likely to be delivered to Cristiano Ronaldo by 2021.

Ronaldo buying the most expensive car in the world comes as no surprise, specially because of Bugatti's relation with the football star, Recently, Bugatti and Nike teamed up to present a special ankle boot for Cristiano Ronaldo. The sportswear brand teamed up with the automobile brand to launch the “Nike Mercurial Superfly CR7 Dieci," which are inspired by the Centodieci or Bugatti La Voiture Noire.

ƎB™ 🏎 Introducing the Bugatti x Nike Mercurial Superfly VII CR7 "Dieci" Concept boots. A design inspired by Cristiano's passion for velocity and his love for the prestigious and speedy Bugatti supercars. The boot presents a white fresh look on a blue carbon fiber soleplate. The stylish upper carries Red/Navy Blue detailing and features a five circles symbol on the heel area, a nod to the design of the 10/10 limited Bugatti 'Centodieci' which is Ronaldo's latest heavyweight addition to his Bugatti collection. #GUNT #Gunt22 #NikeFootball #Mercurial #CR7 #Bugatti #Football

The Bugatti La Voiture Noire is the latest addition to an envious collection of expensive cars by Cristiano Ronaldo. He admires luxury cars and is known to have many super cars in his garage. He already owns a Bugatti Veyron Grand Sport Vitesse. Besides the Bugattis, he also owns a Ferrari 599 GTO, Lamborghini Aventador, McLaren MP4 12C. He often shares photos of his cars from time to time with his 233 million followers on social media.

Besides cars, the 35-year-old Portuguese star had also purchased a 5.5 million-pound luxury yacht last June. It is said that this 88-foot yacht has 5 different luxury cabins and 6 specially decorated bathrooms.