At first glance, the redesigned grille on the BMW 4 Series looks enormous, which was originally introduced by the company on the Concept 4 and the all-electric i4.
By : Sabyasachi Dasgupta
| Updated on: 03 Jun 2020, 08:19 AM 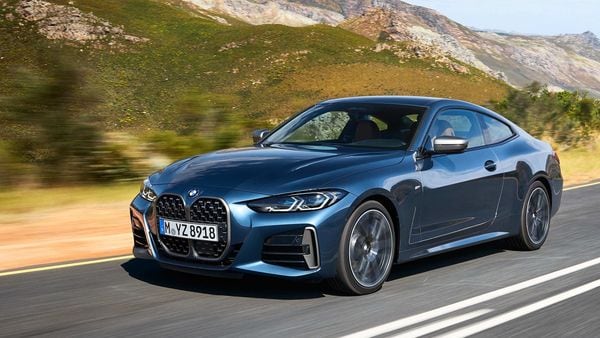 The redesigned front grille stands out as one of the major changes in the new BMW 4 Series Coupe.

German carmaker BMW has digitally unveiled the new 4 Series Coupe on Wednesday. The online presentation of the two-door model offered an insight into the vehicle concept and the car’s distinctive design and freshly honed dynamics.

The new BMW 4 Series Coupe will hit the road in October 2020 – initially in a choice of five model variants, with the particularly potent BMW M440i xDrive Coupe heading the line-up. Among the other variants offered are the 430i and 430i xDrive.

At first glance, the redesigned grille on the BMW 4 Series looks enormous and, for some critics, quite out of place too. Such big kidney grille was introduced by the company on the Concept 4 at the 2019 Frankfurt Motor Show and the all-electric i4.

According to BMW, the new-look grille is “angling forward at the front end of the coupé, the athletically sculpted shoulders above the rear wheel arches, the car’s dynamically stretched proportions and its wide tracks."

(Also see pics: The BMW bucktooth is for real!)

Besides the odd kidney grille, which looks somewhat like a pair of bucktooth, the rest of the design looks quite modern and classy. It gets a sloping roofline like the 8 Series Coupe, sports 18-inch alloy wheels, with the option of a 19-incher, and standard LED headlights across variants. The top-end BMW M440i xDrive Coupe gets darker exterior trim and larger side air intakes.

The new BMW 4Series Coupe has grown in size compared to the 3 Series sedan. The new two-door car is 2.2 inches longer, 1 inch wider and 2.2 inches lower.

The interior of the new BMW 4 Series Coupe is almost the same as the inside of a 3 Series sedan. It gets a 5.1-inch colour display in the instrument cluster and an 8.8-inch touchscreen for infotainment. The Live Cockpit Professional package option allows one to upgrade to a 12.3-inch fully digital gauge display and a 10.2-inch central multimedia screen. Other features like BMW Maps for navigation, Android Auto, Apple CarPlay come as standard across models. It also gets the same BMW driver assistance system as in the 3 Series sedan. Key safety features include lane-departure warning, frontal collision warning, pedestrian detection, blind-spot monitoring, rear cross-traffic alert, automatic high-beam headlights and speed limit information.

As for the powertrain, the 430i model gets a 2.0-litre turbo I4 engine, delivering 255 horsepower and 294 pound-feet of torque. The 430i xDrive comes with all-wheel drive option. Both engines are paired with an eight-speed automatic transmission. The 430i can accelerate from zero to 100 kmph in 5.5 seconds, while the 4-wheel version can do it in 5.3 seconds.

The top-end model M440i xDrive is powered by a 3.0-litre turbo I6 engine paired to an eight-speed automatic gearbox, producing 382 hp of power and 369 lb-ft of torque. The engine is coupled with a 48-volt mild-hybrid battery. The addition of the mild hybrid technology helps in electric boost during acceleration and smooths out the action of the stop-start system. The M440i xDrive can accelerate from zero to 100 kmph in just 4.3 seconds.