The 2021 BMW 5 Series gets several updates on the outside and in the cabin but its great drive dynamics remain unchanged. And that's great.A more plush cabin would have made the BMW 5 Series an even stronger proposition.
By : Shubhodeep Chakravarty
| Updated on: 14 Jul 2021, 12:16 PM 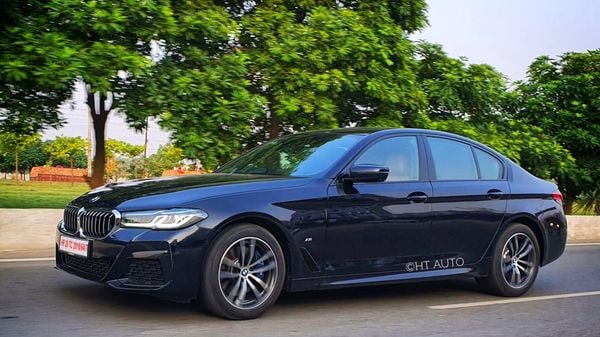 BMW 5 Series 2021 is in its seventh generation and seeks to build on its famed drive characteristics.

BMW 5 Series has been a name with quite a lot of influence when it comes to the D-segment luxury sedan category in the country. A popular choice among those looking at spending far more time behind the steering than plonked on the rear seats, the BMW 5 Series has had a reputation of being a driver's car, much like many of its siblings. And yet, recent times have seen competition become absolutely fierce with the likes of Mercedes-Benz E-Class and Audi A6 upping the ante significantly. Battle lines are drawn and drawn quite clearly and to wage a stronger war, BMW recently drove in the 2021 5 Series in the country at ₹62.90 lakh (ex showroom).

The latest BMW 5 Series gets several updates on the outside as well as in the cabin and I had a chance to spend a weekend with the sedan to figure if it could possibly compel prospective buyers away from Mercedes and Audi showrooms. 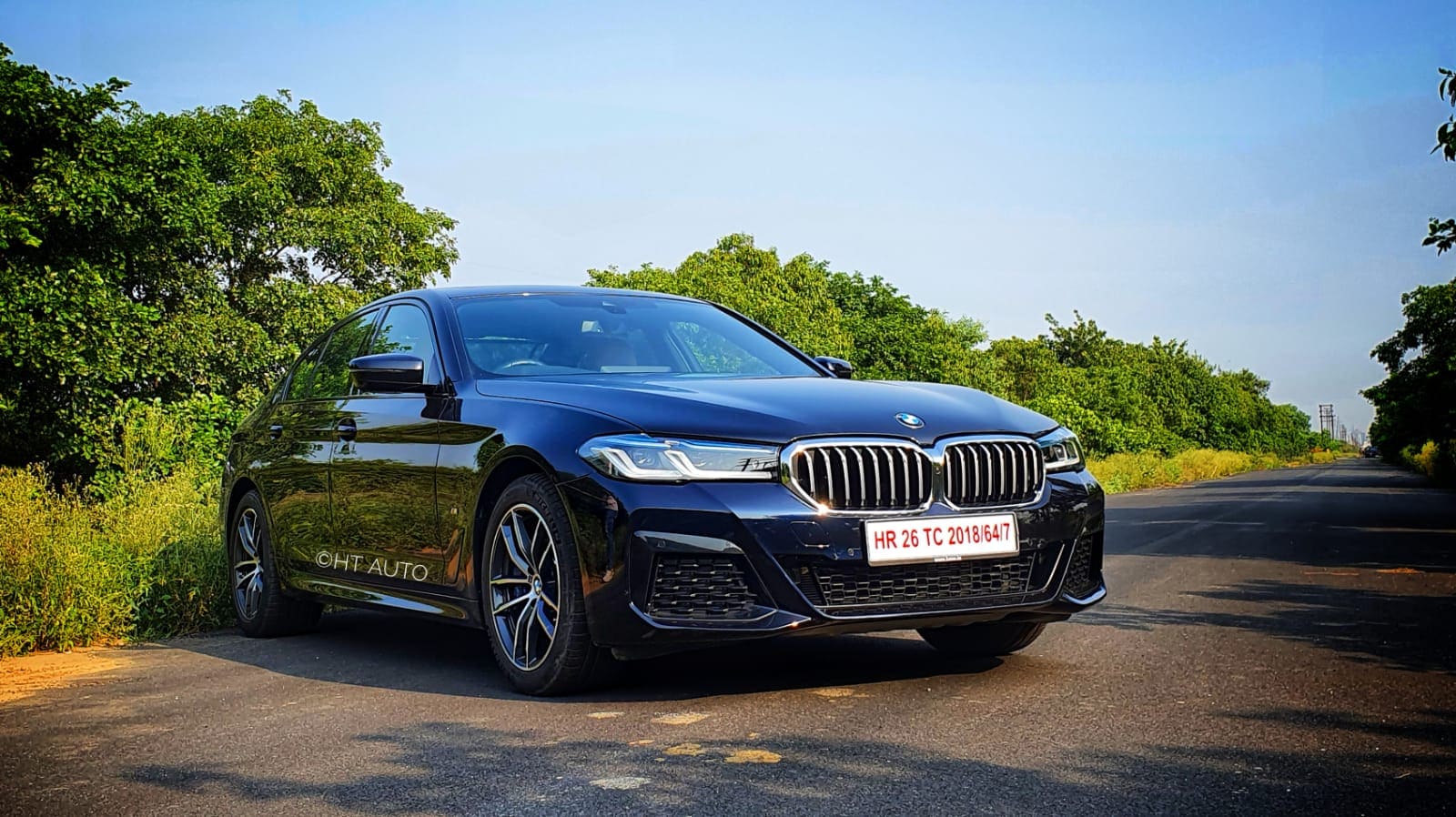 The BMW grille on the latest 5 Series now has an aluminium mat face. (HT Auto/Sabyasachi Dasgupta)

The 2021 BMW 5 Series gets several updates on the outside and yet retains its rather serene visual profile courtesy svelte body lines and well-sculpted curves. The new grille at the front blends well with the re-designed bumpers and very sporty head light units which are incorporated with L-shaped DRLs. Adaptive head lights come as standard while the M Sport variants come with the LaserLight beams.

Over at the back, the LED tail lights have come in for a refresh as well and so have the tail pipes. Not much has changed on the side and the 5 Series continues to sit on 18-inch alloy wheels which compliment the overall visual cue well. 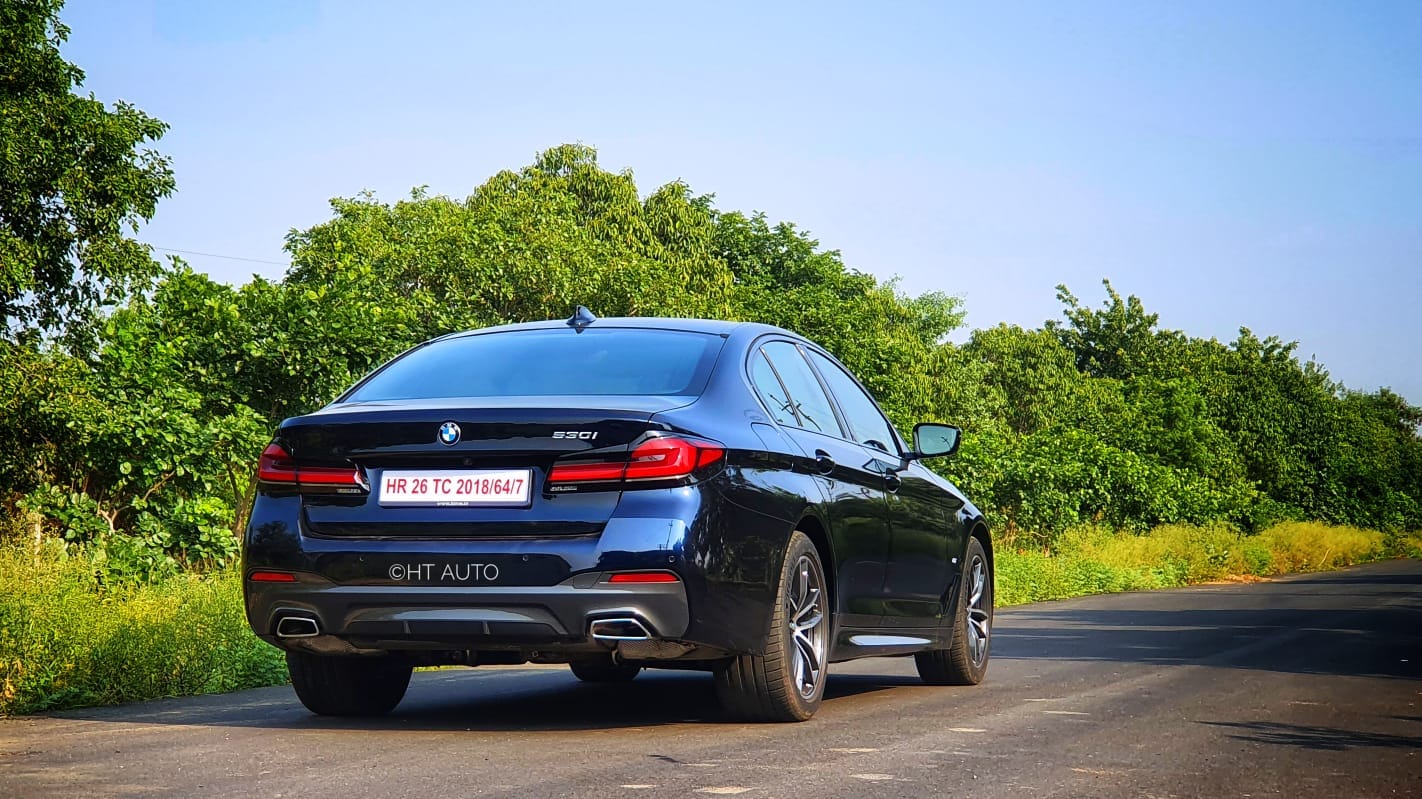 A new diffuser element in the rear apron of the BMW 5 Series has more noticeable contours for better airflow. (HT Auto/Sabyasachi Dasgupta)

The biggest update on the latest 5 Series from BMW comes in the form of a significantly larger 12.3-inch infotainment screen in the cabin. It is several steps in the right direction and the i-Drive system continues to be very intuitive with three ways of controlling it - touch, dial on the central console and gesture. 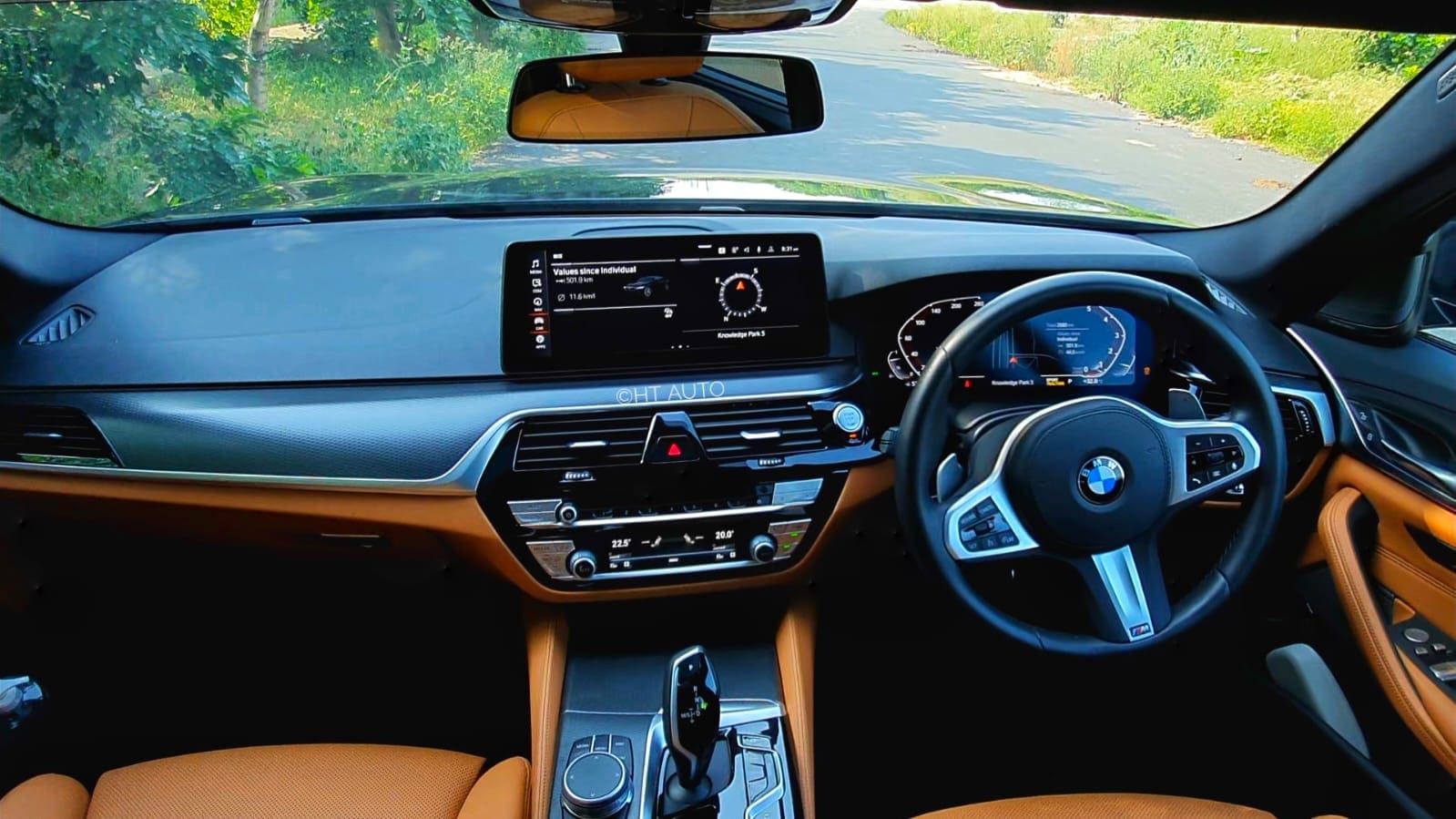 Oriented towards the driver, the cabin of the BMW 5 Series has a neat touch and feel. (HT Auto/Sabyasachi Dasgupta)

The feature list includes wireless support for Android Auto and Apple CarPlay, digital assistant, 360-degree camera and, wait for it, remote park feature. This last bit is also the very interesting bit and does indeed have practical usage. With just a push of the remote key from the outside, one can make the latest 5 Series move forward or back - helpful in tight parking spots or if the car is left where a puddle is formed. In the context of Indian road conditions, I would highly recommend the surroundings are carefully checked before using this functionality. 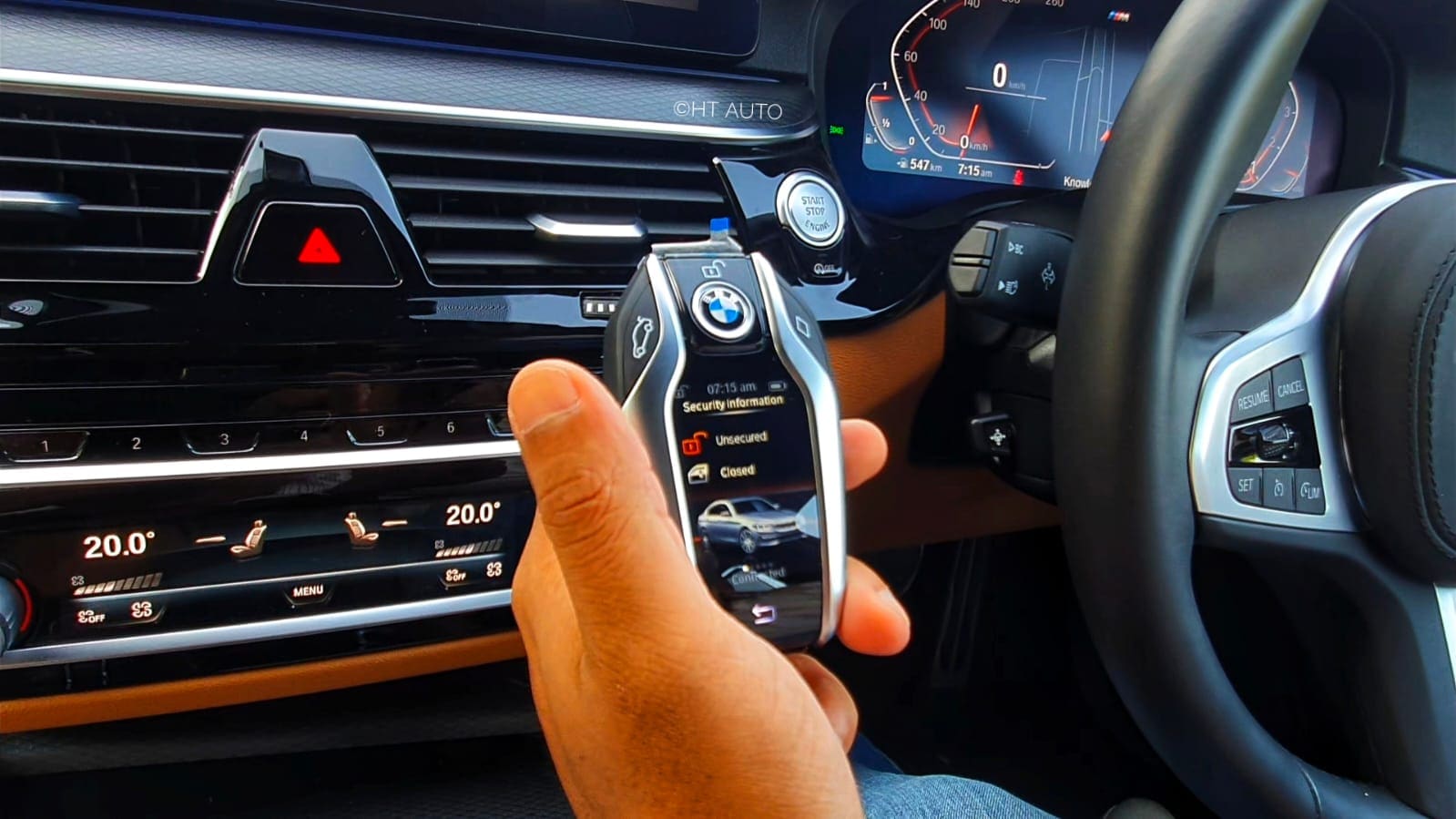 The smart key isn't new to BMW around the globe and it allows for remote operations for air conditioning, ignition and auto forward and reverse from even when outside the car. (HT Auto/Sabyasachi Dasgupta)

The cabin otherwise remains oriented more towards comfort than being outright plush. There is an electronically-operated sunroof, the leather seats are at par for the course and the cushioning and bolstering are decent. I was forced to notice though that after being in the vehicle for around two hours, my otherwise healthy back did become a tad fatigued, a little sore. This has never happened in a BMW and I wasn't sure why it would now. Just as I was about to blame my growing age, my colleagues who were also in the car confirmed their backs weren't exactly peachy either. One of the possible reasons could be that the rear seat is a bit too upright and could have been pushed back by a few degrees.

While if seen on its own, the rear seats may just be good enough for prospective buyer in this segment but if he or she does choose to compare with the latest E-Class, the 2021 5 Series could appear a tad bit plain. Only in comparative terms, legroom is less as this BMW isn't a Long Wheelbase version and overall, perhaps not as opulent.

But won't it be a shame to buy a BMW and to not drive it? Yes, that is exactly where the latest 5 Series seeks to strike back. And strike back strong. There are the same three engine options on offer - 2.0-litre four-cylinder turbo petrol, 2.0-litre four-cylinder diesel and a 3.0 liter diesel motor. Each of these come paired with an eight-speed automatic transmission unit.

The BMW 5 series continues to be a driver-oriented sedan and the bulk of its wooing - and wowing - factor comes from behind the steering wheel. Whether it is embracing the straight line like a long-lost lover or cutting into sharp turns with a sense of vengeance, the 5 Series can handle almost anything that one demands of it when on the move. Sure, the back-seat passengers won't quite appreciate the body roll during speedy turns but hey, don't blame the driver for getting carried away. 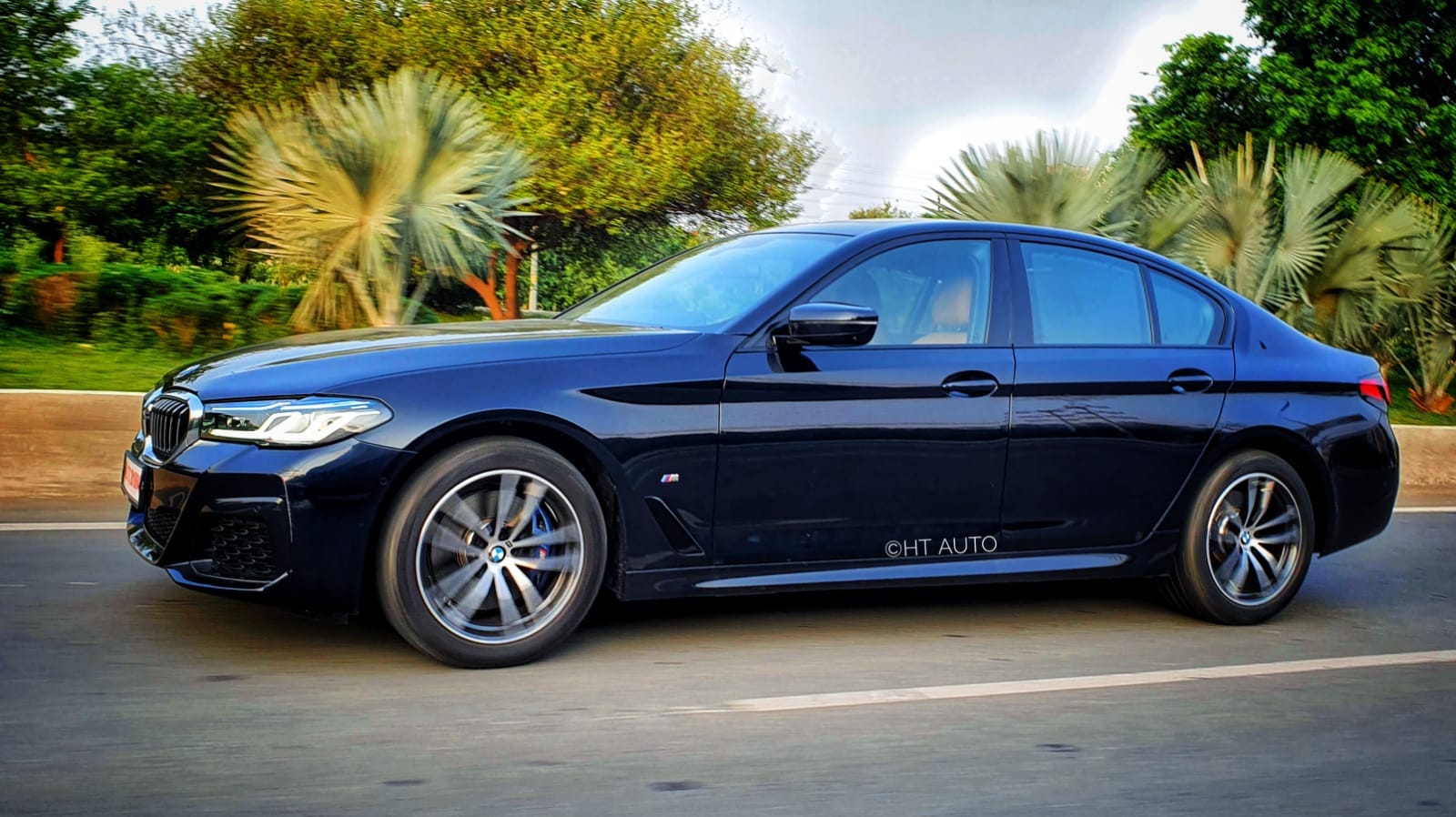 The suspension is done well once again and the meaty steering wheel is the command center ready to respond to whatever direction of driving pleasure the sedan is expected to take. The eight-speed transmission also works well for most parts although we did get the rare jerk in lower gears.

The 5 Series is quite content being in the Comfort or even the Eco mode during city runs but engage the Sport mode and the sedan truly comes alive. There is no doubt in my mind, having driven the car for the better part of two days, that if it is sheer driving dynamics that you are after, it is the 5 Series that is best suited for your thrills in its segment.

Long and winding story cut short, the BMW 5 Series 2021 is a great option for buyers looking at an executive luxury sedan that they would want to drive more often than not. It has got great performance, decent looks and a moderate list of features. But for anyone who may want to plonk on the back seats each time, there are other options in the rival camp.