Mulsanne 6.75 Edition by Mulliner restricted to just 30 carsFlying Spur to replace Mulsanne as Bentley flagshipProduction of Mulsanne limousine to end in this year
By : HT Auto Desk
| Written By : Sabyasachi Dasgupta
| Updated on: 17 Jan 2020, 09:43 PM 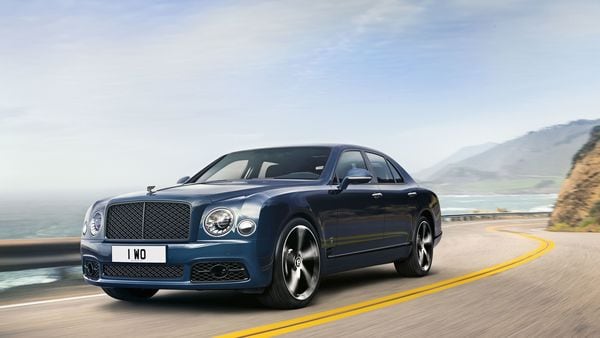 Bentley has taken the covers off its final edition version of the flagship Mulsanne luxury limousine. Only 30 models of the 6.75 Edition by Mulliner will be available before the production of the car ends.

Mulsanne will be based on the existing 530 bhp, 1100 Nm Mulsanne Speed. Under the bonnet, the engine intake manifold will be finished in black instead of the traditional silver. The Engine Number Plaque will be signed by Bentley’s Chairman and Chief Executive Adrian Hallmark instead of the craftsman who built the engine.

The face of the Mulsanne gets a blend of gloss black and bright chrome design elements. (Photo courtesy: Bentley)

The front of the car appears in gloss black brightware with headlamps and tail lamps wrapped in bright chrome. There are dark tint treatments to the Flying B bonnet mascot, Mulliner Serenity radiator grille and exhaust finishers. The 21-inch five-spoke Mulsanne Speed wheel will also feature a unique bright-machined finish with gloss black pockets.

The Mulsanne will be offered in four colours: Imperial Blue, Beluga, Fireglow and Newmarket Tan.

The interiors of the Mulsanne is as plush as can be expected from a Bentley. (Photo courtesy: Bentley)

On the inside, the centre console as well as the rear cabin console will be finished in silver-painted veneer with a metal commemorative plaque fitted to the front console.

The production of the Mulsanne will end with the 30 6.75 Edition cars this year. Chris Craft, Member of the Board, Sales, Marketing and Aftersales at Bentley Motors, said, “While production of the Mulsanne will end in Spring 2020, this decision has been taken at a time when we are experiencing significant customer demand across our other existing model lines. As such, we will be redeploying all of our manufacturing colleagues who currently work on the Mulsanne to other areas of the business."

Once out of production, the Mulsanne will be replaced by the all-new Flying Spur as Bentley’s flagship model in the range of luxurious cars.