World’s fastest SUV gets a new look and W12 powertrain 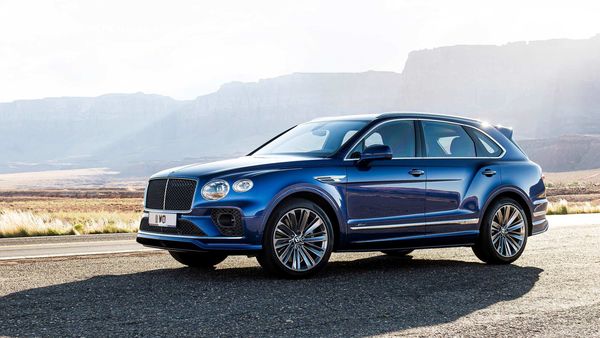 Bentley Motors has unveiled the new Bentayga Speed today with a new look. The world’s fastest SUV may not have improved its top speed of 306 kmph, but it certainly has added more appeal to it. Hand-built at Crewe, the Bentayga Speed combines the W12 powertrain and many luxurious features as standard, including the Mulliner Driving Specification.

Bentley’s Chairman and Chief Executive, Adrian Hallmark, said, “The new Bentayga has already raised the benchmark for luxury SUVs, against which all others are measured. Ahead of the launch of the new Bentayga Hybrid – the world’s only definitive luxury hybrid - in the coming months, it’s important that we still recognise the customer desire for absolute performance. The new Bentayga Speed remains the fastest SUV in the world, but more than that, it’s also the most luxurious version of the new Bentayga – the best of both worlds, the pinnacle."

The new-look exterior has been tweaked to match the elevated levels of performance of the Bentayga Speed. It now sports dark-tint headlights, body-coloured side skirts, unique front and rear bumpers and a striking, elongated tailgate spoiler. Dark-tint radiator and bumper grilles, a unique 22-inch wheel design available in two finishes (painted and dark tint) and Speed signature badging add to the sporting design cues. At the rear, the exhaust finishers are now the oval design that signifies a W12 powertrain. Dark-tint tail lamps complete the Speed exterior signature.

Inside, the Bentayga Speed introduces Speed colour split, which is achieved through the use of dark colours enhanced by primary hide accents running throughout the seats and interior trim. Elegantly crafted ‘swooshes’ of contrast leather swipe around the doors, along the edges of the seat cushions and backrest bolsters, and on the lower console.

The Speed colour split also introduces Alcantara to the cabin of the Bentayga, across the seat cushions and back rest centre panels, gear lever, steering wheel, lower knee trim areas, upper pillar trim and headliner. ‘Speed’ seat embroidery on the backrest of all of the seats is included as standard, and as a no-cost option customers can choose to replace the ‘Speed’ embroidery with that of the Bentley logo.

The new Bentayga Speed also introduces a new, cutting-edge infotainment system. A bigger and brighter, high-resolution 10.9-inch touchscreen, with an anti-reflection and anti-glare coating and much improved touch functionality, now spans the entire width of the centre fascia for a more contemporary look. Navigation is improved with a three-dimensional building display, satellite maps, content in the driver’s next generation Head-Up Display and several other useful features. The Head-Up Display can now project traffic information, street names and distance to destination too.

The new Bentayga Speed now has a fully digital driver’s information panel similar to the Continental GT and new Flying Spur. The display brings a contemporary look to the cockpit, can be customised to the driver’s requirements and features real-time lighting effects with elegant animations.

The new Bentayga Speed is now powered by a 6.0-litre W12 twin-turbocharged engine. The assembly of the new powertrain took up 10 per cent of the total time required to build one Bentley Bentayga Speed SUV. The new W12 engine delivers peak power of 626 bhp and a maximum 900 Nm of torque at 1,500 rpm to 5,000 rpm.

The Bentley Bentayga Speed has a top speed of 306 kmph. It takes just under 4 seconds to sprint from zero to 100 kmph.

Efficiency is also an important aspect of such a powerful engine; to achieve effective cylinder deactivation with the complex layout of the W12, the engine control unit deactivates one complete bank of six cylinders as required. In 5th to 8th gears, when the driver releases the throttle, the car will open the torque converter, dropping the engine to idle and simply allowing the car to roll or ‘sail’. When the throttle is reapplied, or the car starts going downhill and detects an increase in speed, the transmission is re-engaged.

To use this power appropriately the Bentayga Speed is equipped with four on-road Drive Dynamics modes: Comfort at one extreme, Sport at the other and with Bentley mode – the balanced recommendation of Bentley’s chassis team in Crewe – alongside a Custom mode for customers who opt to create their own driving set-up.

Uniquely in the Speed, the Sport mode has been recalibrated to enhance response from the W12 engine and the eight-speed automatic transmission, together with the air suspension system and Bentley Dynamic Ride. The effect is a more dynamic and engaging drive.