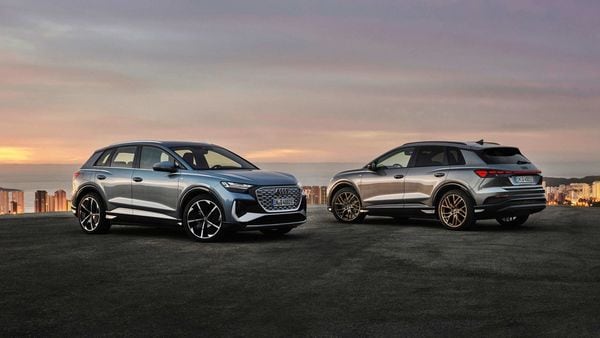 Audi has taken the covers off the Q4 e-tron and Q4 Sportback e-tron SUVs today. The electric SUVs promise to take on rivals like the Tesla Model Y in Europe.

Here is a quick look at 10 key features of the two electric SUVs from the German auto giant.

The Audi Q4 e-tron and its Sportback version are also the most affordable electric vehicle from the brand. The SUVs will go on sale in Germany at a starting price of 41,900 euros (roughly converted to ₹37.72 lakh).

Both these SUVs are based on the same MEB platform used for Volkswagen ID.3 and ID.4. They are also likely to be the first of many electric Audis to be based on this modular architecture.

While the Q4 e-Tron gets the conventional Audi SUV design with roof rails, the Q4 e-tron Sportback looks more compact and has a modern crossover shape. The Q4 e-tron is 4.59 meters long and therefore almost 16 centimetres shorter than the Tesla Model Y.

The Q4 e-tron range gets headlamps that can not only be Matrix LED, but also offer four different designs for the light signature, which can be selected in the MMI touch system. It is a first for any Audi car.

The two new electric Audis feature a spacious passenger cabin , thanks to a large wheelbase of 2.8 metres. The cockpit is fully digitized and comes standard with a 10.1-inch multimedia system screen, while a larger, 11.6-inch one is available as an option.

Audi promises the Q4 e-tron can be recharge its batteries in 5 minutes at DC charging stations for a range of up to 100 kilometers. It goes much slower with alternating current (AC). Then there is a maximum of 7 (35 e-tron) or 11 kW charging power.

There are three variants available for the new e-tron SUVs, which offer a range of up to 520 kilometres. According to Audi, the maximum range is possible with the rear-wheel drive version of the Q4 e-tron.

The drive power of the new e-trons is between 170 hp and 204 hp on the rear axle, depending on the version. In the all-wheel drive variant, two engines with a system output of 299 hp are used, which accelerate the SUV from 0 to 100 kilometres per hour in 6.2 seconds. The maximum speed in this variant is limited to 180 kmph.