The RS7 Sportback that is available globally is more like performance car with its design complementing its character.
By : Sabyasachi Dasgupta
| Updated on: 17 Jun 2020, 06:30 PM 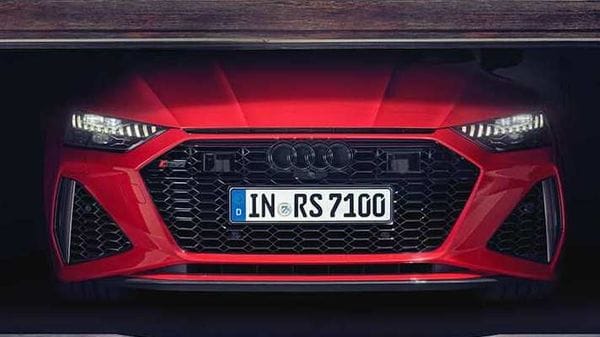 The wider proportion and the aggressive front face of the 2020 RS7 makes it stand out from the A7 cars.

Audi India is all set to drive in the 2020 RS Sportback soon. The carmaker took to social media to share a teaser ahead of the launch which is likely to happen in July.

The post reads, “Made for the racetrack. Launching on-road." An image of the second generation RS7 Sportback was also shared on the official page of Audi India confirming the arrival of the car.

Speaking to HT Auto earlier, Balbir Singh Dhillon - Head, Audi India, had hinted at the launch of the sporty vehicle. He had said, "We'll have more products not just in space of volume but also in the space of sports vehicles. So, you'll see a lot of RS models coming in and also volumes."

When it comes to the RS7 Sportback, it is all about performance. Audi claims the 2020 RS7 can hit zero to 100kmph in just 3.6seconds. The second generation Audi RS7 is powered by a 4.0-litre twin-turbo V8 petrol engine producing 600hp of power and 800Nm of torque. That’s an improvement from the previous generation RS7 which could produce 560hp and 700Nm of torque. The engine is mated to an 8-speed torque converter gearbox. The top speed of the super sedan is electrically limited to 250 kmph, which can be extended to a maximum of 305 kmph.

It also has an option for a 48V mild-hybrid system.

Some of the design elements may seem like the one seen on Audi A7. That is because the RS7 is based on the second generation A7. What makes it stand out from the A7 cars is its wider proportion and the aggressive front face.

On the inside, the RS7 will be loaded with features like dual touchscreen display among others. The spacious cabin of the 5-seater sedan will have Alacantra trim with climate control zones and heated RS seats.

Such performance cars do not come cheap. So expect the price of the 2020 RS7 Sportback to be north of ₹1.5 crore. When launched, the Audi RS7 is likely to take on rivals like AMG GT-R and C 63 Coupe from Mercedes and BMW’s latest 8 Series Gran Coupe.