Audi introduced the updated RS 5 Coupe in the international market in December 2019 with some minor design changes.Expect the updated Audi RS 5 Coupe to be available in India with the same engine and transmission as the outgoing model.
By : HT Auto Desk
| Updated on: 01 Aug 2021, 02:23 PM 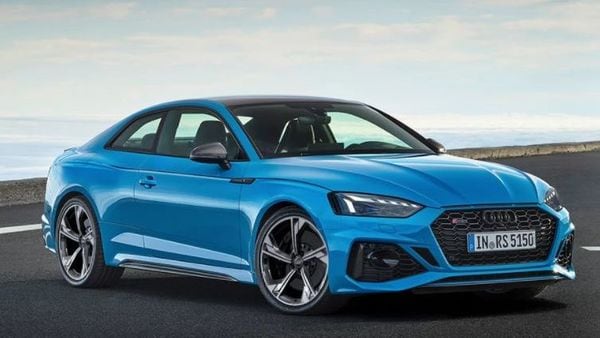 Audi RS 5 Coupe would be introduced in India through the Completely Built Unit (CBU) route.

Audi India has taken to social media platforms to tease its upcoming RS 5 Coupe. The updated 2021 Audi RS 5 Coupe will hit showrooms on August 9, the automaker has announced. It comes on the heels of the S5 Sportback that was launched recently.

Audi RS 5 Coupe would be introduced in India through the Completely Built Unit (CBU) route. The vehicle is expected to be priced at around ₹1.5 crore (ex-showroom). Updated Audi RS5 Coupe was launched in December 2019 in the international market.

The updated performance coupe will come with a host of styling changes. It looks younger and sportier compared to its RS7 Sportback sibling. Among other updates, the updated Audi performance car gets a redesigned wider single-frame grille flanked by revised headlamps. Audi RS 5 Coupe is likely to come with matrix LED lighting technology that is available in the international market-spec model.

It gets 40 mm wider wheel arches making it bolder than the outgoing model. It would come with 19-inch wheels as standard, while 20-inch wheels would be offered as an option. Crisper character lines and redesigned LED taillights too are expected to be there.

Inside the cabin, the upcoming 2021 Audi RS 5 Coupe gets a revised infotainment system. Like the international market-spec model, it could get Audi Virtual Cockpit Plus with a 12.3-inch digital instrument cluster. Apart from that, upholstery and some technological changes would be there as well.

Speaking about the powertrain, the current Audi RS 5 gets a 2.9-litre twin-turbocharged V6 petrol engine under the hood. This engine is mated to an eight-speed automatic gearbox clubbed with Audi's Quattro all-wheel-drive system. The engine is capable of churning out 444 bhp of power and 600 Nm of torque. Expect the same motor and transmission to be there in the upcoming RS5 Coupe. Power and torque output along with fuel efficiency too would remain same as the current model.