Internationally, the e-tron GT is present in two trims including the standard e-tron GT Quattro model and the performance-oriented RS e-tron GT.Some of the key rivals to the Audi e-tron GT include the Tesla Model S and the Mercedes-Benz EQS along with the Taycan of course.
By : HT Auto Desk
| Updated on: 17 Aug 2021, 13:58 PM 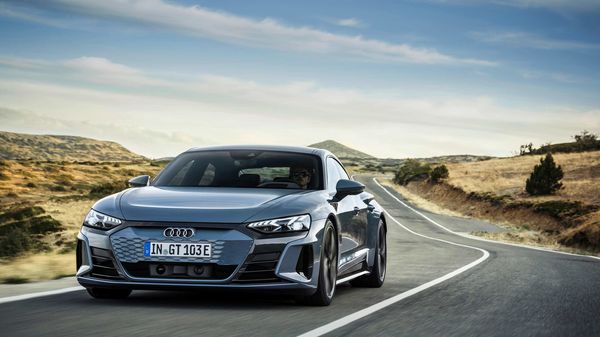 The 2022 Audi e-tron GT is the most powerful EV that the car maker has ever made with 470 hp of peak power.

Audi India has rolled out a short teaser video of the upcoming electric sportscar - e-tron GT that is likely to go on sale in the Indian market in the next few weeks. Previously, the company has already introduced the e-tron and e-tron Sportback electric SUV models in the country.

Some of the key rivals to the Audi e-tron GT all-electric four-door coupe include Tesla Model S and the Mercedes-Benz EQS along with the Taycan of course.

Internationally, the car is present in two trims including the standard e-tron GT Quattro model and a performance-oriented RS e-tron GT. With the launch of the new model, Audi India will become the only luxury car maker in the country to have up to three fully electric models on offer.

In terms of mechanical tech-specs, globally, both the trims of the e-tron GT come with an 85 kWh lithium-ion battery pack. This pack transfers charge to an electric motor delivering 469hp of power in the standard model, while the RS variant develops 590hp. As per official claims, the e-tron GT has a full charge driving range of 487km on a single charge, on the other hand, the RS trim comes with a 471 km of full charge range. Both of these are European WLTP cycle figures. Audi e-tron fires to 100 kmph in just 4.1 seconds. The RS version, quite obviously, is even quicker at 3.3 seconds.

The Audi e-tron EV weighs around 2300 kilos and has been co-developed by Audi and Porsche, both part of Volkswagen group of companies. As such, the e-tron GT and Taycan from Porsche have the same chassis and J1 EV battery platform.