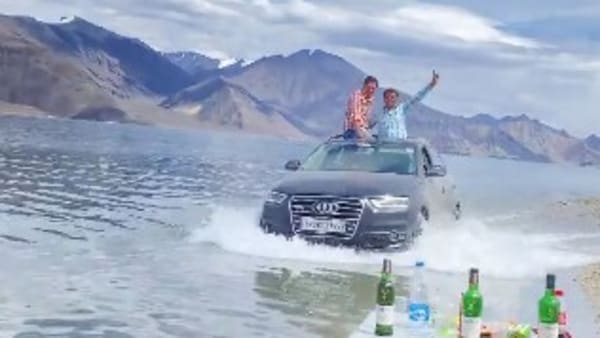 Screenshot from the video. (Image: Twitter/@nontsay)

A video has emerged online showing an Audi Q5 SUV being driven on the shores of Pangong Lake in Ladakh. The video reveals that the driver is driving the luxury SUV in a manner that its wheels are half-submerged in water. The popular tourist destination is considered ecologically highly sensitive and driving a vehicle in the water there is a strictly prohibited act. However, the group of tourists flouted all the rules and drove the vehicle there. The video shows the Audi SUV is registered in Haryana.

(Also read: How long - and loud - is seat-belt reminder alarm in your car? Check criterion)

I am sharing again an another shameful video . Such irresponsible tourists are killing ladakh . Do you know? Ladakh have a more than 350 birds species and lakes like pangong are the home of many bird species. Such act may have risked the habitat of many bird species. pic.twitter.com/ZuSExXovjp

With the video emerging online, netizens reacted angrily against such acts and the people who did this. Several netizens demanded that the police and administration should take strict action against the offenders to create an example so people don't do such acts again.

This is not the first time people have been caught doing such weird acts in places, where the environmental damage could be huge. In many cases, people often drive cars or motorcycles on sea beaches which damages the coastal environment.