Home Auto Cars News At ₹1,105 Crore, This Mercedes Oldie Is The Most Valuable Car Auctioned Ever 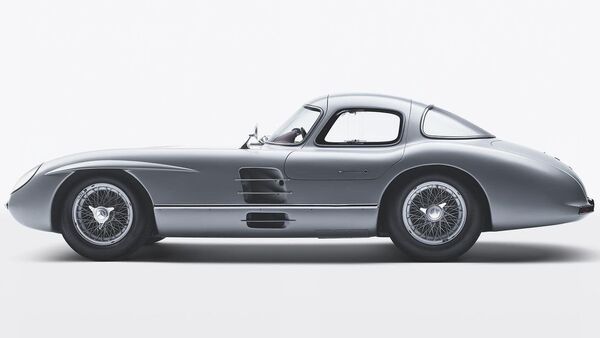 This 1955 Mercedes-Benz 300 SLR Uhlenhaut Coupe is the world's most expensive car ever bought at a car auction.

Forget the Bentleys and Bugattis. If you are wondering what is the most expensive car in the world right now, look no further. Above is the image of the car that was bought at an auction recently for, hold your breath, ₹1,105 crore. Enough to make your jaw drop? Then carry on to find out what is so special about it.

The car you see in the picture is a 1955 Mercedes-Benz 300 SLR Uhlenhaut Coupe. It was sold at a secret auction held by Sotheby's in Germany on May 5. Ola Källenius, Chairman at Mercedes-Benz, said, “We [wanted], with one single act, to demonstrate the power of the Mercedes brand." And it did show. The car shattered the previous record held by a a 1962 Ferrari 250 GTO, which was sold at $48.4 million (roughly converted to ₹375 crore) in 2018. The Mercedes vintage costs three times more than the previous record holder.

Quite obviously, the name of the new owner of this classic Mercedes car has been kept under wraps. The irony is that the new owner cannot flaunt his new buy at his garage or drive it daily despite paying a fortune. The car will remain on display with a second SLR coupe at the Mercedes Museum in Stuttgart as part of a deal struck with the carmaker. The new owner will be able to drive it, but occasionally.

So what is so special about the car? "That car is 100% worth what it sold for—and some people would tell you even that number was low. Nobody ever thought Mercedes would sell it," said Stephen Serio, an automotive broker dealing with rare cars for ultra high-net-worth clients.

The significance of the Mercedes SLR Uhlenhaut Coupe has its links to the origin of the Mercedes brand. The car was closely based on the eight-cylinder Mercedes-Benz W196 Formula One car driven by Argentine star Juan Manuel Fangio to win world championships in 1954 and 1955. Often referred to as the Mona Lisa of cars, the 300 SLR is considered to be a descendant of the so-called Silver Arrow cars that dominated car racing in the 1930s. It later upgraded with a 3.0-litre engine and the moniker 'SLR,' which means sport light racing in German.

Mercedes produced only nine units of the 300 SLR cars ever. Only two were special SLR Uhlenhaut Coupe prototypes named after Rudolf Uhlenhaut, Mercedes’s test department head, who drove one as a company car.

Mercedes-Benz will use the fund to provide educational scholarships in fields relating to sustainability, engineering, math, and science.