Aston Martin Vantage, DBX will be new safety, medical cars for Formula 1 in 2021 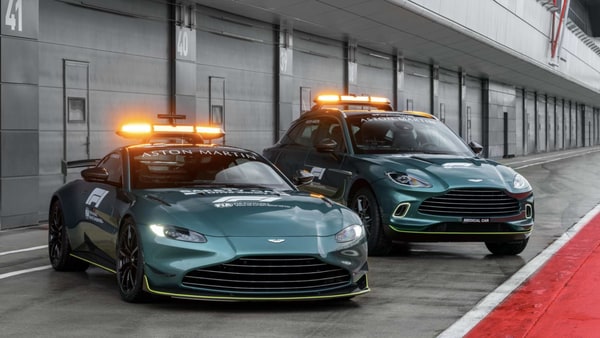 Aston Martin Vantage, DBX will be new safety and medical cars for Formula 1 in 2021.

Aston Martin Vantage will become the official Formula 1 safety car for the first time this year, along with the Mercedes-AMG that has done the job for the past 25 years.

Both manufacturers have been working closely together recently, agreeing on share repurchases and technical cooperation. Mercedes recently increased its stake to 20% and gave Aston Martin access to a full range of its technologies, including powertrain and electrical architecture.

The heavily-modified sports car puts out 528 hp from its twin-turbocharged 4.0-litre V8 engine. The maximum torque is 685 Nm which allows to the Aston Martin Vantage to accelerate from zero to 100 kmph in just 3.5 seconds, as the carmaker claims.

According to Aston Martin, the upgrades to the suspension, steering and shock absorbers also significantly improves handling, as does the dedicated front splitter which creates 155.6 kg of downforce at 200 kmph.

Meanwhile, the Aston Martin CBX has been named as the official medical vehicle for the 2021 season. Equipped with a modified version of the same engine, the Aston Martin DBX develops an output of 542 hp and 700 Nm. This allows the SUV to accelerate from zero to 100 kmph in just 4.5 seconds, and has a top speed of 291 kmph.

#F1 - The FIA is pleased to confirm @astonmartin and @MercedesAMG as official suppliers of the Safety and Medical cars for the @F1 World Championship from 2021.
Full Story 👉 https://t.co/4tAY4JjbVl#PurposeDriven pic.twitter.com/TiElmOv79V

Aston Martin Lagonda CEO Yobias Moers said, “Together with the whole company, I am extremely proud of the Aston Martin brands return to Formula 1, the pinnacle of motorsport for the first time in more than 60 years and represents the start of a significant new era for Aston Martin. To see our acclaimed Vantage, our most dynamic sports car, performing the role of the Official Safety Car of Formula 1 and our first SUV, DBX, operate as the Medical Car on Formula 1 circuits around the world is a proud moment for us all".

The executive Director of Formula 1 Stefano Domenicali said, "We are very pleased to announce our new partnership with Aston Martin and Mercedes, who will provide official deceleration and medical cars for the Formula 1 Championship. They are iconic car brands and we are very proud of their place in our incredible sport."

Aston Martin fans will be able to see the Aston Martin Vantage Official Safety Car of Formula 1 in action for the first time during the three-day pre-season test at Bahrain on 12-14 March, and then again during the opening round of the FIA Formula One World Championship, at the same venue two weeks later.

Mercedes, which has been active in F1 since the 1996 season, will continue with its GT R model and for doctors with the C 63 S Estate model, both with an innovated look for this year (new red paint).