Official release of the vehicle is slated for late 2021 and such is the popularity that even the Dubai Police has made a booking.For markets outside US, Musk hinted at a smaller 'tight Wolverine package' of the Cybertruck.
By : Sabyasachi Dasgupta
| Updated on: 24 Sep 2020, 11:04 AM 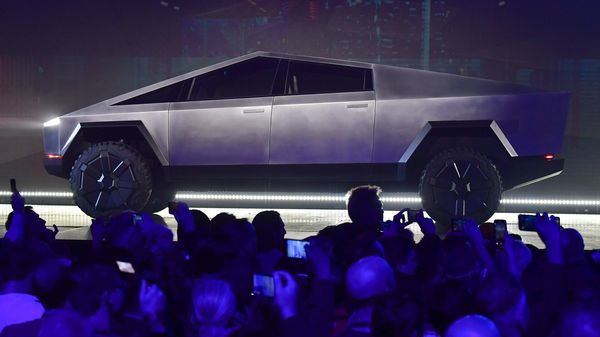 Tesla’s electric Cybertruck seems to be a hit in US as the electric pickup truck clocked more than half a million bookings so far. At Tesla’s Battery Day, Elon Musk said he has stopped counting the number of pre-bookings the Cybertruck has received.

During interaction with audience on Battery Day, Elon Musk said, "It's hard to say what the volume exactly would be for the Tesla Cybertruck. The orders are gigantic, so, we have like, I don't know, well over half a million orders. I think maybe six-hundred. It's a lot, basically. We stopped counting."

Musk also hinted at a smaller version of the Tesla Cybertruck for the global market, since he thinks that the current version is ‘too big’ for customers outside US. He said, "I think we will probably make an international version of the Cybertruck that will be kinda smaller, kinda like a tight Wolverine package."

Recently, Musk called the Cybertruck electric pickup a 'futuristic battle tank’. In an interview, Musk reportedly touched upon the thought process that went into the Cybertruck. "We just made a car we thought was awesome and looks super weird. I just wanted to make a futuristic battle tank — something that looks like it could come out of Blade Runner or Aliens or something like that but was also highly functional," he said.

Tesla chose a Texas site to produce Cybertruck, the model Elon Musk will aim at Detroit’s loyal pickup buyers. The company will build the plant near the city of Austin. The carmaker has for months been scouting locations for a facility that will produce the Cybertruck, Semi and Roadster, all of which are still in development, and the Model Y crossover for customers on the East Coast.

Tesla unveiled a Cybertruck prototype in November, with Musk pitching it as a radically different take on a type of vehicle Ford Motor, General Motors and Fiat Chrysler Automobiles NV count on for much of their profits. The demonstration of what were supposed to be shatterproof glass windows didn’t go as planned but still managed to generate enormous publicity.

The Cybertruck has the potential of charting the future course for Tesla in the times to come. Official release of the vehicle is slated for late 2021 and such is the popularity that even the Dubai Police has made a booking. But Cybertruck alone may not decide the fate of Tesla, a company that is marching forward in a fast-changing automotive world.