Kia launched the EV6 electric crossover in India on June 2, which it already sells in global markets. The Korean carmaker now plans to manufacture an ‘India-centric EV’ in the next three years.
By : HT Auto Desk
| Updated on: 02 Jun 2022, 02:09 PM 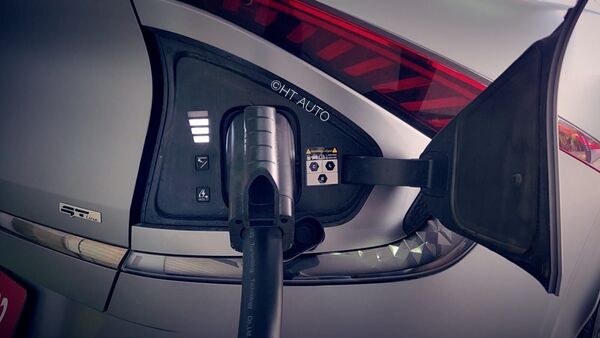 Kia India has announced that the carmaker will launch more electric cars in the country by 2025.

Kia India has forayed into the electric vehicle segment in India with the introduction of the EV6 electric crossover on June 2. Launched at a starting price of ₹59.95 lakh, the EV6 will be offered to Indian customers through the CBU route. That is one of the reasons why the price of EV6 may seem slightly on the higher side. However, the Korean carmaker has assured that it will soon work on an electric vehicle which is likely to be more affordable and focussed specifically on India.

Tae-Jin Park, Managing Director and CEO at Kia India, said that the carmaker plans to invest heavily to increase its presence in the EV space in the country. The carmaker also plans to set up infrastructure and develop new products for the Indian market, including EVs. "We are fully capable of manufacturing EVs for India. The company is evaluating various battery electric vehicles (BEVs) for the market," Park announced.

The ‘India-centric EV’ Park confirmed during the launch event of the EV6, is likely to be ready in the next three years. Kia said that the new electric car, which it said will be an RV or Recreational Vehicle, will be developed from scratch. Kia had earlier launched the Carens which it categorises as an RV instead of MPV. Kia said the new EV will offer unmatched interior features as well as range to address range anxiety issues among EV buyers.

Kia will also focus on affordable electric vehicles, keeping in mind the mass market in India. “The diverse customer base of India inspires us, and our strategy is to be in sync with their aspirations, and our efforts are targeted towards fulfilling the evolved customers' needs," Park added.

Kia said that the Centre's push towards quicker adoption of electric vehicles in the country will help the Korean carmaker shift its focus to electric vehicles. However, Kia said the EV industry in India still remains at a nascent stage and will take time to go mainstream.