The three-row Hyundai Creta is visibly longer in comparison to the regular model.
By : Prashant Singh
| Updated on: 20 Apr 2020, 08:31 AM 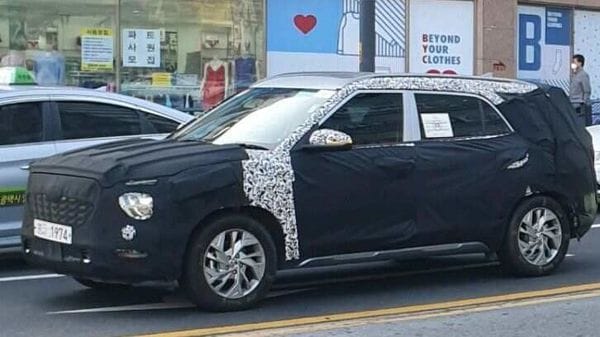 Side profile of the 7-seat Hyundai Creta. Image credits: bobaedream.co.kr

Hyundai is developing a longer 7-seat version of the Creta SUV which is expected to debut later this year. Its development is going on in its home country.

For the uninitiated, first spy shots of the longer Creta arrived a few weeks back (check out here). As the new image suggests, the three-row Creta is visibly longer in comparison to the regular model. For the record, the current SUV spans 4,300 mm in length. Moreover, the new Creta looks tad taller too.

As revealed previously, the longer Creta will boast a slightly tweaked front fascia. It will feature a unique solid chrome mesh grille with a pattern similar to that seen on the Kia Carnival. On the lower section it will also feature a new bumper and it will get front parking sensors unlike the regular model.

The side profile will make use of distinctive roof rails, large sized quarter-glass, side sill garnish, while the 17-inch Clean Silver alloy wheels, however, remain unchanged. Its window line will also get chrome highlights.

Its roof-line looks quite flattish which shall provide decent headroom space for the last-row passengers, also elevation of the beltline won't be very aggressive at the rear.

It will feature a very conventional looking tail-end with mildly raked rear quarter glass. In comparison to the regular model, it will boast wider, split tail lamps which will be LEDs and the tail gate will look slightly more upright. What remains to be seen is that it it gets reflective strip at the centre or not.

Its engine option will be most likely be carried over from the current model which runs on a variety of options such as a 1.5L naturally aspirated petrol, 1.4L turbocharged petrol, and 1.5L turbocharged diesel engine. Also the transmission options including a 6-speed MT, 7-speed DCT, CVT and 6-speed AT unit may be part of the kit. AWD will not be included, at least not in the Indian-spec model.